Hello, Dawg fans! Where do I start? There is so much activity going on at Husky Stadium, it's rather hard to organize my thoughts and decide where to start. The most obvious change this week is the continuing work on the roof. Last Sunday there was one roof section in place, this week the half of the roof is in place. I expect they will finish putting up the steel for the roof this next week, the big question is what do they work on next? We might have got a glimpse of that today as they started digging to continue the lower wall of the west lower bowl. They even started back filling the south west corner of the stadium.

One part of the stadium construction that is hard to keep track of is the Montlake side of the Football Facilities Building. I was able to find this picture on Flickr, showing the progress being made on the outer skin of the FFB. Below is the usual collection of Web Cam pictures, don't forget to click on the pictures for the full resolution image (you'll need it to see some of the smaller details) and keep an eye on the Oxblue Web Cams for yourself. 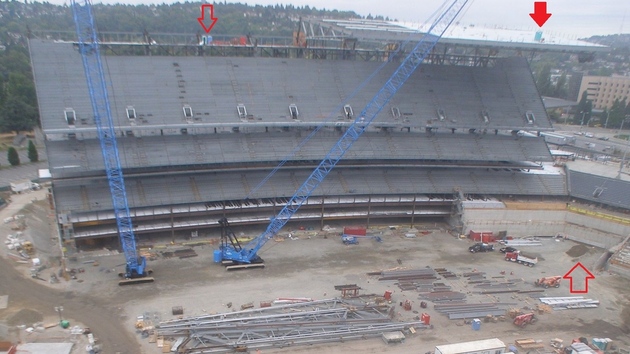 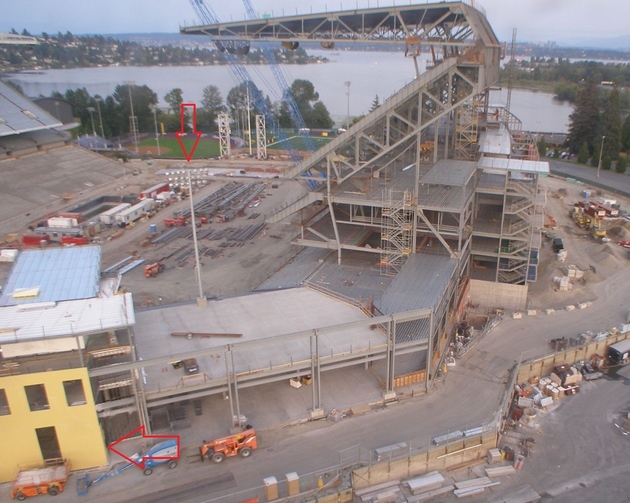 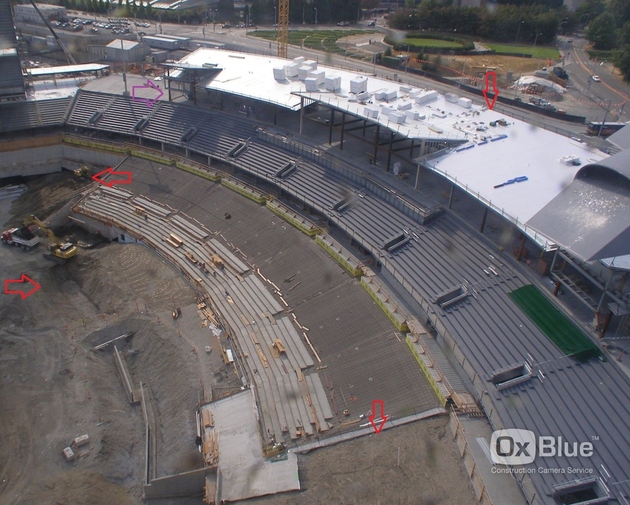 There is a lot going on in the west stands. The arrow at the bottom center of the picture is pointing at the dirt that they just finished back filling, meaning the north lower bowl is basically ready for concrete risers. The upper most arrow is pointing to the area they have started to back fill for the south west corner of the lower bowl. It will take a LOT of dirt, but they still need to drop the field four feet, which will be a LOT of dirt. The arrow on the left side of the picture is pointing at the continuing excavation for the lower wall of the lower bowl. Now that the west half of the roof is in place, I expect they will keep wrapping their way around the stadium preparing the south lower bowl. 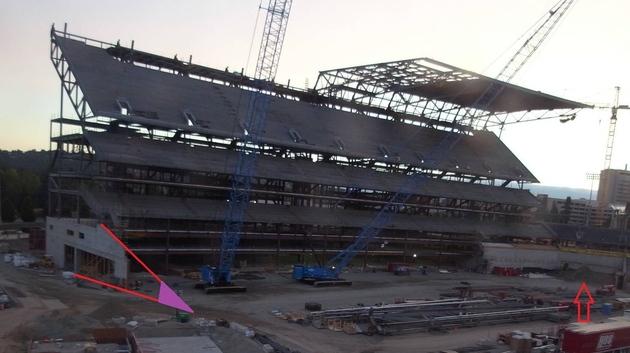 The steel skeleton of the south stands is 97% complete. They should have the rest of the roof in place by this time next week. After that the work on the lower bowl can start happening. The red lines on the left side are to illustrate approximately how far out the lower bowl will come. The red lines will be more steel skeleton connected to the current structure, the purple triangle is approximately the amount of area that will be back filled with dirt. The red arrow on the right side is pointing to where they have started back filling that corner of the stadium, which should continue around the corner to the edge of the concrete tunnel which leads into the sports medicine facility. 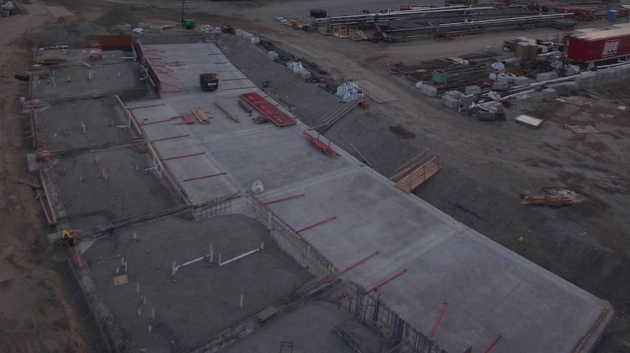 This week they poured part of the concrete floor of the east stands, which will contain restrooms and concession stands underneath the stands. This is a great picture to illustrate how much dirt will have to be moved to lower the field down four feet, or approximately where this concrete floor is located. 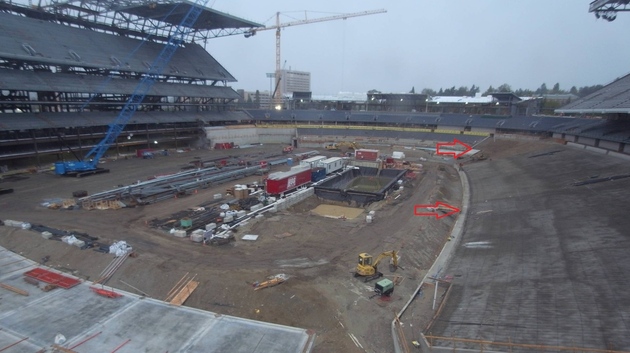 The north lower bowl is basically ready for the concrete risers, they even poured the lower concrete row this week (lower of the two arrows). The upper arrow is pointing to the area where they are just finishing the back filling. A little rebar and Shotcrete and it will be ready for concrete risers too. You can see how they've started on the lower right side of the picture and are working their way around the stadium working on the lower bowl. 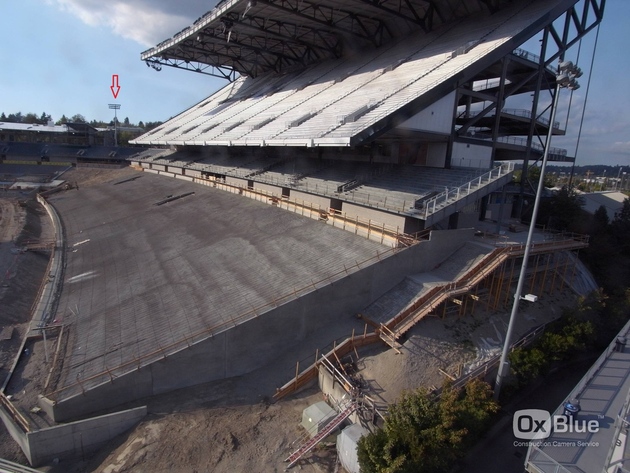 There hasn't been a whole lot of changes here, but that could start changing this week. It should be interesting to see how long it is before they start pouring the concrete risers of the lower bowl. The red arrow is pointing to the new stadium lights that were just put into place on Saturday.

When somebody tells me the project is on schedule, I don't just believe them, I double check to see if they are telling me the truth. The good news is they aren't blowing smoke up our backsides, they are on schedule or even ahead of schedule. According to this, which was published months ago, the raising of the steel skeleton of the south stands was scheduled to go through the end of October. By the end of September, the only parts that won't be in place will be the pieces for the rest of the lower bowl. A pretty minor amount of work compared to what has already been accomplished. Next up is the outer skin of the south stands and continued work on the lower bowl.

It won't be long before the work moves inside and the visual changes will die down significantly. Just a heads up, the weekly updates will become bi-weekly updates in the next month or so. That's it for this week, GO DAWGS!!!