Hello, Dawg fans! What better way to spend a Sunday morning after a Husky win, than looking at another update of our beloved Husky Stadium! It really is amazing the amount of work that can get accomplished in one week. Last week they had four upper deck sections in place, with minimal support steel in between them. This week, all ten upper deck sections are in place, five with minimal steel and five with all support steel in place.

Late this week they added an extension to the tallest of the two cranes, which led me to think they might start putting up the roof trusses. I tip my cap to busterv for reminding me that they will probably need to put up some of the metal flooring near the top of the upper deck before they put the roof trusses in place. The very next morning they started installing the metal flooring for the "lower upper deck" (the row of seats below the upper deck and above the middle deck).

Below are the usual series of pictures, including a few design schematics. Be sure to keep an eye on the Oxblue Web Cams, I wouldn't be surprised to see the roof trusses start going up this week. Don't forget, clicking on the pictures will get you the full resolution image. Credit for the different colored arrows once again goes to my four year old daughter, she just loves to sit on my lap and look at pictures of the stadium construction!

Web Cam #1 - The difference a week makes! You can see the right side of the upper deck has most of the support steel in place. The upper arrow is pointing at the floor of the press box (much easier to see in the full resolution image). The lower arrow is pointing at the "lower upper deck" where they have filled in all of the open sections and have started installing the metal flooring. 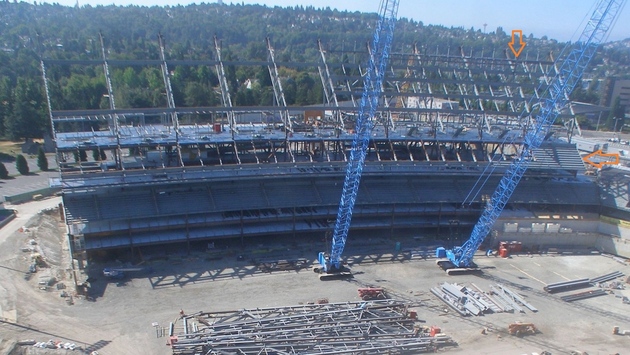 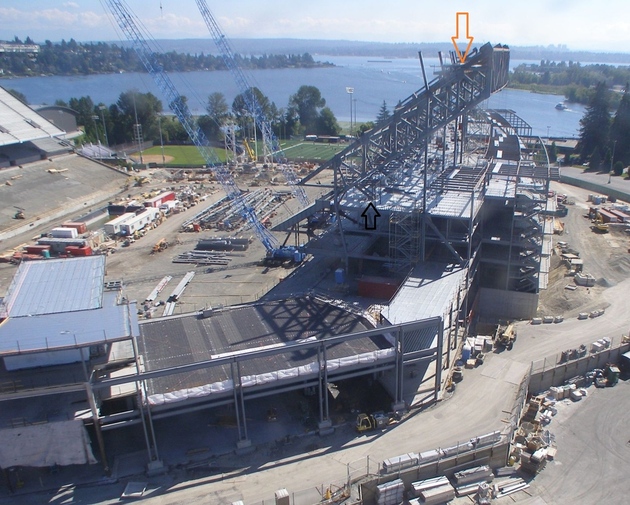 Design Schematic of the Press Box - If you look at the picture from Web Cam #1 and this schematic, you'll notice the press box extends over most of the upper deck, but doesn't extend to the end sections.

Web Cam #3 - The west endzone stands have seen more noticeable activity this week. The red arrow is pointing at the upper area of the lower deck, they have started covering those raised areas with corrugated metal, which means they'll get likely to be covered with concrete. I expect that to be the A.D.A. seating sections. The black arrow is pointing the color change in the middle deck. The metal floor to the right of that line has been painted, I am assuming that will be the final color. The lower green arrow is pointing to staircases that were delivered a few weeks ago. I'm wondering if they are for the access to the lower bowl from the football field. The purple arrow is pointing to the area highlighted in the next picture. 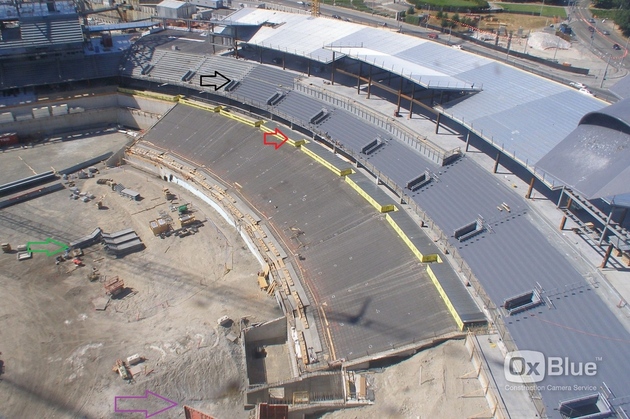 Web Cam #3 Close Up - Here they are working on finishing the tunnel. The brown arrow is point to the small section they just closed up, finishing that small room. The red lines show where the wall will continue out to and the front edge of the lower bowl. The blue arrow is pointing at the markings they will use for pouring the concrete risers for the lower bowl. These markings are very different from the markings they were using for the first three concrete rows, which makes me wonder if they will start using the large metal frames to pour the rest of the concrete rows. 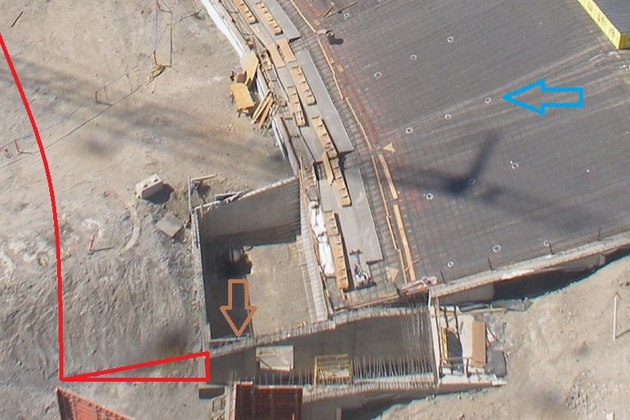 Design Schematic of the tunnel - You can compare and contrast the two pictures, it really helps to show how much more roof they need to finish on the tunnel and how far down the lower bowl will extend. 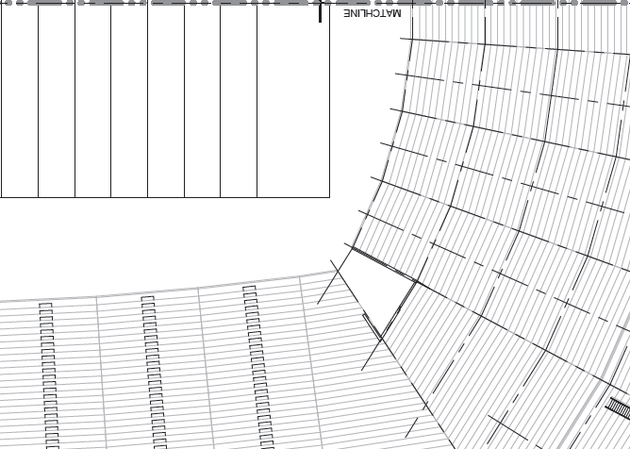 Web Cam Angle #1 - The south side just keeps on growing! If you take a close look at the upper right side of upper deck, you'll see the floor of the future press box. Having two large cranes on site has definitely sped up the progress. 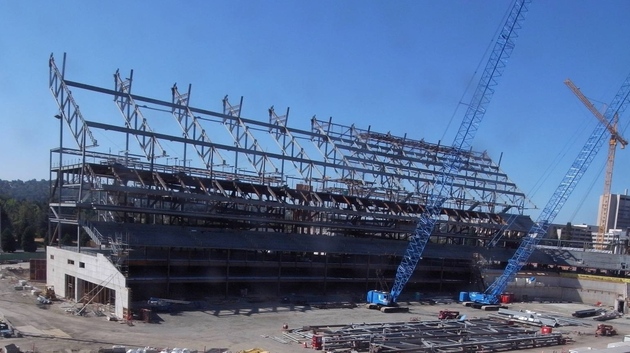 Web Cam Angle #2 - There's not much in this picture that can't be seen in the others, it's just a great view of the stadium taking shape. 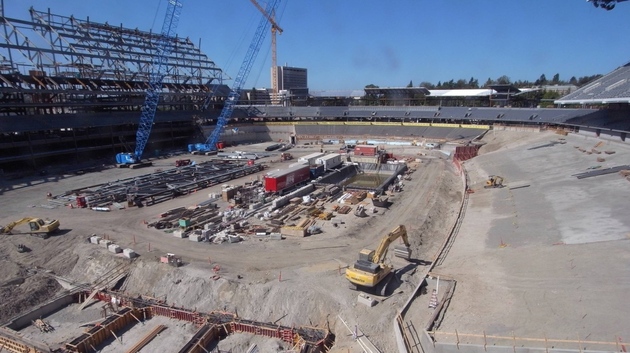 Web Cam Angle #3 - The grading of the lower bowl is nearing completion. The white arrow is point at the point where the grading has basically been finished. Once the forms are removed from the tunnel walls, they will be able to finish grading the north lower bowl. The black arrow is pointing at the raised sections that just had the wood forms removed this week. Another sign that rebar and concrete aren't that far away. 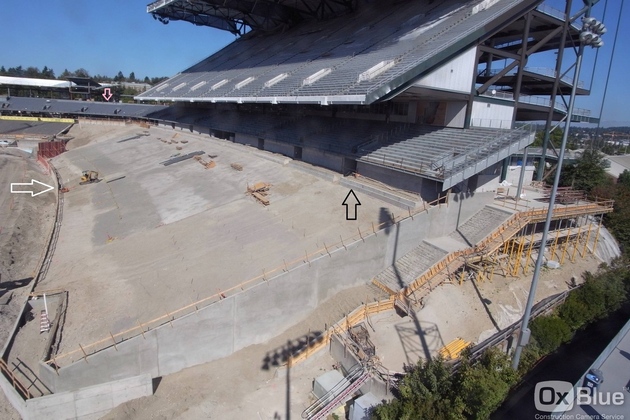 That's all for this week Dawg fans. Check back next week at the same Dawg time and the same Dawg channel for your weekly Husky Stadium update. GO DAWGS!!!