You read that right, this is the last Husky Stadium update of the summer. Next Sunday, September 23rd is the first official day of fall. Where does the time go?? This week's update is going to be a progress report of just how much work has been done from the first day of summer until now. While putting this together, I found it rather remarkable just how much has changed in three months. Another big date is rapidly approaching. In less than two months we will be at the one year mark since construction began.

If you thought things were exciting at Century Link Field yesterday, things were just as exciting at Husky Stadium. In just one day, they were able to raise the first two roof trusses and all the support steel to go between them. It's a fun process to watch, if you haven't had the chance, go to the web cams at http://oxblue.com/open/huskystadium, and click through all the pictures from yesterday to see the trusses go into place. I was really surprised to see the first truss in place, mainly because I was in my car driving south on I-5 at 7:45 am when I first saw they had put it in place. As always, don't forget to click on the pictures, if you aren't looking at the full resolution image you are missing a lot of details. 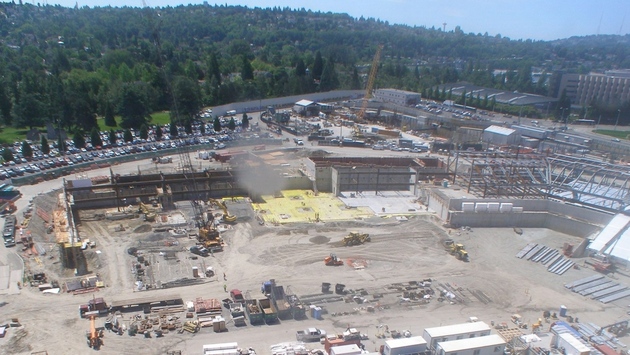 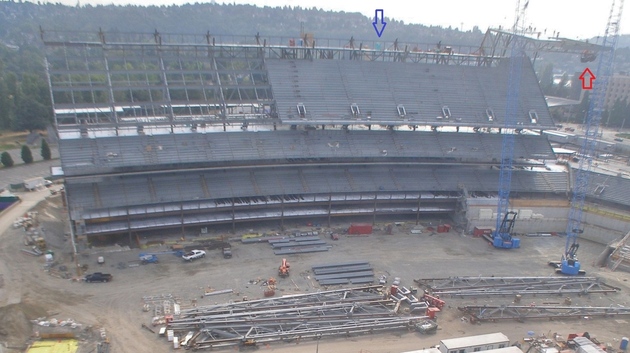 I'm sure you can see the few minor changes that have taken place! One summer equals one steel structure for the south stands, not bad, huh! Thanks to the much improved performance on Saturday, you get your arrows back. The blue arrow is pointing at the Honey Bucket with the best view in the entire USA. The red arrow is pointing at the speakers that have already been put up under the new roof. Talk about efficiency! 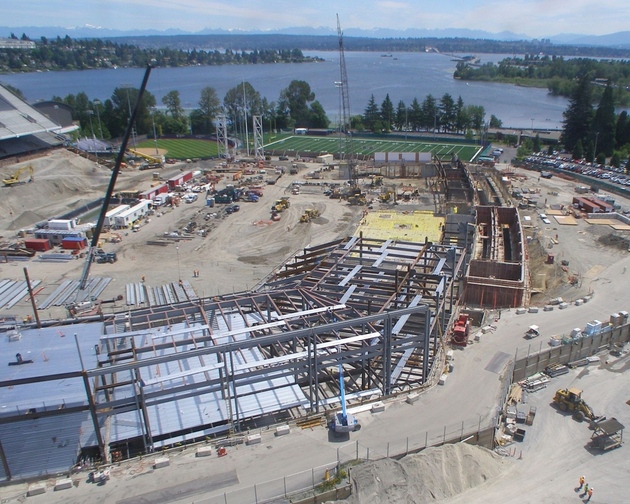 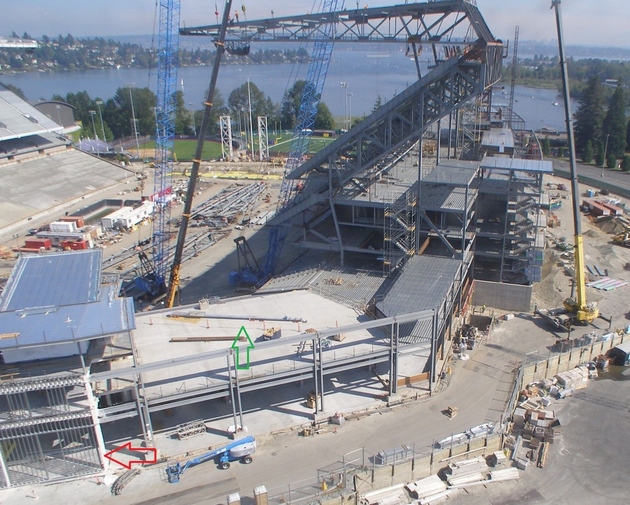 Who needs words, just a beautiful sight! Obviously you can see the new roof, which looks rather large from this angle, don't ask me why. The red arrow is pointing to where they have started working on the outer skin of the Football Facilities Building. It's hard to tell from the Web Cams if they are just starting the skin, or just finishing. Anybody been on campus lately? I'd love to hear what it looks like from Montlake. The green arrow is pointing at a large pole, almost looks like a light pole. I'm rather curious to see where it will end up. 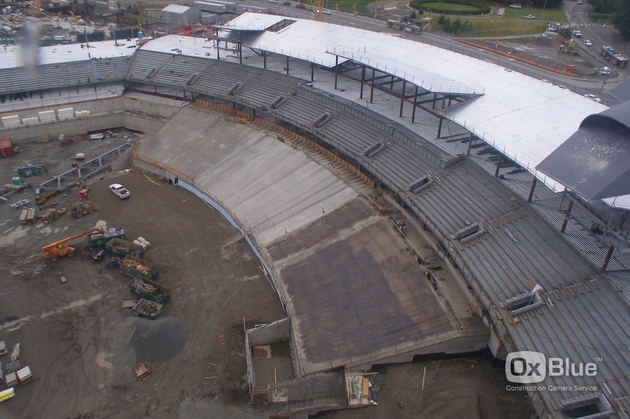 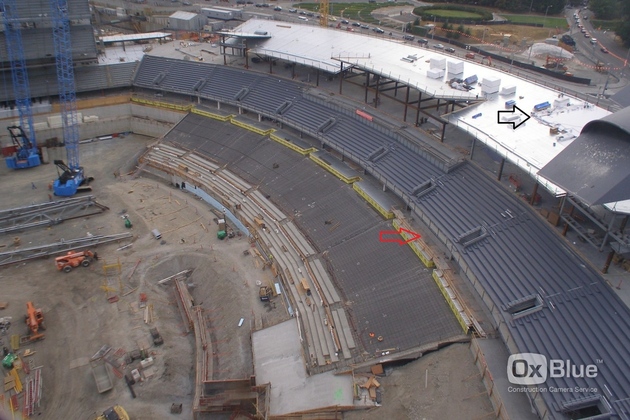 There is not as much noticeable difference here, mostly because the FFB had been mostly in place by June 20th. They are starting to make better progress on the concrete risers, not to mention finishing the tunnel and pouring the concrete for the lower wall. Next up will be back filling the rest of the lower bowl and continue working their way south. The red arrow is pointing at the walls in they started building in the main concourse (future restrooms) and the black arrow is pointing to the area where they have begun finishing the roof of the FFB. 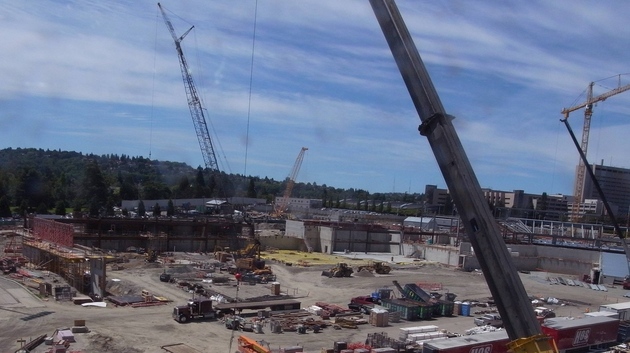 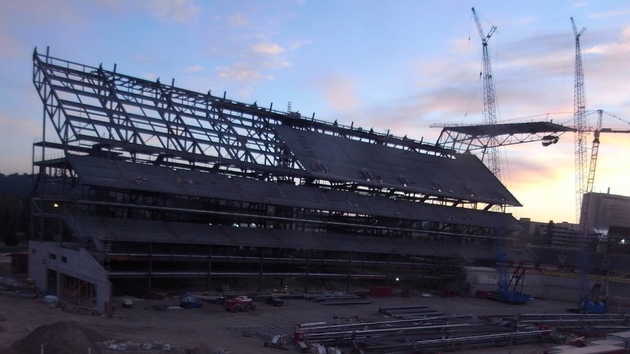 Again, just a few minor changes! Not to mention a gorgeous sunset shot with the new roof going up! 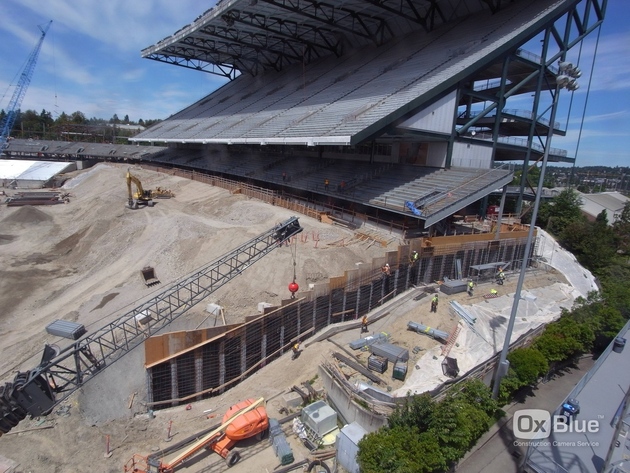 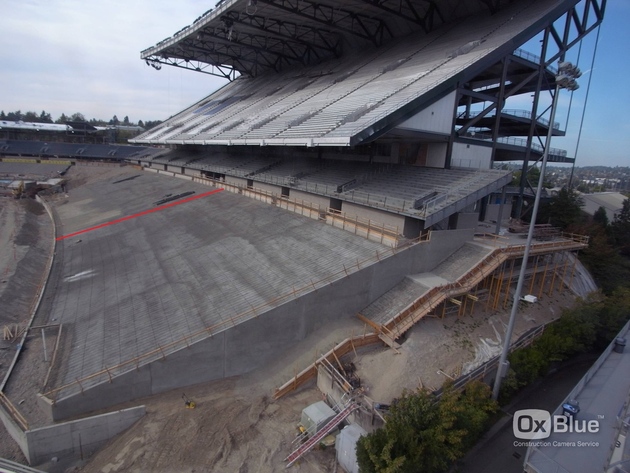 East End Stands - The foundations are basically finished. The yellow tarps are a sure sign that the concrete floor isn't far behind. They just need to lay the rebar and then pour the concrete. 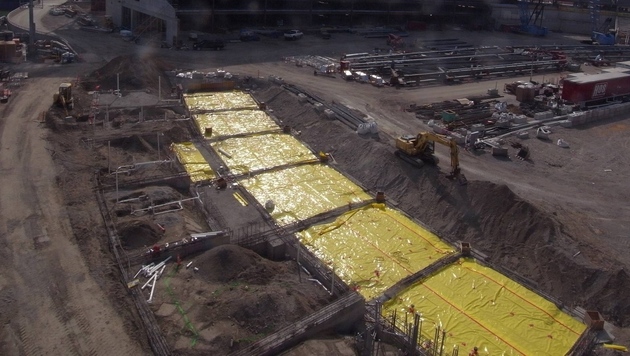 Post summer grades: I give the everybody on the construction teams an A++++. How can you not be thrilled with the progress being made, not to mention the project being on budget too.

That's it for this week, check back next week for another update, things are changing fast!! GO DAWGS.