So, it was brought up in the comments a couple days ago about the recruiting numbers and how they'll shake out with a small senior class this season. I'm not here to answer any questions, but here's a little chart to aid that discussion. 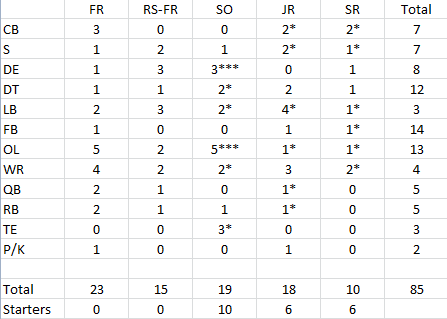 You can see where the obvious holes are (tight end down the road, maybe corner in a year or two). Contrast with this, where you'll see 18 commits already for 2013, and they're not done yet.

The stars are, for the most part, indicative of where the starters sit in terms of their classes. Generally more than 11 offensive players are selected, but with no clear third receiver to thrust forward I left that at two. Obviously there is some extreme fungibility here, as no freshman has earned a starting spot -- something I expect to change between now and September 1st -- and we know that just because someone isn't a starter doesn't mean they don't play a ton of downs and contribute. It's just a guide.

There are, right now, only 10 scholarships available for the 2013 class. That'll get bigger as players move along or retire, and there are also scholarships that a couple non-senior walk-on's are occupying (Hudson and Chandler for sure, chime in with any others in the comments).

The future looks pretty good as the classes and depth continue to backfill, and if indeed 10 sophomores become starters that bodes very well for the future of the program, though it could mean accompanying growing pains this season.