Husky Stadium Update - The Upper Deck: Past and Present

Share All sharing options for: Husky Stadium Update - The Upper Deck: Past and Present

Hello, Dawg fans! It's been an exciting week for us web cam voyeurs. Wednesday afternoon saw the first upper deck steel truss put in place and it's been progressing at light speed ever since. On top of that the local media were given another tour of the stadium construction process, which always leads to a plethora of pictures. To start off this week's stadium updates, I'm going to steel . . . .oops, I mean steal an idea from Gekko and give the first ever (and possibly the last ever) Husky Stadium Dots . . . . .

The Seattle PI has a very nice collection of photos from the media tour.

The Seattle PI also has a very fun interactive Panoramic View of Husky Stadium taken from the FFB.

Now that you've had two helping of Dots today, let's get on to the Husky Stadium update. As always, be sure to keep an eye on the progress yourself at the OxBlue Web Cams and at the Husky Stadium website. Don't forget to click on the pictures to see the full resolution images. First up this morning is another Lear Pilot original time lapse video. This is an updated version of the Web Cam #1 video I posted a few months ago, obviously there have been some very recent and major changes!

Picture #1 - Here is the view from Web Cam Angle #1 at dawn this morning, showing the new south upper deck that is going into place. In just three and a half days they have already put up 5 out of the 11 steel trusses. That being said, there is still a LOT of steel that needs to go in between each truss. For example, look at the section furthest to the left to see just how much goes in between to support the upper deck. 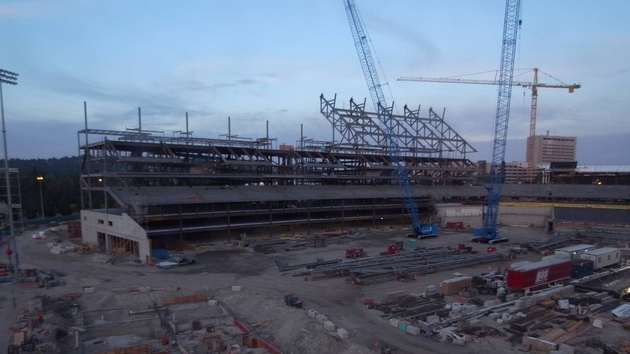 PIcture #2 - The view from Web Cam #2 looks just a little different from last week, you can see the changes?? The large black area is the South West event deck, the construction crews are sealing it much like the lower bowl in the west end of the stadium. The upper red arrow is pointing to the steel supports that will hold up the roof. I'm also thinking that they will be used to enclose the media area that has traditionally been in the same place. 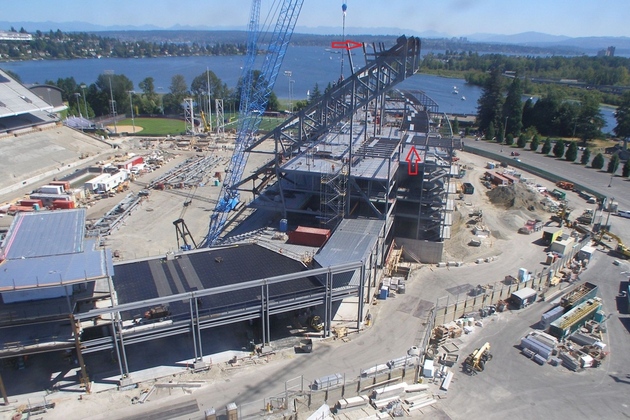 Picture #3 - Web Cam #3 doesn't have any major changes over the last week, but a lot is still happening. The upper red arrow is pointing at the first concrete row for seats. It looks like they are going to pour each row one at a time. They built wood forms and set them on the first row and then put what looks like 5 gallon buckets (presumably filled with sand or water) on top of the forms to hold them in place as they pour the second row of concrete. The lower arrow points at the final section of the tunnel that is being built. That should give you a really good idea of how much further out the lower west bowl will be extended. 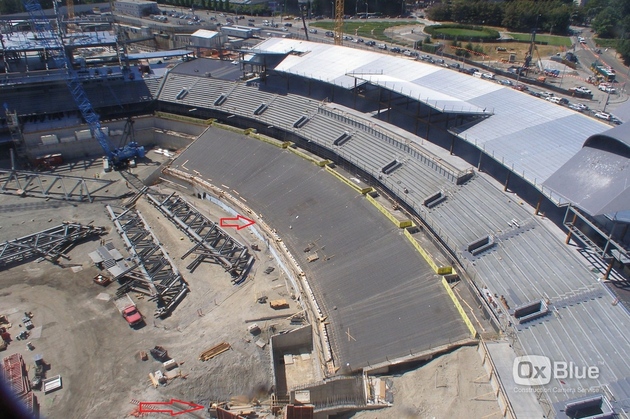 Picture #4 - The view from Web Cam Angle #2 - Yep, it's starting to look like a stadium! On the lower right side you can see where they have begun to back fill right up to the lower bowl. Once they finish the area where the wall connects to the tunnel, then they will finish back filling the lower bowl, finish grading it and then add the rebar and start pouring the concrete rows. 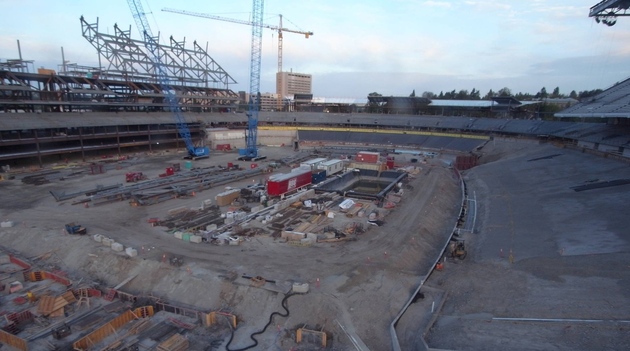 Picture #5 - The main view of the south side stands. The upper red arrow is pointing to all the steel that goes into place to support the upper deck. The lower red arrow is pointing at one of the middle deck sections that had previously been left empty, but has now been completed. There is a picture from Web Cam #2 on Tuesday or Wednesday, showing one of the big blue cranes angled through one of those open sections. 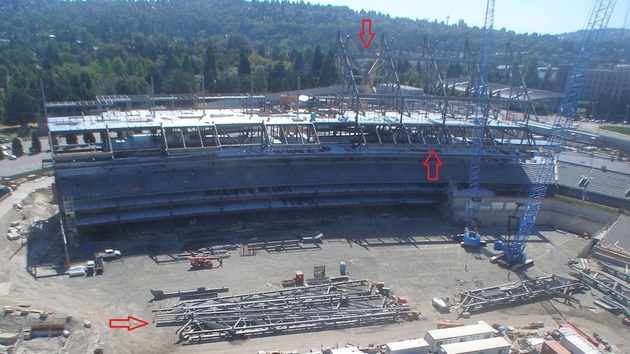 Picture #6 - A blast from the past. A picture from Web Cam #1 taken in 1949 (or so) of the construction of the original south upper deck. Because they didn't have a north upper deck, the web cam was at a much lower position. Do I need to use my sarcasm font on that last sentence or two?

The most interesting part to me is the different construction techniques used, but also, how similar it seems. You can see that the steel trusses for the roof were only partially assembled when they were put in place, compared to now when they are completely assembled. 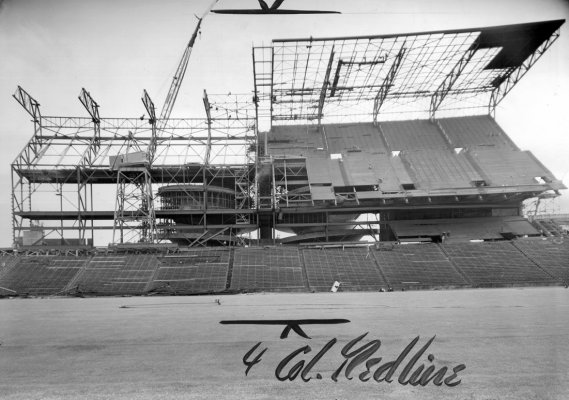 Picture #7 - Another blast from the past showing the construction progress on the south upper deck. It really doesn't look a whole lot different than the modern day process. 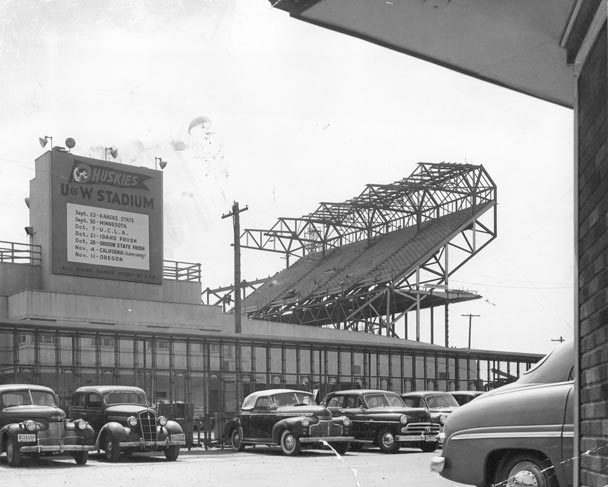 Picture #8 - Here is a picture of the north upper deck being built in 1987 and the infamous accident. Notice how they built one entire section, the steel deck support and the roof. From the other pictures I posted, you can see that in 1950 and 2012 they built multiple sections of the deck supports before starting on the roof. I'm guessing that was a major strategic mistake in 1987.

That's it for this week, keep watching those web cams, this is the best part of the whole process, things are changing very quickly!