In continuation of "ASJ Day", I bring to you: the tight end screen.

So by now the man-crush on Austin Seferian-Jenkins is no secret, but not without good reason. He's a weapon, and weapons only have value if you use them, so Steve Sarkisian has plays like this, where ASJ is the target and there's no second option.

The play starts with the quarterback, Keith Price, half-rolling to his right. This action does two things. The first is that it sells the pass, getting the defensive linemen to pursue into the backfield and the secondary to drop into pass defense. The second is that it pulls defenders to the right side of the field, leaving the screen side mostly vacated and giving the Huskies a numbers advantage.

As Price peels off, the offensive line sells pass momentarily before the left side players (Senio Kelemete and Colin Tanigawa) peel off to set up blocks in front of Seferian-Jenkins. The other tight end (Michael Hartvigson) looks like he's going to sell pass as well, but he's setting up his block on the middle linebacker while doing that, and by the time the pass is thrown he's in perfect position to take the backer out of the play.

Here we see the play exactly as it's supposed to be. Price has sucked the defensive line in, ASJ is waiting for the ball with two blockers waiting, and Hartvigson is blocking the lone Cal defender on the screen who could make a play. 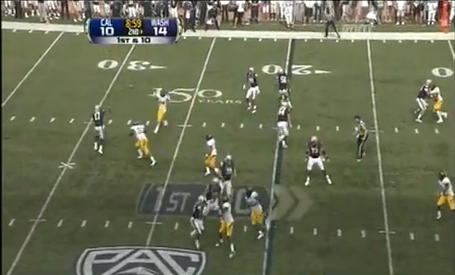 The impressive thing about this play is not so much the execution (very good) or the way it's drawn up (nothing spectacular) so much as it is what ASJ does once the ball is in his hands. He shows uncommon speed and agility from a tight end, and that he has both is truly special. Here, Kelemete gets enough of the defender that ASJ can put the brakes on, slide to his right and get right back on his horse into the endzone. 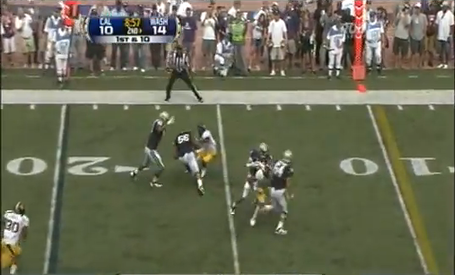 The lone criticism that I have of this play is Tanigawa. He gets into position well, but once he's out in space he overruns blocks and doesn't get his body on anybody, even though he has a couple of chances to. We saw a simlar error on the jailbreak screen. If these two plays (an admittedly small sample) are an indicator, that's certainly something that Tanigawa -- heading into just his sophomore season -- can improve upon.

Maybe the tight end screen won't be something we see every game, but it's definite that there will be more of a focus on plays like this, where the tight end is the first (and maybe only) choice to get the ball. And the personnel is such that the tight ends can turn nice plays into spectacular plays.