Hello, Dawg fan! You read that right, 40 weeks have passed since they broke ground on Husky Stadium! Just how long is that? I'm glad you asked! If your wife got pregnant the same day that they broke ground on the stadium, you'd probably have a new born baby within the last week or two. Yep, it's been 9 months and 12 days, or 286 days, of demolition and construction. ,

As all parents know, the real fun starts when the baby finally shows up. Funny thing, I expect the REAL fun to start this week. This past week the construction crews basically finished the Club Husky and Luxury Suite levels, they only have a few small things to finish up on the last section. Unless they need to wait for something, I expect they will start putting up the steel skeleton for the south upper deck this week. They have delivered and assembled all the steel for the 11 supports that will form the rows of the upper deck. They have also delivered and assembled 2 out of the 11 supports they will need for the roof over the south upper deck.

To start off this weeks update, I've updated the time lapse video of Web Cam #3 (looking down on the west end zone stand and FFB). The last time I posted this video was early June, which is over two months ago, and A LOT has happened in the last two months. Each frame is one day's progress, because I've already posted the first half of this, the first half goes by twice as fast and then slows down as the steel skeleton starts going up. Don't forget to click on the pictures below to see the full resolution images and keep a close eye on the Oxblue Web Cams. If I am right, the next 2-3 weeks are going to be the best of the entire process!

Picture #1 - The Club Husky and Luxury Suite levels are 99% complete, they just have to add the steel for the floor of the luxury suites on the far left section. I don't see any reason why they won't start putting up the upper deck supports this week. You might notice that they have left off a few supports on every other section of the lower upper deck, it seems they have done that so they can put large objects inside those areas, just like the two large white boxes (size of a container box) that the arrows are pointing at. 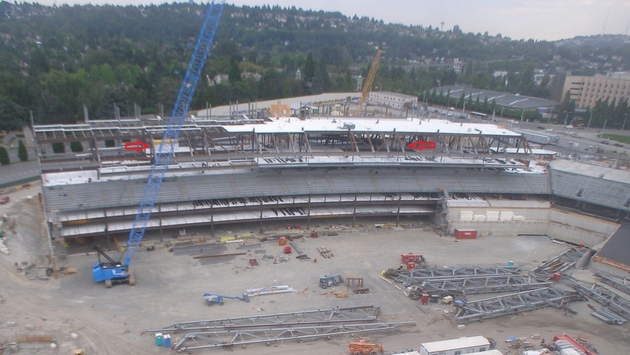 Picture #2 - Another picture that should look drastically different in next week's update! The red arrow is pointing at the south west entrance to the stadium, you can see where they have done the same sealing procedure that they did for the west endzone stands. I'm guessing they don't want any water leaking into the football facilities that are underneath those areas! The yellow arrow is pointing to some ducting that was delivered, presumably for the air conditioning system. The purple arrow is pointing to the western most luxury suite. Author's note: My four year old daughter was "helping" me write this post, she want to pick the color of the arrows, hence the multi-colored arrows. 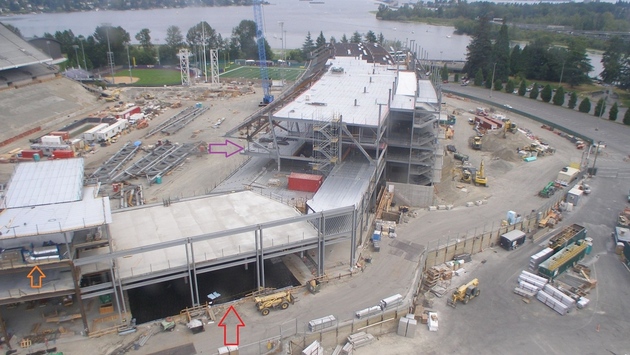 Picture #3 - The west endzone area hasn't changed much this week, but I have reason to believe that could change soon. The red arrow is pointing to the area of the roof that had been left open and is now mostly closed. I wouldn't be surprised if they leave a small opening to give maintenance personnel access to the roof. The black arrow is pointing to some stairs that were delivered this week. I'm betting they will be put on the upper concourse and be used to access the south upper deck. 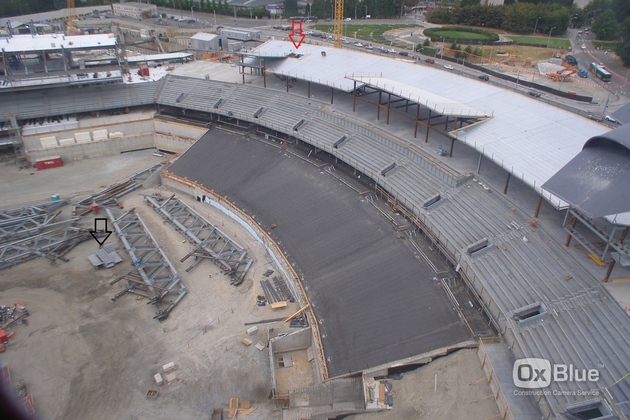 Picture #4 - I can't wait to see what this view looks like next week!! The south side is taking shape, but this week should really start showing the final shape of the stadium. The blue arrow is pointing to the eastern most luxury suite, the last area that needs to be completed before they start on the upper deck (should only take an hour or two). The black arrow is pointing to the white box mentioned in Picture #1. I'm not sure what it is, but I'm guessing it is materials that will be need to build the interior of Club Husky and the luxury suites. 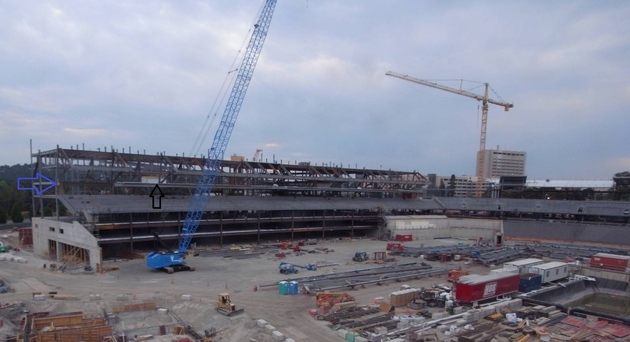 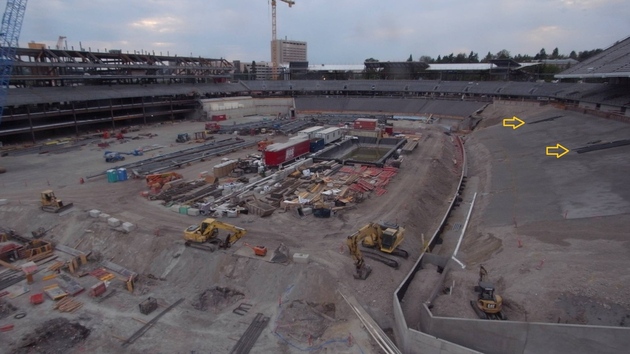 Picture #6 - The repainting of the north upper deck continues, but most of which is still pretty hard to see from the web cams. The brown arrow (middle, left side of the picture) is pointing at some forms that have been added to the west endzone area, that combined with the rebar sitting on the north lower bowl, makes me think the concrete work for the lower bowl is going to be coming sooner rather than later. The yellow arrow is pointing at a HUGE white pipe that will provide drainage for the lower bowl (see the picture below to get a better idea for the size of the pipe). Now that the moat/trench surrounding the stadium is gone, that has to be a way to get rid of large quantities of Seattle rain. 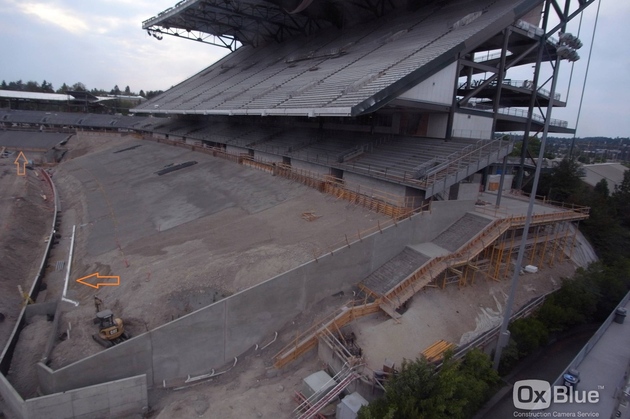 Bonus Picture - I'm guessing that pipe is at least 12" in diameter, if not 18''. Compare it to the size of the guys working on it, or the smaller grey pipes to the left of it. The small, vertical white pipes at the bottom of the picture will probably connect to a drain at the bottom of the stands. More vertical pipes have been installed since this picture was taken. 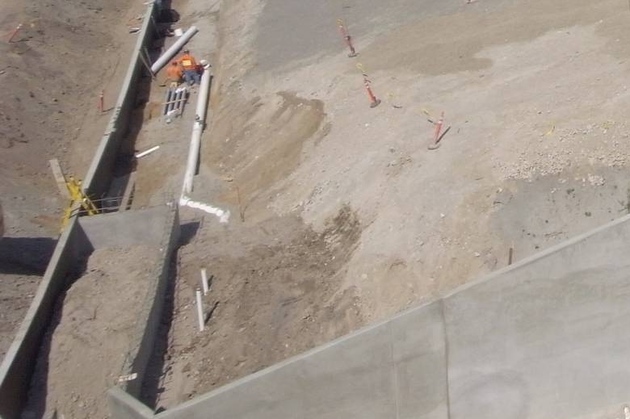 That's it for this week, Dawg fans. If this week goes how I think it will, next week's stadium update will be one for the ages! I can't wait to see that upper deck go into place!!