Share All sharing options for: the Gekko File: Pac 12 Forecasted

With the Oregon dossier now reviewed, we can now close the page on the Gekko File previews for the 2012 season. Since this series has been going on for a few months now, I thought I'd take a moment and revisit the forecasts, the rationale and the odds and ends that make up such a review.

In the PAC 12 South, the story this year is the USC Trojans and their fully loaded, if not deep, offense. The Trojans feature three legit Heisman candidates in the passing game, a solid one-two punch at RB (now that Silas Redd is added to the mix) and a defense that is robust in the back seven. They have a challenging schedule, they have a big question mark at LT and their DL is in a transitory state as they embark on their fall camp. Unlike many of the pundits, I do think USC will get challenged by both Utah and UCLA. These teams look very equivalent on paper and whomever wins their match-up in Rice-Eccles in October will have the inside track at challenging USC for the top of the Division. Although I hate their QB situation, Utah is well coached and has the makings of a strong D. They also avoid both Oregon and Stanford on the schedule. Advantage: Utah. Closing out the bottom half of the standings are the Arizona schools - both of which are clearly reloading and both of which are unknowns under new coaching staffs - and the Colorado Buffaloes who, by all accounts, are poised to go through a brutal learning curve in 2012 with their young team.

More on the Gekko File after the jump..

The Pac 12 North is clearly Oregon's to lose in 2012. They are fully stocked on defense, they have elite play-makers on offense and their coaching staff is fully intact. Of course, there is some intrigue with the new QB - particularly in regards to their decision making capabilities - but third down isn't something that the Ducks will face much of in 2012 and I expect that they'll run the table and challenge for a National Championship once again. The next three teams in the forecast - Cal, UW, Stanford - are all equivalent in terms of the balance in strengths and weaknesses. Of the three, I like Cal based on the potential of the Defensive Line and the fact that they have five home games - including big ones vs UW, vs Stan and vs Oregon - on their schedule. I expect UW to finish third thanks to a tie-breaking early season win over Stanford in Seattle with the Cardinal, who simply cannot replicate their amazing third-down and red-zone conversion stats from a year ago with so many new parts, finishing fourth. The Cougs and the Beavs will round out the North with a big edge going to the Cougs based on their air raid offense and the Leach factor. The Beavs have some pieces - a super fast receiving corps and a sneaky good d-line - but are in shambles in the running game and lack play-makers in the middle of the D. In the end, this will be a long slog for them and their season will end with Mike Riley. shamefully, on the hot seat.

The forecasted standings for the PAC 12 are noted below: 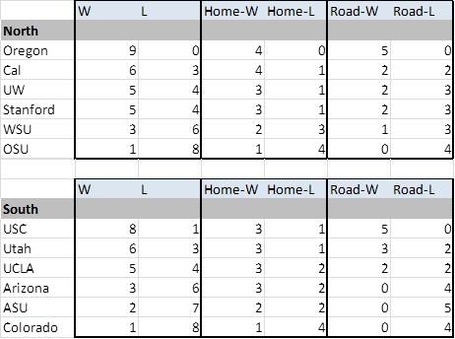 In the end, I see the PAC 12 producing eight bowl eligible teams and sending both Oregon and USC to BCS bowls. While I haven't yet thought hard about an Oregon / USC match-up in the PAC 12 championship, my strong lean is towards USC just simply because of how difficult it is to beat a good team twice in the same season.

I had some feedback from visitors and Dawgpounders alike that I was, perhaps, a little irrational in how I forecasted wins. I realize when you are seeing my predictions piecemeal by team once a week, it is hard to string everything together. However, I actually completed a matrix and predicted every game as I embarked on the previews. You can see that chart below.

The horizontal bar represents home teams while the vertical represents visitors. You can see where I picked the winners for each match-up. I mostly went with who I thought would be favored in each match-up when there was a clear pick and I tended towards home teams in "pick 'ems". For those where I picked what I deemed "upset picks", I highlighted those with yellow boxes. As you can see, I only picked four blatant upsets, and even one or two of those could be considered debatable - especially the Apple Cup result. 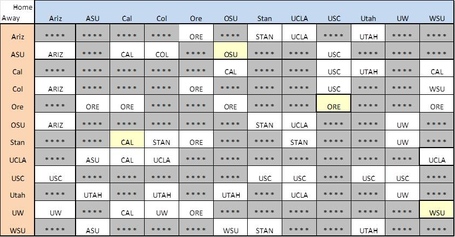 I hope you and all our visitors enjoyed the series. Obviously, you all come here for Husky chat, debate and insights. To have that, I believe that we need to continuously be setting the table with good conference context. The PAC 12 is a big domain with a lot of moving parts, intriguing coaches and outstanding talent. Look for more Gekko File content as the season goes on.