I had a rather hard time deciding whether or not to take the time to put together the weekly update. It's absolutely gorgeous outside, so I was lacking the motivation to spend time on my laptop, plus I know nobody will be reading it today seen as how you are all out enjoying this awesome summer weather. But then it dawned on me, all of you suckers with a desk job will be back in the office tomorrow morning, yearning for your stadium update. Lucky for you I have two small kids that need afternoon naps and my Norwegian heritage greatly limits the amount of time I can spend in the sun before I look like a tomato.

If you've ever remodeled your house, or done any type of remodeling, you know that the before and after pictures are priceless. They help remind you how much work you put into the project, but more importantly, how valuable that hard work was! Needless to say, this is going to be a before and after update. It's mind boggling to see just how much work has been accomplished in the last month. Which just gets me more excited to see how much progress they will make in the next month! As always, I want to give credit where credit is due, make sure you keep your eyes on the Husky Stadium web cams at http://oxblue.com/open/huskystadium. Don't forget to click on the pictures below to see the full resolution image. 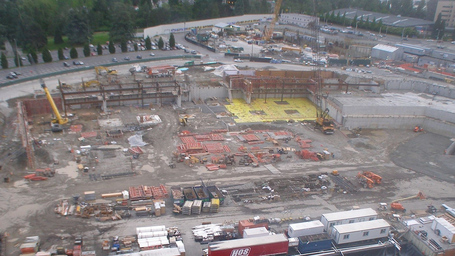 Web Cam #1 - July 7th (The After Picture): They are continually moving east with the steel structure. If you look close, you can now see the steel for the ramps on the south side of the stadium. 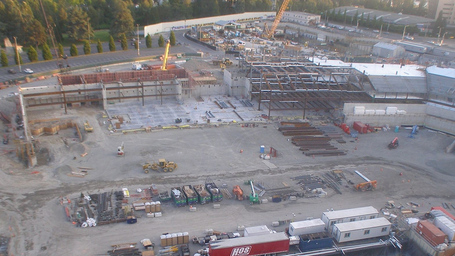 What's next: They need to finish the concrete floor, bringing it to the east wall and continue working on the loading dock area (just to the right of the east wall). Over the next week or two, I expect they'll finish putting up steel up to the current height, then the real fun begins as they start the upper deck. 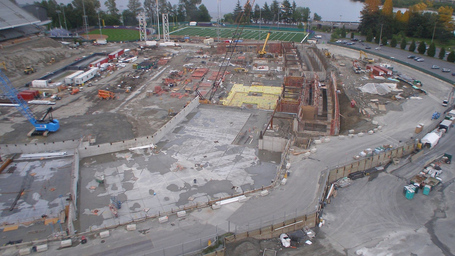 Web Cam #2 - July 7th (After): The best picture to see the ramps on the south side (right side of picture). I've added a few lines to the east wall to give you an idea of where the finished wall will end and meet the field. 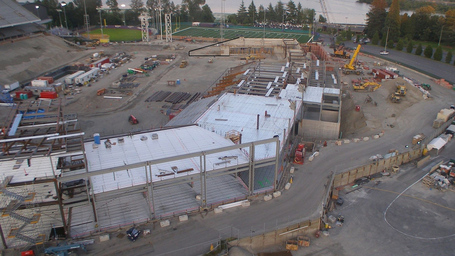 What's next: More steel, a few more weeks and the upper deck should start to be visible. They'll should also be pouring concrete on the event deck and the main concourse below it, but I'm not sure if that will be sooner or later in the overall process. 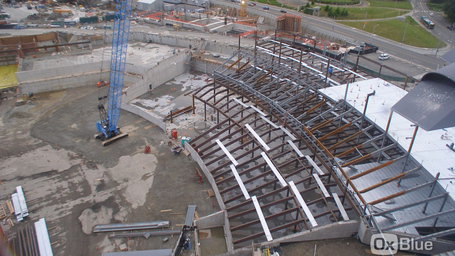 Web Cam #3 - July 7th (After) - It's really starting to look like a stadium! They are basically done with the skeleton, and the metal portion of the roof should be finished early this week. 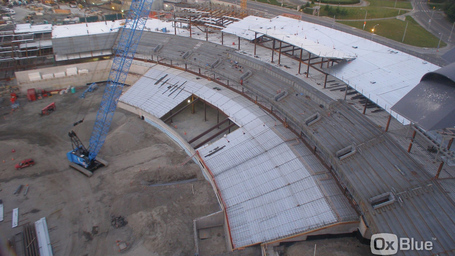 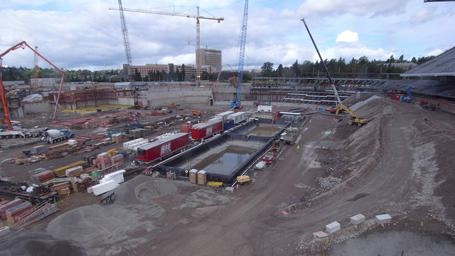 Web Cam Angle #2 - July 7th (After): Make sure you click on this, the full resolution image really helps to show what the final product will look like, especially now that the majority of the roof is on the Football Facilities Building. 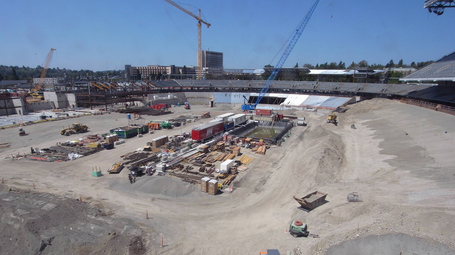 What's next: They'll continue grading the ground on the right side of the picture (north lower deck), eventually they'll start laying rebar, place the forms, and pour the concrete for the lower bowl. As mentioned above, they've already started that process on the metal section that forms the west endzone lower deck. In mid to late July they should start building the exterior skin of the Football Facilities Building.

That's it for this week, keep an eye on the web cams, things are happening fast! The next few weeks should be the most exciting of the entire process!