Hello, Dawg fans! Another week has past and it's time for another Husky Stadium update. The visual stimulation has not been quite as noticeable, but they're still hard at work getting stuff done. Speaking of visual stimulation, this week saw the first delivery of steel for the future upper deck of the south stands. I'm guessing it will still be a few more weeks before the upper deck starts getting built, but I'll explain that later with the pictures.

If you are like me, you can't get enough pictures of the construction process. Two sites I highly recommend keeping an eye on are http://coachsark.com/blog/ and http://www.whosay.com/huskystadium, both post pictures from the construction site on a semi regular basis. Below is the usual collection of pictures with comments on the recent activity. Be sure to click on the pictures to see the full resolution image and keep an eye on the web cams yourself at http://oxblue.com/open/huskystadium.

Picture #1 - The steel skeleton is moving further east, by mid week they should have all the steel in place for the first three levels of the stadium (first floor - medical facility and visiting locker rooms, second floor - parking garage, third floor - main concourse). The exciting development is highlighted in the red box, those are the main supports for the upper deck (see picture #2). From what I can figure, they still have some work to do before they can put those in place, but their very presence on the site is a sign that it should be sooner than later. 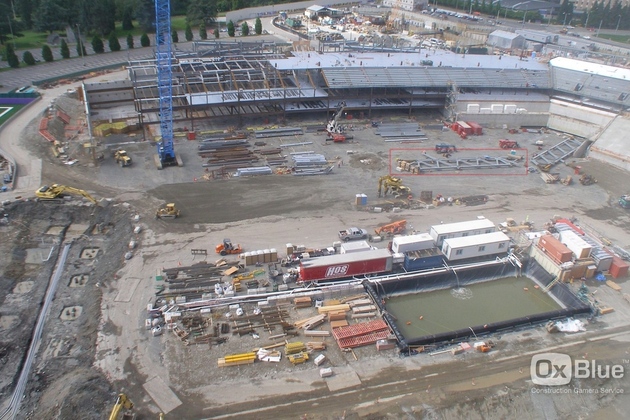 Picture #2 - Here is a side view of the south upper deck from the Husky Stadium Virtual Venue feature at www.huskystadium.com. The red arrow points at the metal support that you saw in the first picture. If I am correct, they won't be able to put those in place until they put another layer of the steel structure in place, on top of the current structure. I've highlight that layer in the yellow box, which is Club Husky and then the luxury suites. 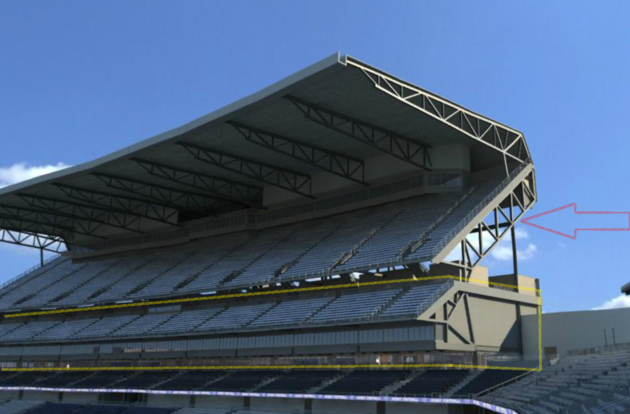 Picture #3 - It's getting harder to see everything they are doing, Gekko has his dots, I have my arrows! At the bottom left of the picture, the red arrow is pointing at the main concourse, they have put in the rebar and should be pouring the concrete floor in that section pretty early this week. The red arrow in the center of the picture is pointing to the stair case they just installed, in case you don't like ramps. The arrow on top is pointing to the second set of ramps that will service the east side of the south upper deck. 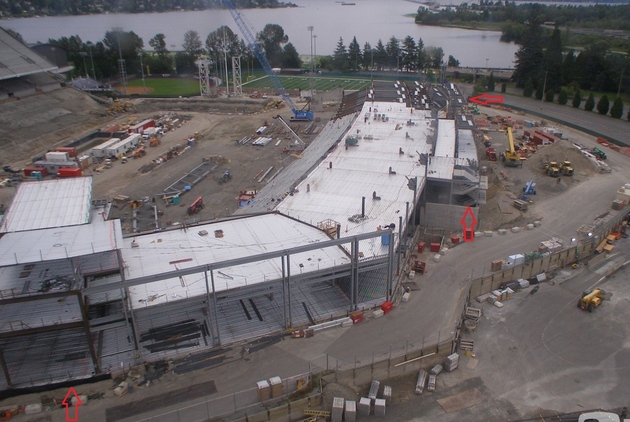 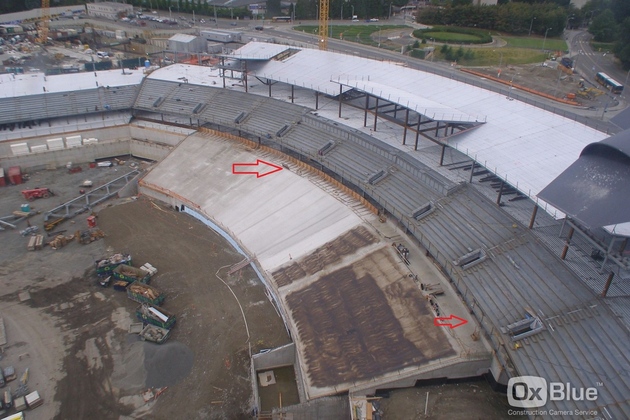 Picture #5 - They are busy preparing the area for the east stands, you can see the concrete pillars that they put in about a month ago. It looks like they are knocking off the concrete, so they can tie the rebar in the foundations to the rebar in the pillars and use them to anchor the structure. 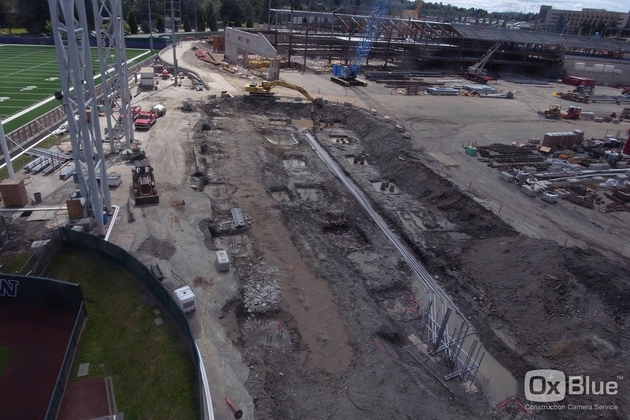 Picture #6 - Here is the design schematic for the east stands (it's 18 months old, might have minor changes), it should help give you an idea of what's to come in that area. The yellow area is storage space, the green is the restrooms and the blue is the concession stands. 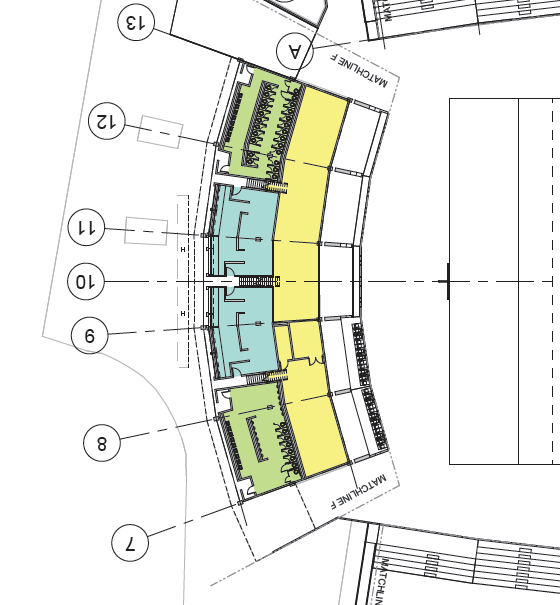 Picture #7 - The ground for the north lower deck has been mostly graded and now you can see where they have dug down to build the front concrete wall of the lower deck. Remember, the field will be four and a half feet lower, the ditch should give you a good idea of how far they will be digging down and how much more dirt they'll need to move off the field area. 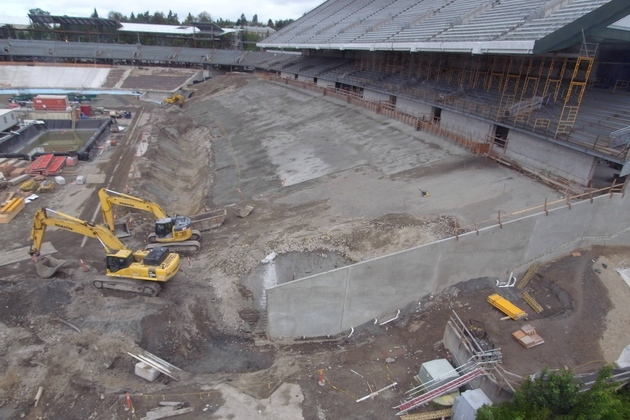 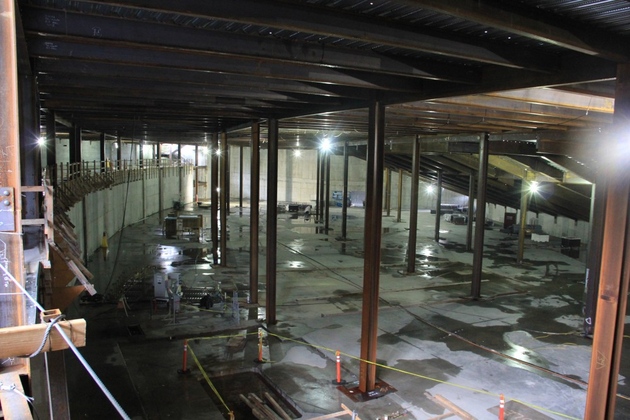 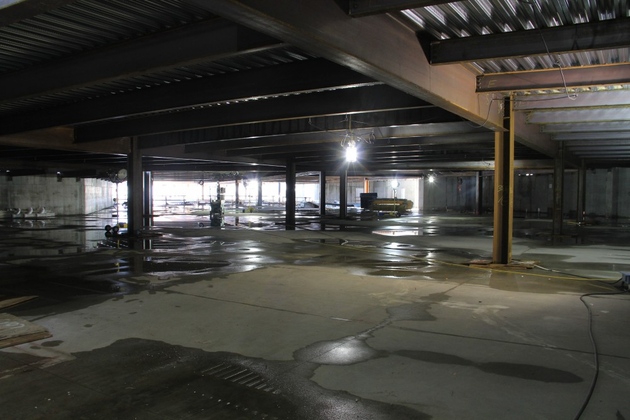 That's it for this week, keep your eyes on the web cams, the really fun part (the construction of the south upper deck) should be coming up in the near future. GO DAWGS!!!