As all of you know, the Apple Cup will be settled in Pullman this year. Most of you will not be making the trip to Pullman for one of the following reasons:

Nevertheless, according to the Gekko File, there is a minority contingent among you who will make the trip. You are somewhat easy to identify among the western Washington crowd: you are young, you are employed in a menial, hourly job (if at all), you have some connection to Eastern Washington, and you are most likely single and most assuredly looking for a hookup. If you fall into this category, I'm sorry to inform you that you are bound for disappointment. While Pullman may very well still hold some of the things that you are looking to observe for yourself ... Black Friday sales on ammo and spittoons, denture discount day at the "dentist", Midget Mud Wrasslin' night at the Coug, and, assuredly, a clown-stomping of the Cougs by the Dawgs at the Apple Cup... it cannot offer the one thing most of you desperate lot are seeking. Though it has been kept under wraps, I have photographic evidence that "Miss WSU" (aka "the Cougar Cougar", aka "Mike Price's Muse", aka "the Moose of the Palouse"), the hottest girl in the town of Pullman, is officially off of the market. As you will see in the photograph on the other side of the Jump, Miss WSU has been married to, presumably, one of Pullman's finest young men. If you are one of these few UW fans considering the Pullman trek this year, please do so with full knowledge that you will likely score, but not with Miss WSU. My photographic evidence and the Gekko File on this year's projected #5 finisher in the North after the Jump. 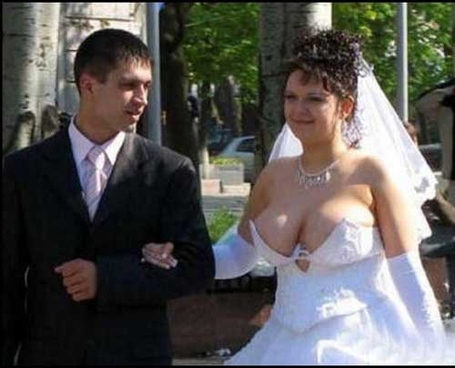 As UW fans, we all know the plight of the Cougs. Outside the unusually strong or weak year every so often, the cadence is typically the same. The Cougs open up against inferior competition and show some flashes of offensive prowess. The fanbase gets geeked up and starts dreaming about knocking off USC and seizing the Apple Cup. The PAC schedule kicks off and reality sets in. The Cougs get physically challenged, lose a few key pieces to injury, have their inevitable lack of depth exposed, Coug a game here or there, get a player or two kicked off the team, and then get thrashed in the Apple Cup which is almost always their last game of the season.

So the story went in 2011. The Cougs started out 2-0 with very big wins against the likes of Idaho State and UNLV. Coug nation was ecstatic. The Paul Wulff experiment was finally working. All that "youth" was finally maturing and big numbers were getting posted. Although the first hiccup had already occurred when Jeff Tuel suffered a broken collarbone, the Cougs had shown that they could win with Marshall Lobbestael at the helm. However, the initial trip-up came a little sooner than usual when San Diego St stunned an upbeat Cougar team 42-24. The loss was a big blow to Coug Fans who were counting on that game to be a win in order for their "Bowl Eligibility Formula" to work out. Having to score four PAC 12 victories in a schedule that only afforded four home games was a daunting task that, unfortunately, would not get executed. The Cougs would score only victories over Colorado (a thrilling game) and Arizona St (they did give Oregon a bit of a scare along the way) on their way to a 2-win PAC 12 campaign.

Not everything was bad. The Passing Offense was a strength - finishing ninth in the nation at over 320 yards per game. Marquess Wilson broke out in a big way and finished, in my opinion, as the highest performing receiver in the PAC. He led the conference in receiving yards, finished second in TD receptions and third in total receptions. Lobster also had a good run as a starter in place of an injured Jeff Tuel. While not in the upper echelon of the PAC QBs, it is hard to argue that he wasn't at least as good as Brock Osweiler and certainly better than the likes of Kevin Prince, Zach Maynard, Sean Mannion and Tyler Hansen. Travis Long, as an undersized DE, demonstrated his motor and versatility in racking up 43 tackles and 4 sacks while the DB tandem of Damonte Horton and Deone Bucannon flashed some potential with a combined 7 INTs and 14 passes defended (contrasted to Desmond Trufant who had 2 INTs and 30 passes defended). Collectively, though, it did not work for WSU as a team. They finished seventh in scoring offense but 10th in rushing offense and dead last in yards/rushing attempt. The O-Line was a particular problem, surrendering almost 3.5 sacks a game and finishing 116th in the nation in that regard. On D, they finished 10th in scoring defense and finished the season with just 17 sacks as a team. While they showed some capabilities to stop the run, they gave up a lot of big plays (including 8 plays of 50+ yards ... only UW was worse with 10). Coupled with a relatively weak TO margin, and you can see why average to slightly less than average performances by the D and rushing O were not enough to deliver bowl eligibility for the first time since 2006.

Of course, you know the rest of the story. Bill Moos executed his secret plot to relieve Paul Wulff of his job duties and to bring Mike Leach up to the Palouse. Wulff would exit in a very uncivilized manner and, of course, some knuckleheads (e.g. CJ Mizell) would join him on the way out the door.

The Cougars traveled to Seattle to compete for the Apple Cup last season. While the game had some interesting moments throughout, it never felt like a game in which the Huskies ever lost momentum. The game turned early in the first quarter when, after both teams exchanged three and outs, Jesse Callier recovered a Cougar punt blocked by Thomas Tutogi for a TD. Although the game would get tied late in the second quarter, the Huskies would never trail.

There were definitely some highlights in this one. On the Coug side, Marshall Lobbestael had a pretty decent game throwing for 344 yards, 3 TDs and a pick against a porous UW pass defense. Marquess Wilson showed his big play capabilities going for 108 yards receiving and 2 TDs. That was really about it for the Cougs, who would end up gaining only 38 yards on the ground and who would register zero sacks in the game. For the Huskies, Keith Price (who had missed most of the OSU game the week before) used the Apple Cup to set the single season UW record for TD passes when he connected with Chris Polk for a TD in the third quarter for his 29th TD pass of the season. Polk registered 108 yards on 22 carries and added another TD in the fourth quarter. Other performances of note included those of Alameda Ta'amu, Kasen Williams, Princeton Fuiamaono and Austin Sefarian-Jenkins.

The game was the proverbial nail in the coffin for Cougar coach, Paul Wulff, whose team came out of this one looking like a deflated and uninspired bunch. While it wasn't a certainty as far as the public was concerned, the defeat at the Apple Cup was all the cover fire that Bill Moos required to can Wullff and to hire the candidate that he had been targeting for several weeks in Mike Leach.

WSU fans have a lot of reasons to be excited about their prospects for bowl-eligibility in 2012. Mike Leach infuses a great deal of confidence in the fanbase given the track record he established with Texas Tech, in particular. He arrives with a lot pieces to work with on the offensive side of the ball. Jeff Tuel is a legit, top-quartile QB when healthy. He is backed up by a rising star on Connor Halliday. The skill positions seem to be well stocked with Wilson and returning rushers Ricky Galvin and Carl Winston. In addition, Marcus Mason looks like a player about ready to crack into the tailback rotation. Defensively, the Cougs return some key pieces in Long, Horton and Bucannon. New DC Mike Breske will be implementing a 3-4 base this season which means that Long shifts to OLB and leaves some question marks with the remaining front three. In particular, questions loom as to who starts in the middle - Anthony Laurenzi, Toni Pole of JC transfer Ioane Gauta - and whether or not they'll have to rely on RS Freshman Xavier Cooper to hold down one of the end positions. Linebacker is also an interesting position where the rising Chester S'ua and the diminutive Eric Oertel (is he really just 200 lbs?) try to join Long in filling the shoes of Alex Hoffman-Ellis.

I really didn't want to forecast the Cougs in fifth place in the PAC this season. The returning talent they have on offense, particularly in the passing game, is top notch. There are a few pieces on D to help slow pass-oriented opponents. They have Mike Leach and, let's face it, he's worth one or two wins by himself. There are legitimate reasons to pick this team ahead of Cal and, possibly, at par with UW.

However, what we don't know about WSU is what makes picking them any higher than fifth difficult. Question 1 - can that porous O-Line improve year over year? There are a lot of patchwork pieces there and their best player, C Matt Goetz, has struggled with health. Question 2 - do they have the size and depth on the Defensive front seven to hang for 12 games? This is a small defense by PAC 12 standards. Question 3 - can they actually establish a run game? Sure, Leach's air raid will help their passing game, but their passing game was already clicking at an elite level last year and it only won them two games in the PAC. They need rushers to emerge to help balance the attack and limit their QBs exposure.

The biggest factor in my forecast, however, is the schedule. The Cougs will play only four PAC games in Pullman this year and only five overall. Two road OOC games (BYU and UNLV) and one "home" game in Seattle versus Oregon is a big downer for an up and coming team. It makes it hard to come up with six wins much less enough wins to eclipse Cal, UW or Stanford in the standings. As I scan the schedule, I can see one certain victory over EWU and another @UNLV. The best shots at their remaining four required victories will come out of the pool of vs Col, @ASU, vs UW, vs UCLA and @OSU. This means that they are going to have to take care of all their business at home as well as score a road win against either ASU or OSU. The Cougs miss USC and Arizona this year - probably a wash. Upsetting BYU in Week 1 could make all bets off, but even running the table at home - in particular the Apple Cup and the UCLA game - are simply not gimmes given the talent matchups.

I don't see it happening. Even though I think Leach is a huge upgrade over Wulff and that this team is eminently more dangerous than last season, the combination of lack of depth, less-than-ideal health, and unfortunate schedule make this one more season in which the Cougs finish with four maybe five wins and miss bowl eligibility. I do expect to see a few near misses and maybe, just maybe, a lack of any game in which WSU Coug's it outright as the Cougs build momentum in their ongoing campaign to become relevant on the national scene once again.