Husky Stadium Update - The Up Close and Personal Edition

Share All sharing options for: Husky Stadium Update - The Up Close and Personal Edition 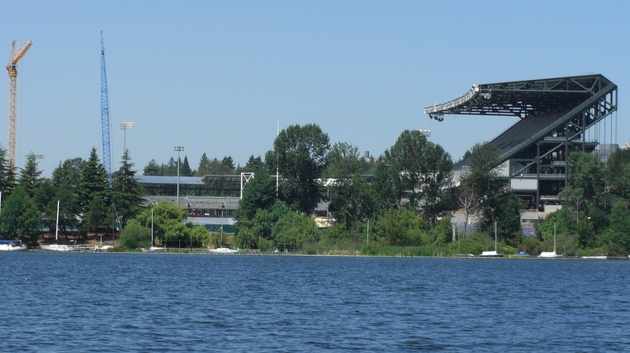 Hello, Dawg fans! First, I want to start by showing you just how dedicated I am to the Dawg Pound. This past Thursday I went out and rented a boat for the sole purpose of getting you a current water front view of Husky Stadium. Okay, I went out with my parents on their boat, but I was smart enough to pack the camera! Needless to say, the picture above was taken by yours truly, while enjoying a BEAUTIFUL day on Lake Washington (click on the picture to see the full resolution image).

It's been another week of lightning fast progress at Husky Stadium, not to mention some good old fashion thunder and lightning. After spending most of Friday morning dodging thunderstorms in Eastern Washington, I returned to Seattle to dodge yet another thunderstorm sitting over the greater Seattle area. When I finally got a chance to check on the web cams, I noticed that the blue crane hadn't done much of anything on Friday. I'm guessing they didn't want anybody sitting in a rather large lightning rod all day!

This week's update is going to be a combination of a few web cam pictures and some up close and personal pictures of the construction process. A few months ago, you could find some great, on site, pictures of the stadium construction at www.huskystadium.com. Unfortunately, they hadn't added any in quite awhile. Just this week, I stumbled upon those same pictures, it looks like they are now being posting on www.whosay.com. Thanks to "huskystadium" at whosay.com for allowing us to embed their pictures and get a real up close up of the construction process. When you click on the whosay.com pictures, it will take you to their website, where you'll find many, many more construction pictures.

Picture #1 - For all of you who are dying to know who "Lear Pilot" is, and what I look like, this picture is for you! Here is a picture from Husky Stadium Web Cam #2, the yellow arrow is point at us taking pictures of the stadium while going around a tug boat (which was pushing a small barge) that was in our way. 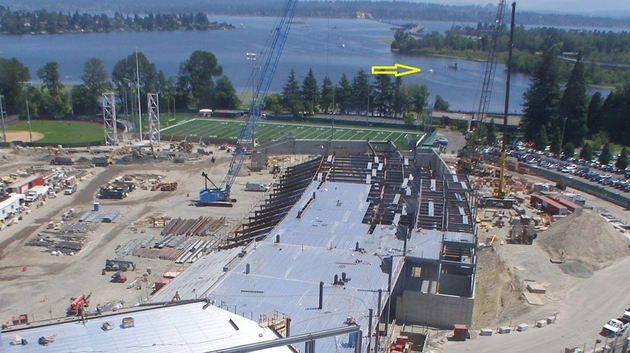 Picture #2 - They have graded most of the ground for the north side of the lower bowl. Just above that, you can see they have started to build the walls between the lower deck and the middle deck. Those walls will be part of the restrooms on the main concourse that you and I use the on August 31st, 2013. 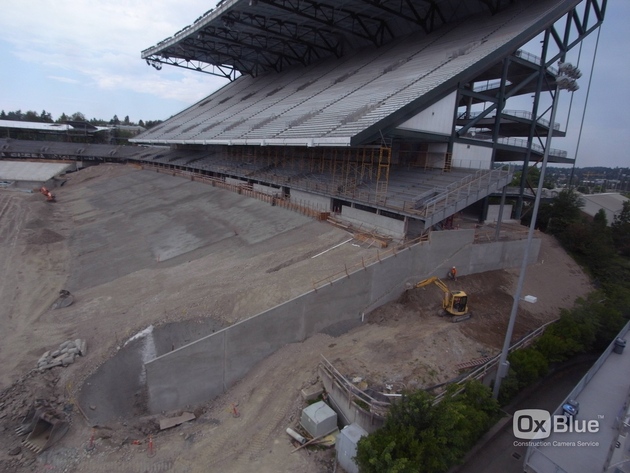 Picture #3 - The west endzone section is coming along quickly. This week they closed up the opening in the middle of it and poured concrete over a third of the area. I was expecting them to form each row of seats with the concrete, but after taking a look at Cal's stadium web cams, I'm wondering if they will put metal bleachers (just like the middle deck above) on top of the concrete slab. Time will tell. 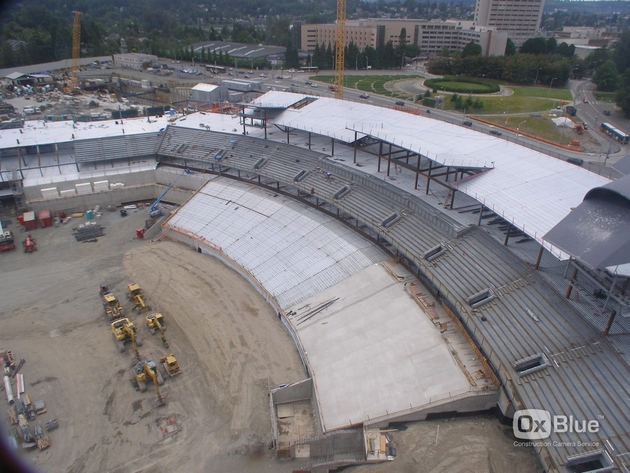 Picture #4 - Workers hanging speakers from the North upper deck. Aren't you glad you don't have this job!

Picture #5 - This is the staircase that goes from the weight room (bottom floor), all the way up to the football offices on the top floor. The empty space on the left side of the staircase will eventually be the elevators to service the same area. Late for a team meeting? No elevator privileges for a year!

Picture #6 - The view of the main concourse under the North upper deck. For most all of you who have been to Husky Stadium, this should look much different than the last time you were there!

Picture #7 - The view from the Montlake side of the Football Facilities Building. There are three floors in view, the ground level floor will be the main concourse. The second level (in this picture) will be the football offices, conference rooms, film rooms, and recruiting areas. The third level, which is only a small section (there is a similar one on the opposite end of the FFB) is not depicted on the designs that I have access to. My best guess is that they saw how much room was available (thanks to the angle roof) and decided to add the extra level in order to facilitate more office space.

Picture #8 - A construction worker welding a gusset plate. I included this picture to help give a sense of scale that you just can't get from the web cams. I find it amazing how big some of those steel beams are!