Playcalling is a tricky thing sometimes. Sometimes you have first down or second and short where the world is your oyster, and you can call whatever you want with little worry. But when you're backed up third and long, or your first down play falls flat and you've got second and ten or more, things get sticky.

When the defense is expecting one thing, a playcaller can get overly cute by going the opposite direction. No, you don't want to play right into their hands by throwing the ball when the defense drops seven or eight men into coverage. Worse, you don't want to expose your quarterback on a deep drop with blitzers coming at him, ears pinned back (especially when your QB has been injured all year as Keith Price had in 2011). But you also can't just run the ball and essentially concede the drive.

So to get the best of both worlds, Steve Sarkisian went to the Lead Draw in these situations.

The play is set up by the Quarterback, Keith Price, taking a drop with his eyes downfield to have the secondary backpedal into their pass defense.

The Runningback, Chris Polk, steps to the side and waits for Price to come to him, and after a beat or two moves forward to accept the handoff

The Left Tackle gets a chip on the defender over him to slow him down enough that he can't make the play by sprinting untouched, but once Polk gets the handoff headed the other way the defender cannot switch direction quickly enough to make a play. By only chipping the defender the LT is able to essentially block two men, moving to level two and taking care of a Linebacker after the Defensive End.

The Fullback position didn't provide a lot of measurable production on the season, but on these plays the lead blocking was fantastic, taking out a linebacker and allowing Polk to cut off of the block to turn solid gains into game breakers. 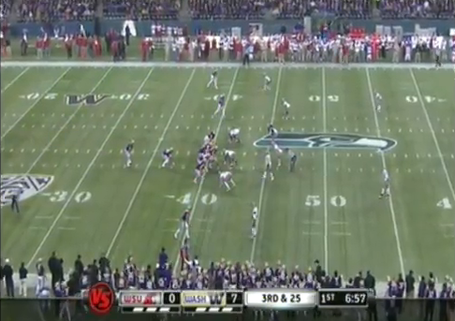 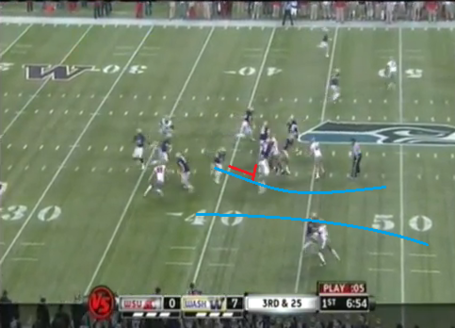 Great blocking opens up a huge hole, and Polk is able to pick up a first down on 3rd and 25. 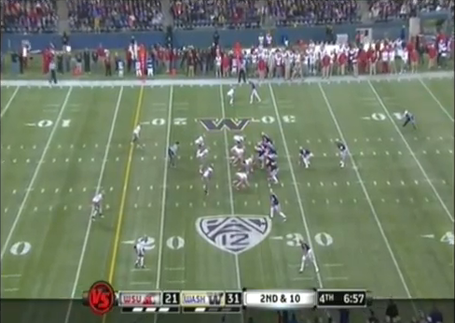 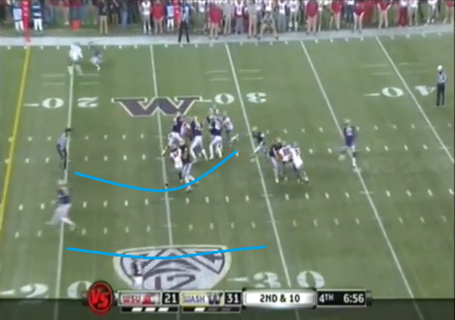 Again, great blocking turns 2nd and 10 into a 1st down. 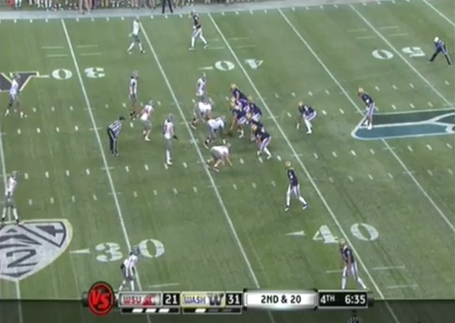 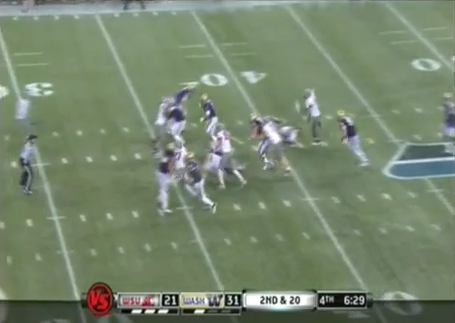 The blocking here is not spectacular, but Polk makes a couple of defenders miss, beats one with speed and nearly turns a 2nd and 20 into six points.

The repetition here shows Sark's willingness to keep pounding a team over and over if they show the inability to stop a play, but to get to that point you have to first draw up a good play and have the personnel to execute it.

Of course, it'd be nice if the team didn't put itself in bad situations so often. Chris Polk may have been able to gash WSU time and again, but he's gone and the defenses of LSU, USC and Oregon aren't so forgiving.