We are another week closer to the grand opening of Husky Stadium!! Unfortunately, that is still over a year away, but we are getting very close to the peak of the construction storm. The construction crews have finished putting up the steel skeleton that will become the Football Facilities Building (FFB) and the west endzone stands (well, except for four steel beams that will go in place within a week or two). Late this past week they started building the steel skeleton that will become the south stands. The real fun starts when they start building the south upper deck and overhang, then she'll really start looking like her future self!

Below is the usual assortment of pictures and description of the on going construction activities. Be sure to check out the virtual venue at www.huskystadium.com to get a very in depth idea of what the finished product will look like. Don't miss the day to day activity that can be seen on the web cams at http://oxblue.com/open/huskystadium.

To start off our update, I put together another time lapse video, this time featuring the progress as seen from Web Cam #1. It is quite remarkable to see how much has been accomplished in just six months! 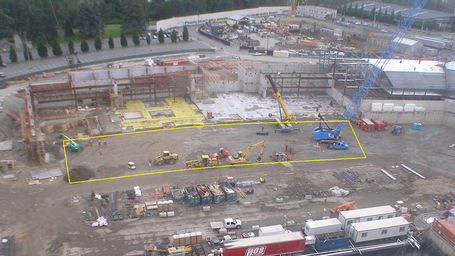 Picture #2 - Same view as the picture above, just from a much lower vantage point. It won't be long before this picture changes drastically. This is where the majority of the action will be for the next few weeks. It won't be much longer before the stadium really starts to take shape. It might even be worth paying the toll on 520 just to see the new upper deck rising above the landscape! 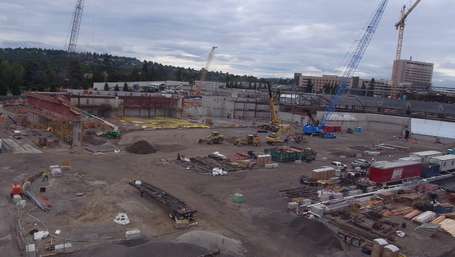 Picture #3 - The FFB and west end stands. They finished putting up the steel for the roof of the FFB this week, which basically completes that part of the steel skeleton. You'll notice that they just put up gang forms in the incomplete section in the middle of the picture. I expect they'll finish that portion of the wall this coming week, then put the last 4 steel beams into place, closing up the structure of the FFB for good. 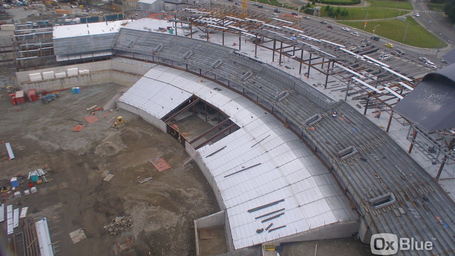 Picture #4 - The view of the west endzone stands and the FFB from the east endzone. If you look closely at the two ends of the building on top of the stands, you'll see two raised sections of the roof. The going theory is that these will be video scoreboards. 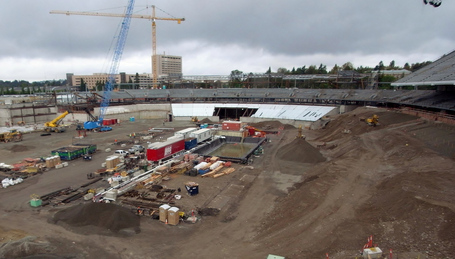 Picture #5 - The construction crews have been building the concrete wall that will be the eastern most edge of the stadium. You can also see that they have begun grading the ground for the north lower deck. It seems to be a rather detailed and in depth process. I can't wait to see them start pouring concrete for the lower bowl, but that is probably still a ways off. 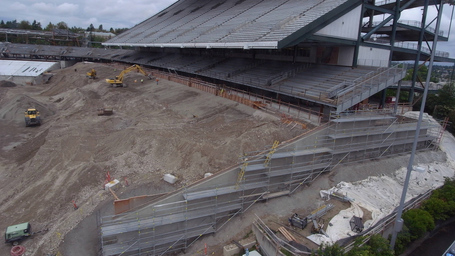 That wraps it up for this week, the next few weeks could be the most visually stimulating of the entire construction process. That being said, with the July 4th holiday this week, there might not be enough changes to warrant an update next week, but time will tell.

I can't wait to see all of those awesome new recruits playing in the best stadium in the country! GO DAWGS!!!