The smash concept is one that is in every coach's playbook. It's a simple play that is easy to run and an easy read for a quarterback to make.

The play is straightforward: the outside receivers run hitches at about five yards, and the slots run corners over the top.

Against a Cover 3, the quarteback will typically have a somewhat easy throw to either wideout running the hitch, as the corners play a deep third and will be keeping everything in front of them. If a defense "rolls" its coverage (meaning that a safety takes a third over a corner, and that corner plays tight) the quarterback has to find the side they're rolling away from to hit the hitch.

Against a Cover 2 the hitches will not be there. The cornerbacks will be playing tight, and a throw in that area would be certain disaster. But the corner routes have some big play potential, going over the top of the tight playing defenders. If the safeties do not get outside any decent quarterback will be able to pick the defense apart with mid to big yardage completions.

But if the safeties are jumping the corner routes, what does the offense do? Here is Steve Sarkisian's solution: 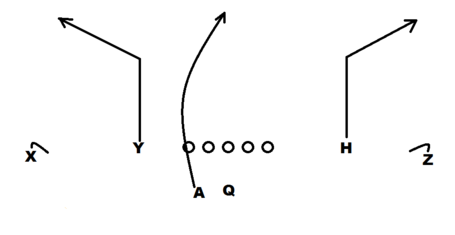 (Continued after the jump)

Sark has his runningback, Chris Polk, run a go route from the backfield. It becomes simple arithmetic at this point: with two deep defenders, and three offensive players going deep, somebody is going to be open.

His wideouts don't run the hitch at 5 yards, they take a step upfield and turn back to the QB to keep the corners even that much closer to the line of scrimmage. This gives Keith Price a bigger window to make the throw to the corner, should it be there. 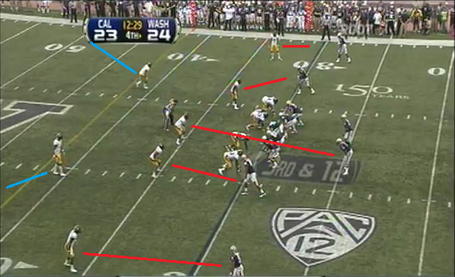 Cal is in a straightforward man defense, with two deep safeties. The safeties play wide, effectively doubling the slot receivers and leaving the middle of the field open. In fact, once the slot WR's get far enough upfield, the linebackers pass them off to the safeties, leaving Cal in bad shape to defend Polk. Polk has to beat his defender one on one, and for a RB with his background and skill as a route runner, it's just not fair to the linebacker. 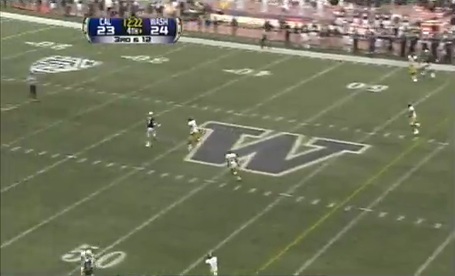 Polk runs right by the defender and all that Keith Price has to do is throw the ball to the open field, which he does. Touchdown Huskies.

Plays happening like this are no accident. Watching Cal's tendencies and knowing how they defend the smash concept leads the addition of the streak from the RB. It's a reasonable guess to assume that they'd seen this defense in film study the week before the game, put this play in knowing that it could defeat the coverage, saw Cal using the coverage during the game, and then Sark picked a time when he thought they'd be in it.

Many football games are won before the teams step foot onto the field, and plays like this are the reason why. Coaches spend so much time watching film so that they can put together just one play like this that will give their team a leg up. Good preparation and playcalling by coach Sark gave UW the go-ahead touchdown en route to UW's third straight victory over Cal.