Husky Stadium Update - What a difference a week makes!

Share All sharing options for: Husky Stadium Update - What a difference a week makes!

Here's a quick lesson on thunderstorms, they have three stages, cumulus, mature, and dissipating. During the cumulus stage the storm is building. During the mature stage you get thunder, lightning, rain, hail, all sorts of fun. Then during the dissipating stage everything starts to die down. To follow with my storm analogy from previous updates, the storm has definitely arrived, we are clearly in the cumulus stage as things are building rather quickly! I expect to hit the mature stage of the storm in July and August while they are building the steel structure for the south stands. Below is the usual assortment of pictures courtesy of the Husky Stadium Webcams, which you can find at http://oxblue.com/open/huskystadium. Don't forget to click on the pictures for a full resolution image.

Picture #1 - It was a shortened work week after the holiday on Monday. Tuesday, ten semi truck loads of steel were delivered to the Football Facilities Building (FFB), followed by even more steel being delivered on Wednesday and Thursday mornings. This is the construction site as of 10 am on Thursday morning, with tons of steel (corny pun intended) on the floor and very little in place: 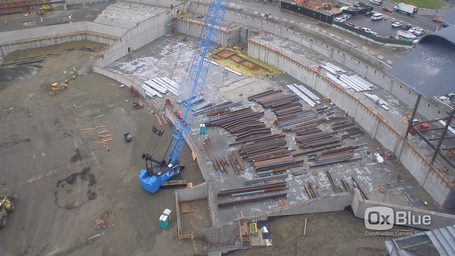 Picture #2 - This is the same view as of Saturday evening. Notice there is ZERO steel left on the floor and it is all in place. I would estimate that one third of the FFB's steel structure is already in place. At this pace, it is quite possible that the entire steel skeleton of the FFB could be in place by the end of next week. Seen as how they are suppose to start on the steel skeleton of the south stands on June 15th (give or take), I would expect them to follow the same general pattern they've used throughout the construction process, starting at the northwest corner of the stadium and continually working their way around the west endzone, then east along the south side of the stadium towards the lake. 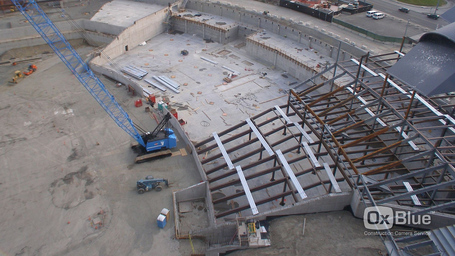 Picture #3 - The same structure view from one of the new web cams located just past the east endzone. If you have good eyes, and look close enough, you'll see the steel sticking up above the future second deck, that is going to be the coaching and recruiting offices. 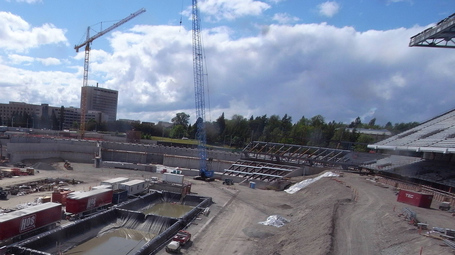 Picture #4 - The view from webcam #2, half of the concrete floor for the parking garage section has been poured. The other half is starting to get rebar and should be poured this next week. Further in the picture you'll see that they've already started spreading gravel, a sign that they are basically done in that area, the only thing left is the concrete floor, followed by the steel skeleton that will make up the south stands. 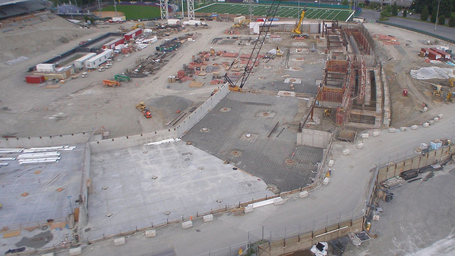 Picture #5 - The view of the south stands foundations from webcam #1. In approximately two weeks the fun starts here as the begin to put up the steel skeleton for the south stands. You can see where they've reached the east end of the stadium, as they start preparing to build the east wall on the left side of the picture. 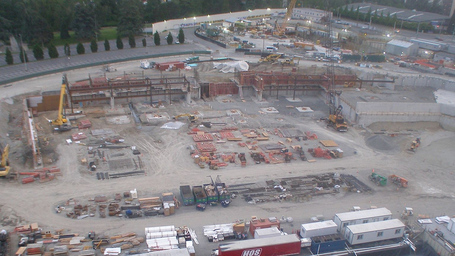 Picture #6 - The same area as the picture above, but from the lower webcam. You can start to see where there will be large openings on the east wall (left side of picture), those openings will become the loading dock for the new stadium. 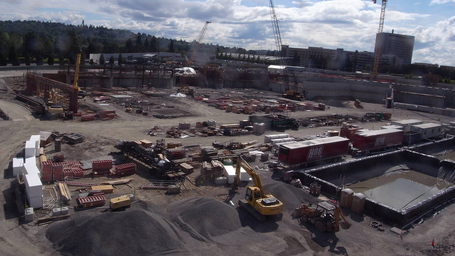 That's it for this week, expect to hear from me again next week as the construction teams keep moving at an incredible rate! More than likely, I'll be trying to get a stadium update out every Sunday throughout the summer, or until the visual progress starts to slow down.