Can you believe it's been a little over six month since they broke ground on Husky Stadium? I find it remarkable that in six months they have torn down the old stadium, excavated mammoth amounts of dirt, built foundations and the new stadium is already starting to take shape. It is a GREAT time to be a Husky fan!!

Below is the usual series of pictures, including some of my patented design schematic overlays to help give you a better picture of the future Husky Stadium. Be sure to check out the web cams for yourself at http://oxblue.com/open/huskystadium. There is a lot of progress going on everyday, if you aren't checking them regularly, you are missing out! As always, don't forget to click on the pictures for a full resolution image (it makes it much easier to see the finer details).

Picture #1 - Web cam #3: The Football Facilities Building (FFB) and West Endzone stands. It's starting to look like a stadium, isn't it! This week they started putting up the roof for the FFB and have put in place most of the corrugated metal that will support the concrete floor of the lower deck and the football offices. 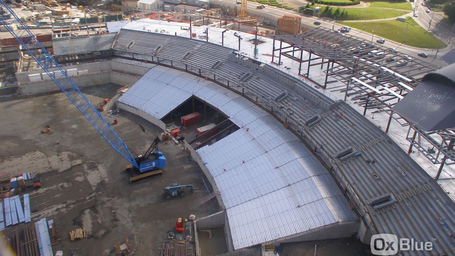 Picture #2 - Same picture as #1 with lines added to help simulate areas from the design schematics released in January of 2011. The purple line represents the big purple line that went around the track last season showing where the edges of the new stadium will be. The white lines show where the lower stands will extend down to just above field level. The purple lines at the top of the structure outline the football offices, the red area is the southwest event deck, and the yellow area will be the concourse for Club Husky (club seats) and will extend along the south stands. The brown section has kept me guessing, but upon close inspection, it appears that this section will be back filled with dirt and then have concrete poured over the top to form that section of the lower bowl, just like the lower bowl under the North upper deck. 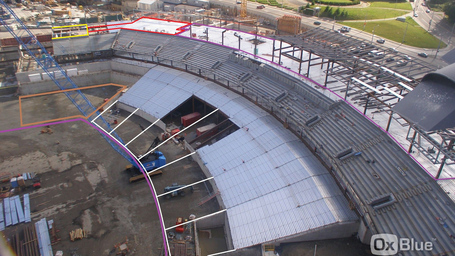 Picture #3 - Web cam #1: They have continued work on the concrete floor, but the most noticeable difference is the large area of gravel just in front of the lower concrete floor. Last week that gravel area was filled with gang forms and other construction equipment, a sure sign that they are preparing to work in that area. I expect that it will first be used by the blue crane to start building the steel structure of the south stands and will eventually be part of the concrete floor. 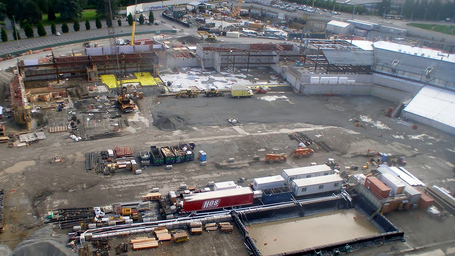 Picture #4 - Another one of my patented design schematic images (yes, I have delusions of grandeur). The brown area on the right will be back filled with dirt, then slab on grade construction to form that portion of the lower bowl. I don't have current design plans for the yellow and red sections, so I am basing my opinion off of the year old designs and interviews I've read. The yellow section should be the sports medicine facility and the red section will be the visitors locker rooms, stadium operations and support areas. 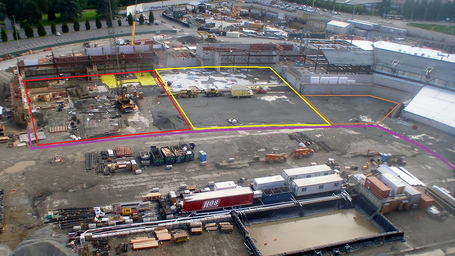 Picture #5 - The view of the west endzone stands and FFB, as viewed from the east endzone. 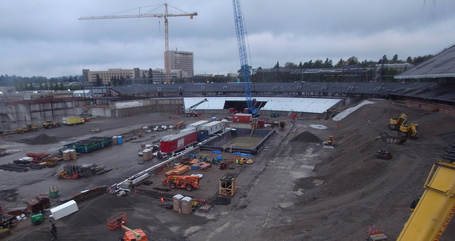 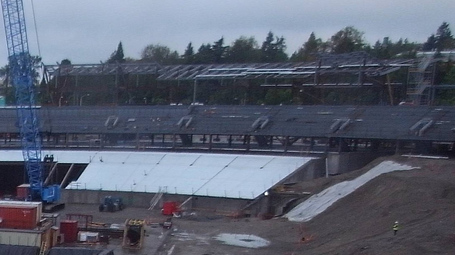 Picture #7 - A screen capture from the Husky Stadium virtual venue feature at www.huskystadium.com. It shows the raised roof section in the middle of the building, but not on the sides of the building.

In my search for a reason for the changes to the roof line, I read a rumor at a Cal blog that will go unnamed. The changes to the roof line were actually part of Sark's strategy to get Tosh Lupoi. The theory is that Lupoi wanted an office equal to that of the head coach, knowing Lupoi couldn't have an office near the center of the building (like Sark's), they needed to add a feature to his office that wasn't even available in Sark's office. Lupoi has a fondness for vaulted ceilings, so Sark convinced Woodard to approve the design changes in order to convince Lupoi to leave Cal and come to Washington.

That's it for this week, September 2013 can't come soon enough!