Share All sharing options for: Better Know the Husky Playbook: Four Verts With a Halfback Wheel

Some people will tell you that the four verticals passing concept is the best play in football. And given how lethal of a play it is, it's a strong contender.

The theory of four verts has been covered ad nauseam because of how many guys are running the Air Raid these days. The nitty-gritty is: against a zone, throw it where they ain't. Your guys running downfield will at some point run past a defender's zone, and into a void before they enter another zone, and that's where the QB is looking. It's not always a home run type play, in fact the goal is not to just huck it downfield, but rather to hit those holes 10-15 yards down the field. Against man coverage, your receivers either have to beat their man straight up, or break off the route and run something that beats man coverage, such as a comeback.

The way the Huskies run it in this case is both unique and textbook. The concept is textbook: four receivers run vertical routes, while a fifth runs a route across the middle to beat a potential blitz. The uniqueness comes from which players run the vertical routes.

The Cougs play a man-to-man defense, and as we saw last week, when teams attempt to have a linebacker cover Chris Polk it's bad times for the other guys. 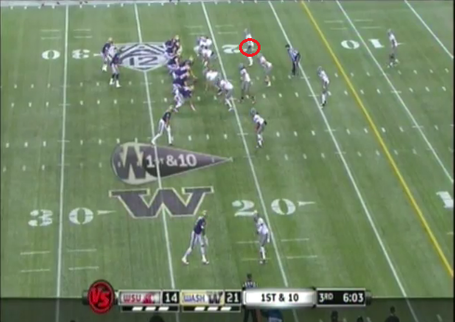 Polk runs the wheel route up the sideline, and simply sprints by the defender. The backer doesn't take a bad angle and he doesn't run into traffic, he just isn't nearly the caliber player that Polk is and gets burned.

Austin Seferian-Jenkins is the H on this play, and if I had to guess I'd say that one of his goals on this play is to create a screen so that the defender covering Polk has that much more difficult a task. He kind of does it, pushing the defensive end upfield a bit, but he doesn't get in the way of the linebacker on Polk.

Aguilar runs the quick five-yard-in, and with the Cougars blitzing the middle linebacker, he was open if Keith Price had needed to check down because of the pressure. He didn't. 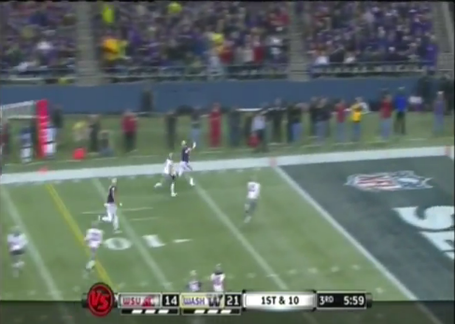 Price drops it right in the breadbasket for a touchdown. 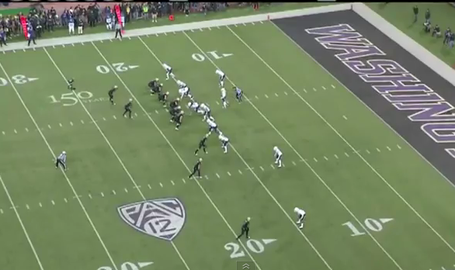 Arizona, like Washington State, blitzes which leaves Polk one-on-one with a linebacker. Bad news bears. The In route is open to beat the blitz, but when you have Polk this open: 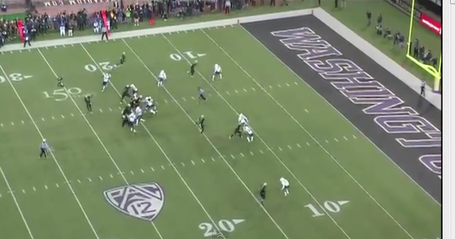 Keith Price is going to take the easy pass and touchdown every time.

One of the keys to who gets more repetitions between Bishop Sankey and Jesse Callier will be which one of them proves that they can be a threat in the passing game. This was a play that, basically, because of Polk's pass catching skills Steve Sarkisian could just call it in and then signal over to the band to get ready. It's a huge weapon for an offense, and while it's not realistic to expect Callier or Sankey to completely replace Polk, they have to be able to make these kinds of plays because they weren't terribly difficult passes to catch. The play would be successful if the ball was dumped off to the underneath receiver, but hitting the wheel route is the difference between being good and being explosive.