Better Know The Husky Playbook: Play Action One Way, Drag The Other

Share All sharing options for: Better Know The Husky Playbook: Play Action One Way, Drag The Other

In this week's playbook breakdown, we have one of the favored weapons of Steve Sarkisian: play action. When you have a great back like Chris Polk, who commands the respect of a defense, play action is a necessity.

The primary goal of play action is to keep safeties from flying up in run support, knowing that there are receivers who could be wide open over the top if they do. The same thing is true for the linebackers, only to a lesser extent as they're not typically responsible for defending deep passes. If they continue to overcommit to the run, you hit them deep.

The Dawgs had pretty much done whatever they wanted to do to the Colorado defense on the game's opening drive. Running, throwing, everything was working and the Colorado defense was on its heels. Coach Sark went to the playsheet and dialed up a play action, with the receivers heading left at various levels.

The play as the Huskies ran it was this:

The A back, Chris Polk, fakes an outside zone, and continues into the flat after the play fake.

The offensive line slides to the right, selling the play action fake, with the exception of the left tackle (Senio Kelemete), who takes the backside defensive end man to man.

The key receiver on this play is the H: Jermaine Kearse. His job is to get behind the linebackers. The coverage over the X and Y receivers is good, so Keith Price snaps his head back across the field to Kearse. Here's what he's looking for: 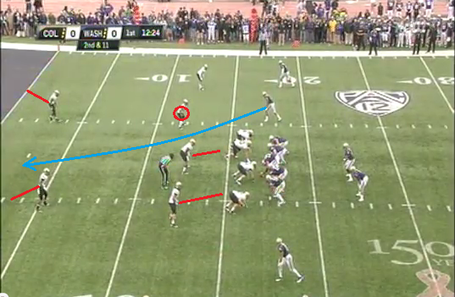 The Buffs are in a Cover 2 look. In order to defend this play successfully, the linebacker over Kearse needs to get into him and redirect him, to disrupt his route and affect the timing. The other two backers bite pretty hard on the play action, so if Kearse is allowed a free release, he'll get right into the open middle of the field. 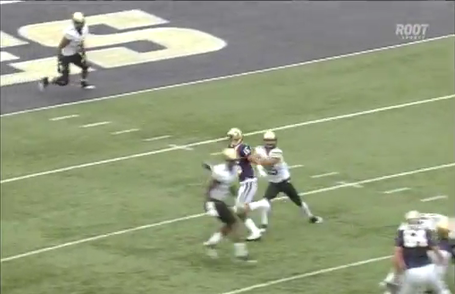 The linebacker barely touches Kearse, and he gets in behind the middle linebacker, who is too shallow after the play fake brought him forward. This is roughly the point where Price spots Kearse, and once he sees him in this position, he sets up and throws a dart. 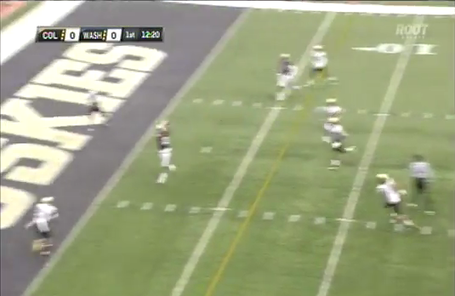 And there's not a defender within 5 yards as the ball arrives. Wideouts should never be this open in the middle of the field (especially without defenders blitzing), but not only that, there's this: 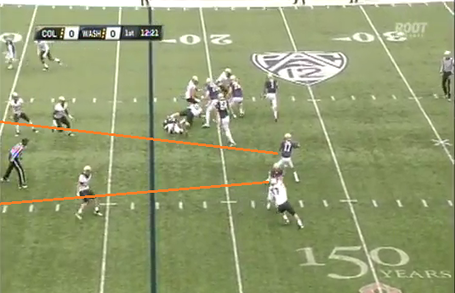 The slide blocking on the offensive line washes down three of the defensive linemen, and Kelemete manhandles the end he's blocking, with the result being a passing lane about as big as you will ever see. There are no players between Price and Kearse. Price doesn't have to go over around or through anybody to make the throw. This is just pitch and catch, and if you're a quarterback who can't make this throw, time to hang up the cleats because you can't make any of them.

This play was a perfect combination of respect for Chris Polk, great blocking on the offensive line, a very good college wide receiver, and poor execution by an overmatched Colorado defense. The result was perhaps the easiest touchdown the Husky offense scored all year.