First, I'd like to wish everyone a very happy Memorial Day weekend, we will forever remember the brave soldiers that gave their lives for the freedom's we enjoy today. I get goose bumps every time the Husky Marching Band starts playing God Bless America while forming the flag pole and then the playing of the star spangled banner while the Flag slowly starts to wave faster and faster! I can't wait to see it in the NEW Husky Stadium!!

Speaking of Husky Stadium, I told John and the guys I'd post another update today, but the "visual stimulation" hasn't quite picked up as quickly as I expected. I even started to get worried that the construction progress was falling behind schedule. The University's "Key Construction Milestones" chart, the steel erection for the football facilities building was suppose to start in early May. Know that it is late May, I got curious, so I went back to Bob Condotta's blog entries from April 23rd when the were given a tour of the construction progress. On April 23rd they were told that the steel for the FFB would start going up in little over a month, meaning this next week could be filled with a lot of visual stimulation. I don't know if this would classify as "falling behind schedule", a few weeks can be made up quickly during the summer months in Seattle.

On to the pictures! As always, the pictures are courtesy of the Husky Stadium Webcams, which you can find at http://oxblue.com/open/huskystadium. Don't forget to click on the pictures for the full resolution image.

Picture #1 - The real fun of this past week was watching as they continued working on the middle deck. They are no longer under the covering of the North Upper Deck and have turned the corner toward the FFB (much easier to see if you look at the full resolution picture). If my eyes are as good as I think they are, the next horizontal beam will get connected to the upper foundation wall of the FFB 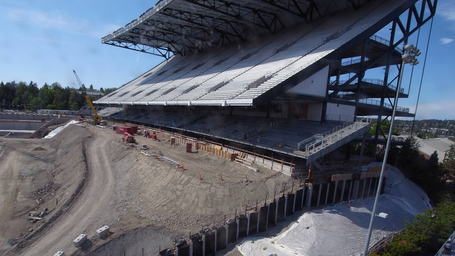 Picture #2 is from the Husky Stadium Virtual Venue, the angle is as close as I can get to replicate the position of the webcam. The idea is to give an idea of what the stadium looks like now, and what it will look like in September 2013. 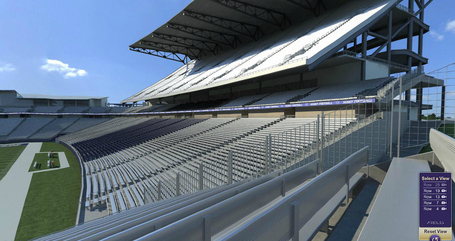 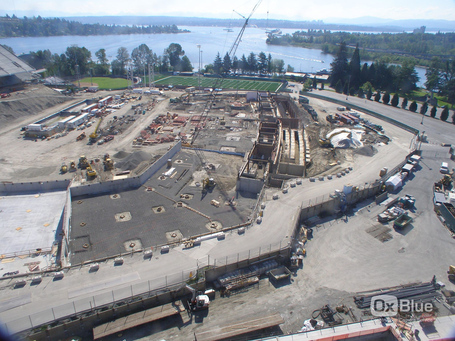 Have a great Memorial Day weekend and GO DAWGS!!!