The Gekko File on the Pac 12 South continues. Pandemonium takes to the streets.

Today we open the file on the Arizona State Sun Devils. The mercurial team from the heart of the desert has been going through a two year transition that started with a makeover of their uniforms and ended with a makeover of the athletic administration office and the Dennis Erickson regime. Not gone, however, is the legacy of Jeff Van Rapphorst, Sparky and, of course, the Tempe party scene. In fact, tell me if I'm wrong, but if this were a poll of how ASU might finish in the Pac 12 tailgating championship, they may well be the top contenders for the title. 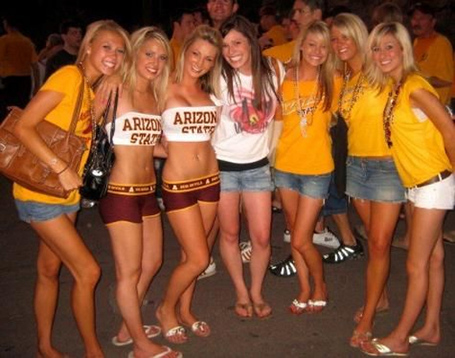 Am I right? Yeah, I'm right. My goodness, how are those things staying in there?

The Gekko File on projected #5 finisher in the Pac 12 South, the Arizona State Sun Devils, after the jump.

The Sun Devils had a strange 2011. By all accounts, it was one of the most successful seasons in their recent history. Consider that they went 6-7 overall and played in their first bowl game since the 2007 Holiday Bowl. Their offense was a big part of that success as they put upper echelon performances in both yards per game (446) and points per game (33). In fact, the trio of Brock Osweiler, Gerrell Robinson and Cameron Marshall were the first to ever post a 4k passer, a 1k receiver and a 1k rusher in the same season. In the Las Vegas Bowl, a 56-24 blowout loss to Boise St, was also a demonstration of their offensive power as Robinson had a record 241 yards receiving in that game.

Still, 6-7 is a losing record and the reality is that the season didn't feel very successful. ASU opened hot winning 6 of their first 8 including a tight victory over a ranked Mizzou team and a blowout win over USC. However, they lost their last five in a row in what can only be described as the most disappointing of all conclusions to a season. The highly anticipated Sun Devil D failed to live up to the hype all season. Omar Bolden and Brandon Magee suffered season-ending knee injuries. Vontaze Burfict imploded. The team surrendered 40 points a game over the last five. You know the rest. Coach Dennis Erickson and his staff, including the venerable Noel Mazzone were canned. Brock Osweiler was a surprise announcement for the NFL Draft. The AD flirts with a number of potential replacement hires including a strange dance with June Jones. Todd Graham ends up getting hired in a manner reminiscent of how the Baltimore Colts left town. Lisa Love gets canned as AD. This man gets hired to replace her (good luck with that). And here we are.

Uncertainty is the theme for the Sun Devils as the head into 2012. They return just nine starters (and two kickers) and face the prospect of replacing some of the most significant contributors (or nut jobs) from last season. The key question on everyone's mind is how the three man race for QB will play out. Sophomores Michael Bercovici and Taylor Kelly are battling RS Freshman Michael Eubank for the job. While Bercovici has to be considered the slight favorite, Eubank is an intriguing prospect at 6-5, 240 lbs. Surprisingly, he's a running QB in much the same mold as Jake Locker.

Whoever wins that job will have the benefit of having Sr RB Cameron Marshall standing behind him. Marshall is a 1000 yard rusher who showed flashes of dominance last season when given the chance to contribute. He's probably one of the three or four best RBs in the Pac 12 this season and remains one of the best weapons in the Sun Devil arsenal. He'll be counted on heavily as will Sr. WR Jamal Miles. Miles is a dynamic athlete who is probably the only proven commodity among a questionable group of receivers.

Defensively, the Sun Devils will try to build around Sr. LB Brandon Magee and DT Will Sutton. They are overhauling their defensive secondary and the new coaching staff is experimenting with, what else, a 3-4 defense. There are a lot of question marks on this defense, in particular on the defensive line.

Beyond offense and defense, the impact of the new coaching staff will be closely monitored. Todd Graham arrived to Tempe under auspicious circumstances, but there is little doubt that he's made an impact. The themes around his program are centered around intensity and discipline. Ted Miller describes him as "old school" - his players are not allowed to cuss, not allowed to wear jewelry, not allowed to forget to address adults as "sir" or "maam" and not allowed to, you know, be idiots. I'd say that this is a far cry from Dennis Erickson's more, shall we say, liberal style. While these changes sound great for the perennially loose Sun Devils, the question is whether or not results will follow.

There are so many similarities between Seattle and Tempe that I don't even know where to begin on the connections. Hmmmm. Let me get back to you.

I think ASU still has some attractive talent and it is hard not to believe that Todd Graham, as maligned as he has been, isn't a good fit for that environment. However, I see a lot of growing pains in the near future as this team adapts to a new staff, breaks in a new QB, and replaces key veterans in the secondary at receiver. The schedule won't do them a lot of favors as they play both Illinois AND Missouri in the first three weeks of the season. They do catch a break in missing both Washington and Stanford this year, but I still see this as a four, maybe five, win football team this season. Look for the Devils to struggle making Graham's offense click in the first half of the season and expect them to completely under-utilize their stud RB. On fhe flip-side, don't be surprised if the D bounces back and that LB Brandon Magee establishes himself as the heart and soul of the team. And, of course, expect very ... errr .... interesting tailgates.