They've been running the triple option in football for a thousand years, and though there aren't a whole lot of teams that still run it in the traditional way, it still has life in the modern age.

The read/bubble option is based on a play that we in the Pac-12 are familiar with: the zone read. The team that is perhaps most famous for running the play currently is Oregon under Chip Kelly, but Rich Rodriguez was very much a pioneer of the spread running game and it will be a staple of his offense at Arizona. The Huskies too, have run the read option over the course of their recent history with Jake Locker leading the attack.

The meat and potatoes of the read option is the quarterback, from the shotgun, "reads" a defensive end or outside linebacker, and either gives to the runningback or keeps the ball, depending on the action of that defender. If the defender stays home, the ball goes to the RB moving away from the end, and if the defender pursues the back the quarterback pulls the ball and runs into the space the edge defender vacated.

What some teams will do off of that read option is to add a third option to the play, either a back looping behind the QB, or a receiver establishing pitch relationship with the QB (usually through motion). If the QB keeps the ball, there's a second defender that they're optioning.

The Steve Sarkisian take on the zone read triple option is to replace the third option with a bubble screen. Here's the chalkboard version of how they ran it against Arizona with the defender reads in red:

This version is a power to the left rather than the traditional zone, but the concepts are the same.

More after the jump.

There are a few advantages that the bubble offers over the pitch option. First, pitch relationship does not need to be set up, so no motion is necessary to get there. Sark loves motion to create mismatches, numbers and angles, but all it would do in this play would be to tip the offense's hand a bit, and maybe bring a defender into a place where the offense doesn't want it. Second, it minimizes risk. Instead of pitching the ball backward where there's the risk of a fumble, if the bubble pass gets dropped or goes errant it's an incompletion and the Huskies huddle up to run the next play. Thirdly, it minimizes hits on Keith Price. With the bubble WR farther away than he'd be on the triple option, Price doesn't have to absorb contact (which would likely mess up his throw) before passing the ball.

Assignment-wise, the linemen and tight ends are all blocking the power left, while Z blocks the man lined up over him. X takes a couple attacking steps, then backpedals and "bubbles" toward the sideline.

Presnap, you can see the two defenders who (ideally) would be optioned. 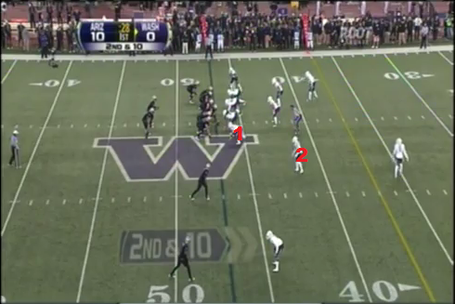 From there things get a bit messy. Defender #1 sits and reads, yet Price keeps the ball. If he had given to Chris Polk on this play, he might still be running, because the offensive line blocked the power about as well as you can, as seen here: 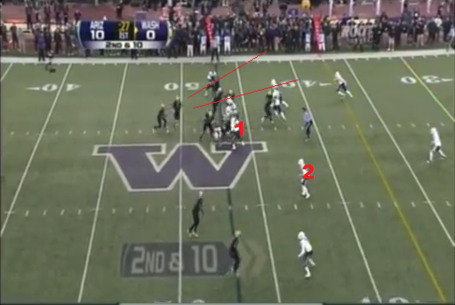 You can see that there's a nice hole opened up, with Colin Porter leading up into it. Looks like the first guy who could possibly make the play is the safety, and I'll take CP1 against a safety any day.

Anyway, defender 1 sits on the edge there, and #2 is still waiting for the play to develop. If #1 had chased Polk, The play would be set up magically: #2 would have to commit to Price or Kevin Smith, and Z can block the man over him and away they go. Instead, #1 pressures Price to make the throw, and #2 being free puts the WR in between which defender to block. 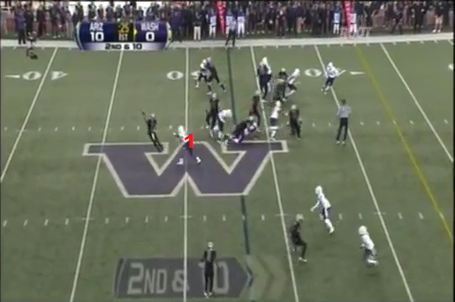 Price hits Smith, and he manages to get upfield and drag a defender for a gain of about 8. Consider: the play was run poorly, and still managed to gain the Huskies 8 yards. It's not hard to see why this play is a staple in Coach Sark's playbook.

Here's another example (this time they run it properly) against Colorado: 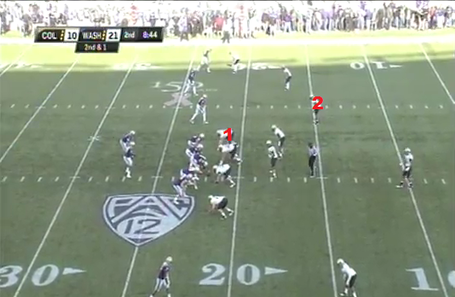 Different formation here, and they're running the zone instead of the power, but it's the same basic play. 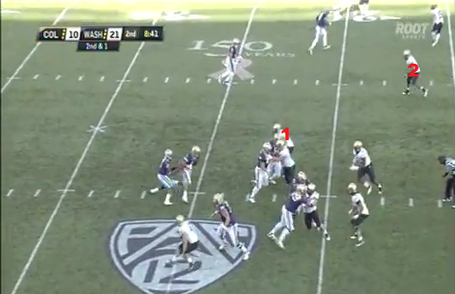 #1 sinks in, Price pulls the ball and begins attacking #2 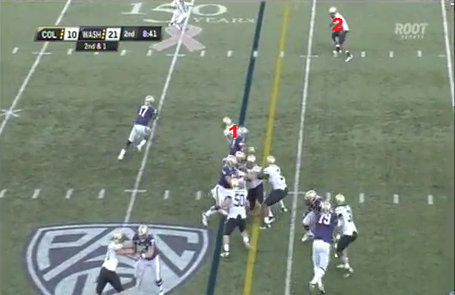 #2 sticks with the bubble, allowing Price to slide down for a gain of about 7 yards and a first down. It might not be a home run, but the read/bubble option is a tough play to defend and when run well is going to consistently gain 5+ yards. In the 2012 season, when you see the read option, be sure to keep an eye out for a bubble accompanying it.