Share All sharing options for: Better Know The Playbook: The Jailbreak Screen

In the first entry in a series looking at plays that are in Steve Sarkisian's playbook, we're going to break down a wide receiver screen that has commonly become known as "The Jailbreak."

Since the proliferation of the spread offense the jailbreak screen has become a staple of many teams' offensive repertoires, and being low risk with a lot of big play potential, it's easy to see why. It's a versatile play that can be run out of a lot of different formations and alignments and the philosophy behind it is simple: get the ball into the hands of a playmaker with blockers in front of him and attack the space on the edge of the field.

It doesn't take a whole lot of critical thinking to get into Sark's head here. Goal-to-go from outside the 5 can be tricky for a playcaller. You're too far to execute a lot of your goal line pass plays, and don't have the space to run most of your traditional passing game either. Running the ball would be a good choice, but it's a bit predictable for a guy like Sark, and it's also not likely to score in one play, so he dialed up the screen to Kasen Williams. You don't call this play to set up 3rd and goal, you call this to punch it in, and this play gave them a great chance to do just that.

Here's how the Huskies had it drawn up against Utah:

Assignments and execution after the jump.

Pre snap, Chris Polk (A) motions from Keith Price's (Q) left to his right, and keeps some momentum through the snap of the ball which allows him to get a jump on getting out to throw a block on the corner over Kasen Williams (Z).

X and Z both take a couple of steps upfield, attacking the corners to keep them from jumping the screen, and also giving the play the time it needs to set itself up in the backfield. X isn't getting the ball - it's going to the right the whole way by design - but by mirroring the play the backside defenders are kept honest and are basically non-participants.

H and A are blocking the corners over the outside receivers. It's important that the play is going to the weak side and that Polk is throwing the key block out of the backfield. Since it's the weak side, there's no nickel defender to worry about (he's over H), and with the RB next to the QB it keeps the linebacker and the safety on that side from moving into a position where they can make a play.

The tackles have to keep the defensive ends hands' down, and keep them from getting into the passing lane. You'll see a cut block by the playside tackle on jailbreak screens 9 times out of 10 (and Erik Kohler does exactly that).

The interior linemen sell pass for a beat to get the defensive linemen to pursue the quarterback and run themselves out of the play, then take off and block level 2.

Austin Seferian-Jenkins (Y) sells the backside play by blocking the man over H.

What ends up happening is that the Huskies get a big numbers mismatch, and even though Colin Tanagawa doesn't get to level 2 fast enough (he ends up behind KW), Williams still gets into the end zone untouched. 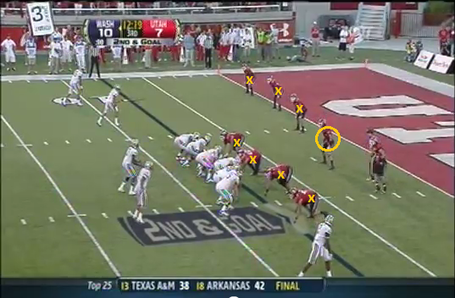 The players with X's have no shot on this play. None of the defensive linemen pick up on the screen, and the DB's on the backside are kept home by the jailbreak action over there. The Mike linebacker (circled) has a chance to make the play. He's the guy who Tanigawa does not get out and block, but at the snap of the ball he moves two steps to his right, and that's all it takes. He doesn't have the speed to recover from it and by the time he meets the ball carrier they're at the goal line. 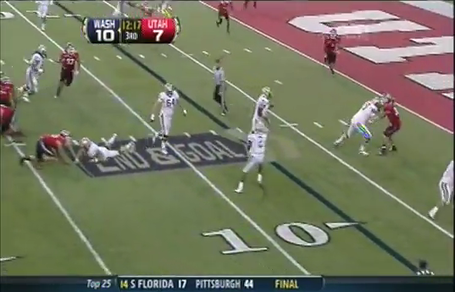 You can see it here as K-Willie catches the ball: The corner is taken care by Polk (his right leg visible), Colin Porter has a body on the Will backer, Drew Schaefer is headed toward the safety, and Tanigawa (64) is the only guy who missed his assignment, but Williams has enough speed to make it irrelevant. Also note Erik Kohler right at the 2 on "2nd", as he threw a perfect cut block and got the DE to the ground just before Price delivered the ball.

It wasn't a perfectly executed play, but it was close. The design of the play gave the Huskies a great opportunity to give themselves a numbers advantage with the ball in the hands of a playmaker. Expect to see a similar version of this play more than once this year when Sark wants to let Kasen Williams make a play.