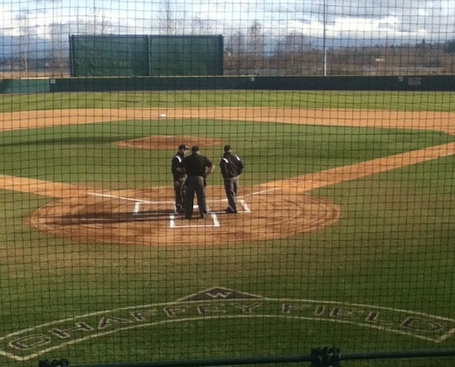 The "W" is actually pointing east...

The Dawgs pitching rolled again Sunday, allowing one unearned run on five hits in 16 innings, 13 straight scoreless to finish. If we can get pitching like that the Dawgs have a real chance to get into the Top 25 in two weeks. Why two? We have to win four of the next six weekend games, including three vs. the #17 zeroes. How we fare the next two weeks will have a big impact on this season as a whole I believe. Actual analysis after the jump..

Well that was a great finish to a quick pitching duel. After leaving 11 runners on base through 6 innings, the Dawgs finally pushed the winning run across in the bottom of the 7th to win 2-1 and clinch the series. Saint Joseph fought hard, and it was a close game very much like the opening contest Saturday, but this time it was a defensive miscue that hurt them.

With runners on the corners and one out, Anselment hit a shallow sac-fly near the RF line off his hands, getting jammed on a high-inside fastball. SJU RF Kumpel made a great catch and throw, putting a bullet right on the 3B line-home plate corner; Lamb (who had another great day at the plate) was gunned down by 4 steps. SJU catcher Palmer had plenty of time to catch the throw off one short-hop and turn to make the tag with 2 hands. He panicked a little and rushed, only reaching out with his glove to tag Lamb on the legs. Lambs have strong legs, and he kicked the glove hard enough with his shin to knock the ball out.

Palmer was absolutely devastated, crouched over with his hands on knees for a good couple minutes like a statue next to home afterwords. I feel for the kid, they had a great chance to get an upset win, and fate just doesn't go their way. I am in no way trying to be cold or course, but he didn't apply his coaching and fundamentals to the detriment of his entire team. Palmer will learn from this, though its one hard way to learn a lesson.

RHP George Asmus is performing exactly as one would expect of a George: quiet, workmanlike and efficient. Five innings of 1 hit ball with no earned runs surrendered should = a win, but the offense once again couldn't score 2 runs for him. Asmus actually has SS Forgione to thank for the no decision, for it was his airmail delivery over first base with two outs in the 3rd inning that allowed the one unearned run to score from third. Asmus came right back to get the third out on a liner to Pehl at 2B, but it was too late, the damage was done.

The Dawgs answered in the 4th with a two out rally to knot the game at 1-1. Anselment, the offensive star of the day, walked and Mitsui was took a pitch in the back and Ely pinch-hit for Forgione, who proceeded to hit a RBI single to center scoring Anselment.

Nick Palewicz has shaken off the early struggles in an attempt to rescue his ERA. He pitched 2 scoreless innings and had much better mechanics, therefor command. Easy how that works. The best part? After walking the first batter faced who was advanced with a sac-bunt, he found a flashing star and went invincible for the next 5 batters faced. Two swinging strikeouts finished off the 6th, and then three straight ground balls to 2B, SS and then 3B and the 7th was done in succession. Win earned, and I hope to see this Palewicz for the remainder of the year; he can be a killer setup man in the 7-8th inning before Fredendall. Ahh, the dreams...

The recipe for a walkoff win is as follows: Lamb doubles to left field, Campo singled past third base putting runners on the corners, and then you can start from the top if you need a refresher on what happened next.

Mac Acker was targeted to be a starter, it was just a matter of when. He earned his first starting nod after making four appearances out of the bullpen, and didn't disappoint. He only gave up four hits over 5 innings, with his velocity up this time around and his curveball was on point. It was very encouraging to see our only LHP perform well, we are going to need him down the stretch. Acker should have his own ice tub if we make the postseason.

Tyler Kane (2), Adam Cimber (1) and Dae Yang Kim (1) combined to throw 4 innings of one hit, scoreless ball to complete the shutout. Kane had 4 K's in his quick 2 innings, and Cimber had some nice cut on his fastball and slider again with 2 K's in his one inning. RHP Kim went 3 up 3 down to finish the game, continuing his scoreless inning streak. Kim doesn't throw incredibly hard, what he has is a nice side-arm delivery and lots of movement on his pitches with good command. He can locate some nasty junk and struck the last batter out with his 2-seam fastball that looks like its going across the plate outside, only to cut back in at the last second over the outside corner when facing a right handed batter. Its a wicked pitch, and one he has mastered.

The offense took 9 innings, but they finally woke up Sunday in the 3rd inning of the second leg. Two runs in the 2nd, three in the 6th and one in the 7th with the first Washington HR of 2012 in Washington in the 6th. Anselment cranked one deep over the center-left field wall to keep pressure on the other DH & catchers to perform or else; he wants to hit.

Anselment singled to start off the 2nd, Mitsuibishi walked and Santy laid down a sac-bunt that SJU pitcher J. Carter turned into gift bunt with a bad throw. Anselment came around to score, a walk later and the bases are juiced for Meggs to get a RBI single to RF. Pehl, who went 0-4, then killed the inning with a double play ground out. This inning could have been big.

Anselment hit his HR in the 6th when the Dawgs sent eight batters to the plate, Brown and Meggs hit RBI singles and it was now 5-0. Lamb reached on an error to start the 7th, and then stole a base! Lamb was really feeling it this weekend. Campo doubled to center and Anselment hit a sac-fly to make it 6-0, and the job was done.

The entire team performed very well this series, and will need to be at their best this weekend if the Dawgs want to keep the winning streak going.