Share All sharing options for: Huskies Targeting Trophies This Spring 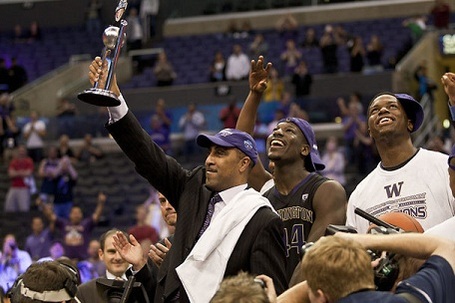 Oh, how short our memories have become in the world of sports today...

*This NSFW link is in no way meant to represent the views of our honorable Coach; just comedy people. Laugh at the links, it's Monday.
**Edit: This was written before JB posted TMMW; is not directed that way personally. -SOS

Even though the men lost to UCLA in frustrating fashion, it appears Coach Lorenzo Romar once again has them in the right mindset coming out of the loss. Washington finished with more wins than anyone else; that talk about "backing in" to to the regular season title is hogwash**, in my most humble opinion. After being picked by the media to place 4th in the PAC-12, we finished #1 in da hood G (0:40); not one media member picked the Huskies to finish on top, not one. That's OK, let 'em keep underestimating the power of The LoRo Way; he's like an ocean, gentle and still on the surface, an unrelenting force with a drive nothing can stop below. Every season he is put under the microscope, yet calmly ends up with the coolest seat in the house when the music stops, eating some cake, smirking at everyone over a cup of Purple drink. He knows the secret formula for LoRoBall: *sugar, water, Purple (2:20). I love Purple drink, its on tap 24/7/366.

Coach Romar earned my trust long ago; even though he isn't perfect, and he will be the first to tell you being the humble leader he is, he has shown he can handle adversity and persevere. I think some underestimate the power of those two personal qualities, and his many other "coaching intangibles". Now it's time to figure out how to get over the Sweet 16 hump, which I fear he will always be misjudged by until he finally snares that monkey with some white netting and pair of scissors as big as the Narrows Bridge. Just look at the history and perception of the program before he came here, and look where it is now. The next time anyone wants to even think about talking about replacing the Dean of the PAC, can they all at least wait until he has a few losing seasons in a row?

Sound off: How far will the Huskies go in the 2012 PAC-12 tournament? Will Washington get an at-large or automatic bid, what seed do we deserve and which seed will they ultimately receive? Finally, what do you think will be the keys to the Dawgs being successful this postseason, and will Washington finally get to the Elite 8?

Softball is anything but soft, again; Baseball has been working on their beach body, too

Softball won their second preseason tournament title out of two tries this year and look like a team ready to install a new trophy case. The Lady Dawgs finally come home to play March 10-11, hosting the Husky Softball Classic featuring Seattle U, North Dakota and the Ladies. It was a great weekend weather-wise for some stickball, and I never thought about wearing a jacket, so lets hope Spring comes around early after some heavy flirting. If you have the time this Spring, be sure to get out and support your Lady and Diamond Dawgs, they have some great deals for families and just great pricing overall.

My girls had a blast chasing down foul balls and taking pictures that close to a team, too. I have tons of photos on my phone now. They also can't wait to see the Ladies in person finally; with this recent development on my schedule and a couple previous requests from the community, I will start some analysis for the Ladies soon to complement the great work on the non-revenue sports by Randall Floyd.

The baseball team did some work this offseason, in both the weight room and gene pool. They put the Purple tie around their head and hit the street hard to shed their weak perception, and its paying off. We are no longer the the team receiving pity while dwelling in the basement; no, that is Utah now, in yet another sport. Welcome to the PAC, Utes gonna love it. Patience Utah, the new TV money will salve the weak spots, helping you to rise much faster than WSU did. That's going to be the topic of a drunken ramble in a Pullman shanty someday, mark my words.

In person the Dawgs look big and strong, like a Div-1 team should. And when I say big, I mean we have some serious height and builds that can still add muscle. Through twelve games, the Dawgs have eight home runs total by eight different players; Washington hit 11 home runs all of last year. This team has some serious power at the plate, plenty enough to compete with the best in the land from what I have watched. Our question marks will be defense and relief pitching. That being said, both performed very well this weekend, so the potential to be consistent is there. More baseball in the review post.

Trivia Question: Baseball swept the double-double-header to start the season 9-3, already half way to surpassing the win total from last year in only the third week of the season. Three series up, three down; if the Diamond Dawgs keep "winning the series", we will see both softball and baseball in the 2012 postseason. When was the last time both the ladies and gentlemen of summer went to the postseason together?

Men's Golf went into the weekend ranked #1, but lost to #2UCLA. I think we've had enough of the Bruins for one weekend. Even in defeat, they still have a very strong chance to win it all. Four teams with title chances; can't ask for more.

Once a team gets to the postseason its a fresh start, your 0-0 along with everyone else. One can always have hope at the start of the second season. Go Dawgs!