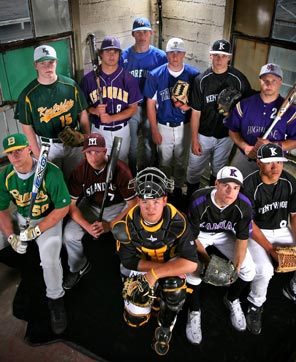 Remember how awesome it was when you got the good stuff after a game of T-ball? That's what this series felt like. If it appeared like there was no way UW was going lose game three and it was all in fun, well, that's because there was no competition, and you were actually watching a little league game. Thanks for visiting CSU Bakersfield, do you want fruit punch or Hi-C?

All fun aside, CSUB never gave up, they were worn down over time. I applaud their effort and attitude, they didn't go down easy. As the innings went by, the Roadrunners seemed to slowly fade, a visual representation on the scoreboard of their pitchers' endurance and quality slowly disintegrating. After two games they were already dried up, needing a big start from Sunday starter T. Aikenhead. He proceeded to give up six runs before he could get five outs, lasting only an inning and a third before grabbing the ice; CSUB had nothing left, and it was only a matter of when, not if, the Dawgs would apply the mercy rule.

Whether it was by design or an indicator of the Roadrunners heart, the Dawgs milked this one into a full game, two innings more than the 18-6 bombing run over CSU Northridge Feb. 27th, lead by Camporeale with his seven RBI, grand slam career day at the dish. In hindsight that performance should have been seen for the portend it was. Washington should schedule the CSU teams more often if this trend continues; UW went 9-4 against non-conference California - their only traveling destination so far - programs this year, with only these last three vs. CSUB at home. Going 6-4 over the OOC road schedule - which included two 1-run losses - isn't spectacular, but it is winning baseball.

Jayce Ray put the proverbial fork in the series with the first Washington at-bat Sunday, propelling the Dawgs to a four run lead after which they never let off the gas, even as the substitutions rolled in. A three-run 8th inning with the second stringers hitting speaks volumes to our depth on the pine, tho they did face the back end of the 'Runner bullpen. The Dawgs scored in all but two innings, the 3rd and 7th.

When nine Dawgs combine for 12 RBI while ten each record at least one hit the words blowout and 10-run rule become relevant. They earned seven walks over four strikeouts, three bean jobs; also capitalizing on two errors and two wild pitches with four stolen bases. A complete performance in every category and great team win to help keep the momentum strong while the Dawgs wait until Friday to play next.

Things are gonna change, I can feel it.

To experience full recap-ulation, navigate within...

The Fine Line Between Stars and the Rest of Us

"Minor League Guy On Third" is now my background, it is fantastically epic on so many different levels for those that have played ball after high school competitively. Combine that with Gregg Popovich calling Tim Duncan old and time stood still Sunday in ways only few days in sports can accomplish.

And it was only fitting that on that day Coach Meggs would try to get as many guys into the game as basebally possible. With the win securely in hand after the 5th at 9-0, the Skipper started a pinch-hit marathon to get his fix for substitutions - 22 Dawgs made an appearance Sunday, a new season-high - throwing "the book" aside, if only for moment. It was "everyone gets to play" all over again, just like the younger years.

CSU Bakersfield scored six runs on 21 hits for the series, seven hits each game with two runs Fri, three Sat, and only one scored Sunday. Unable to string anything together, they had to turn to the long ball just to break the shutout in the last inning of work from Voth.

Winning Fact: Starting Pitching. The Dawgpen had it pretty easy all weekend with the starters combining to work 19 of the 26 innings: Davis seven, West and Voth with six a piece. Austin Voth now has back-to-back starts with great command, really coming on strong as of late to solidify Sunday. After the hard-luck no decision last week vs. the quackers - in which he first displayed the improved accuracy - one wondered if which pitcher would show up; thankfully the new and improved Voth came out leaving nothing to chance in his best Scrooge impersonation of the year.

No free passes = no unearned runs ruining your shutout win; another lesson learned for another pitcher. If you have been watching closely, you have to stand up and applaud Dave Dangler right now for the way he has the entire staff performing right now, peaking at the perfect time heading into the Oregon St. and Stanford weekends, when we will not win without stellar pitching.

The Dawgs had a chance last week to perform on a semi-national stage, a trip setup to prepare to the team for the first true national test: the televised game vs. OSU this Saturday March 31st on ROOT Sports at 1:05 PM, and the Stanford home triple shot right. From what I gather more than a few national talking heads will be watching that game, considering it a great measuring stick to see where both programs really are right now. Pitching will be the theme of the series; whoever controls the bump will win.

Stanford, the name says it all. If those overrated U$C boys can pull out a win over the Cardinal, than by George so can the Dawgs, two if they drink some Purple Power. Pitching is always important, but I see this series right now as a battle of the bats, with both teams possessing very, very deep offensive rotations, including clutch bats off the pine. The AD is going to need a couple extra pallets of ball-buckets on hand for this one.... 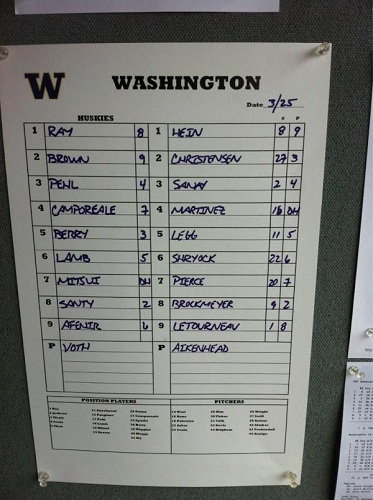 This ^ is the starting lineup. To see the little league 22-man final edition, please refer to the official box score, linked above. I'm not going to type their names any more than I have too....

Voth starts the game with a perfect inning, finish off the last two with K's. He was on auto-pilot.

With 13 runs and 12 runners left on base, 14 hits and the CSUB plays to boot, this recap has the potential to get very large in a hurry. Condensation is imperative if you want to keep your sanity.

Ray singled for Brown to bunt him over twice in the game, with Brown successfully laying down the sacrifice each time. Campo RBI single past third, Berry gets another bruise - apparently the CA schools are ticked he spurned them to head north for UW - for Lamb to hit a shot up the middle putting Berry at third and scoring Campo. Lamb showed off the wheels again to take away the double play before Mitsui drove a 2 RBI single to left. That's the way to start off a broom game.

Afenir singe - Ray walk - Brown sac bunt - Pehl 2 RBI single to the opposite field shallow hole again. Goodbye Aikenhead, hello Barragan. He was a lone bright spot for the 'Runners, shutting the door here and holding the Dawgs scoreless in the 3rd.

CSUB: two K's, one ground out

This may be something you would glance past, but it a team puts 50% more balls in play than the opposition, what do you think their odds of winning increase to? Combine that with a porous defense, and this time it equated to a 13-1 victory.

New Pitcher: Walkley. Brown walked, stole another couple bases and scored after Lamb was Walkley'd with the bases juiced. New Pitcher: Camachao, who struck out Mitsui and Santy.

K, single and double play. Wait, we turned a double play?? Sadly it was not one of the normal infield varieties, instead a great catch by Brown in RF who proceeded to gun down an unwise base path noob who should have been tagging from first, not going at first. Brown responded to the error yesterday with a nice slaying here and doing the little, savvy things you expect from a Senior all day long.

Afenir earned a bruise and scored on Ray's team-leading third triple - of the teams five total - who scored on a sac-fly from Brown. If it takes three sacrifices to earn an RBI then so be it, well earned it is.

The short porch in right field struck again, a leadoff solo HR for 'Runner Brockmeyer to make it 9-1 Dawgs. CSUB had a double as well, and it was time to let the Dawgpen finish it up as both teams starting emptying their benches.

Mitsui doubled to complete his good day at the dish, advanced on a wild pitch and scored immediately afterwords on a Santy ground ball to second that was deep enough.

In came Palewicz, who again gave up a few hits, three here, ye left 'em scoreless. A little less drama would be nice when he comes in, but he still has a nice scoreless appearance streak going.

We have another Jacob Coats sighting, and this time he did well at first, then struggled. Coats earned a quick two outs, only to hit and walk the next two, earning an even quicker hook for Wright to replace him, who finished off the inning with a strikeout.

If you thought the Dawgs would not lay it on any more, well you thought wrong. These guys didn't ride the pine just to lay down. No, they wanted the ball, and they were gonna score.

Meggs for Campo in 7th: fly out

Curiously, we have our first Mac Acker in the outfield sighting in a very long time. He replaced Jackson yet ended up just watching Joshua Fredendall strike out the side swinging. Fredendall against CSUB at this point in time was entirely unfair, they didn't stand a chance.

Now let us see if the Dawgs can keep the brooms out against OSU in Corvallis this weekend. Look for a Q & A with Building the Dam this week alongside the series preview, as well as some Pac-12 content, as I test the conference waters out finally...

Have any questions/suggestions? Fire away! I am always looking for interaction and reader-generated ideas.