Sunday Brunch Links: I just found this, had to share. "Cup of coffee" at its absolute finest, good laugh. 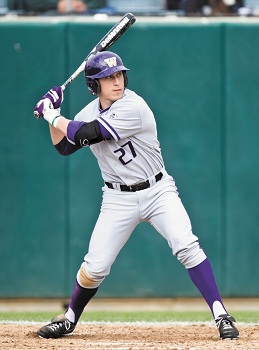 What a difference some sunshine can make. As the games get warmer, Husky Ballpark will earn its reputation once again as a hitters park, putting even more of an onus on the pitching. Good thing we have Aaron West and Tyler Davis to combat the 1-2 punches we will see in conference play soon. I left the jacket in the car yesterday to my delight, next to the umbrella and gloves where it belongs.

The Dawgs picked up right where they left off, continuing the power display en route to commanding an early 5-0 lead after three innings and clinching the series. Washington can ill afford to lose any more games they should win with the Pac-12 deeper than it has been in years, so I hope they come out just as aggressive this afternoon. Today will be the last "easy" game of 2012; from here on out its the conference jungle to tangle with, Indiana Jones style.

Washington and CSUB had twelve and seven hits - same as Friday - only this time around the Dawgs turned them into seven runs instead of four. Two more solo homeruns with three doubles, all by different non-senior players, and six Dawgs with one RBI each is very encouraging to see. The offensive depth just keeps getting better as guys get more at-bats.

No matter who starts, if someone is struggling we have a guy on the pine who can stand up and get the job done. Just look at the Roadrunners, who only have a couple power bats amid mediocre to poor contact hitters, to understand why having two or fewer good hitters is just the same as having none.

Without the threat of having to face multiple big bats in a row, a pitcher can just throw around the good hitters to get to the easy outs down the order. Having many good bats is preferable to one or two great bats: look at the 2001 M's lineup, then ask Barry Bonds to describe the years he spent standing around with a bat on his shoulder while being intentionally walked....

Washington is a perfect 11-0 when leading after the 6th inning, 10-0 after the 8th and 9th as well... let that sink in, for the percentages say it won't last forever. The Dawgpen has owned the last third since game 1, Fredendall's first save, but so have the other guys, as the Dawgs have only come from behind once after the 6th.

Tyler Davis had a 15 2/3 scoreless inning streak heading into contest while leading the Pac-12 with a 0.90 ERA. He has received excellent run support in both starts, allowing him to stay relaxed and throw his game, which is anything but conventional. The 'Runners were off-balance all afternoon, visibly clueless as to what Davis was going to throw next. Tyler can "work backwards" and change speeds very well, with the added advantage of a deceptive delivery that hides the ball. I now have film to decipher on Tyler; working on the rest of the pitchers.

He allowed one run on four hits - two were infield singles - spread over seven innings of work, never allowing more than one hit in an inning or a runner past second until the 7th. He extended the scoreless inning streak to 22 1/3 before giving up a solo HR in the 7th inning, his only mistake alongside a double in the 2nd inning. His change-up was the noticeable factor yesterday, working as well as his curve to earn his seven strikouts and keep the ball on the ground. When I publish the piece on pitching during the week you will see it in action, it was nasty...

The best power hitter so far is....Michael Camporeale?? In the bold stats above he either leads the team or is second- 30 at-bats minimum. Before the season not much was said about who was going to start in RF, let alone specific strengths, beyond this:

The primary candidates in right field are a pair of JC-transfer newcomers: Mac Acker and Michael Camporeale. Acker, who is also very much in the hunt for a spot in the starting pitching rotation, was the Northwest junior college player of the year last season as both a pitcher and outfielder. Meanwhile, Camporeale was his conference's MVP and earned All-America at Cuesta College in central California in 2011.

"In right field we have a good battle going on," Meggs explains. "Acker is someone who the coaches are pushing me to give an opportunity to play out there as he did last year at Colombia Basin.

"Michael Camporeale is a right-handed hitter," Meggs continues. "He's very steady, physical and an above-average runner. He can throw and right now would be penciled in in right field with Mac, depending on how we want to use him." - 2012 UW Baseball Preview Part III: Outfielders

Cuesta College has a great history for a JC program. They are currently on a 15 game winning streak, so they must be doing something right down in San Luis Obispo, CA. Sound familiar? I wonder how many of the Cal Poly Mustangs Campo knows, and if he warned his teammates about the wind before the series...

With good wheels, physical build, glove and a power bat Camporeale is exactly - well, he's not a LH bat, only knock - what you want in a right fielder. Mac Acker won't be seeing any starts in the OF until next year at the earliest with the depth the Dawgs have right now.

Anselment has been hitting the cover off the ball at times this year, attempting to force feed himself more at-bats at every chance he gets. He currently leads the team with .385 AVG and .590 SLG% in 39 plate appearances.

CSUB catcher F. Martinez hits a 2 out double to center, the first of only two extra-base hits for the 'Runners.

Begin launch sequence, Dawgs Alpha Dominus. When they score first, they win 4/5 of the time (8-2 record).

Lamb and Berry grounded out to the left side, but Pehl didn't care that there was 2 outs, he still wanted to hit a double. Commence two out rally: Meggs HBP, Forgione RBI single to left, Ray RBI double down LF line. 2-0 Dawgs.

CSUB put themselves away here in the 3rd, essentially the game was over it seemed the rest of the way, thanks to their weak team defense. Anselment hit a shot down the LF line but was thrown out at second. No matter, Campo did the same thing only he made it to second. Lamb walked to put runners on first and second, one out for Berry to hit a 2 RBI single past short. A throwing error by the LF on this hit allowed both runners to score and put Berry on second. 4-0 Dawgs. Pehl followed with a RBI bloop single into the shallow right-center hole scoring Berry, 5-0 Dawgs. The offense did their job, up to the pitching to sew it up, and stitch it up they did.

single for each team, Pehl again for UW.

CSUB 1B Christensen laid a picture perfect bunt down the 3B line that completely caught everyone sleeping. Tyler made sure it was for naught.

Davis, to my utter surprise, came out to work the 7th; first Dawgs starting pitcher to do so all year. He had the heart of the "Runner order to work though, and looked like he would do it again until catcher Martinez ripped a hanging change-up on a frozen rope into the scoreboard. That HR left the yard before you could blink, it was a line drive w/o much arch for a home run, and with the wind blowing out to center for a change it might have had some help clearing the wall. Scoreless streak snapped, shutout lost, but he still had a 4-hitter going, and proceeded to get the SS Shryock to foul out easily. Almost perfect again... something tells me to watch out for a gem or two down the road from Davis before he graduates.

With that HR the bar was raised. Not ones to be outdone, Anselment and Campo combined to hit back-to-back solo homers immediately in response. Anselment pulled one down the RF line, and Campo blasted one directly over the left-side 395' marker on the center field wall. Campo wins the shot put contest without even a tape measurement needed. 7-1 Dawgs, finally chasing CSUB SP Brattvet onto the pine in the process.

Afenir came in for Pehl, his first assignment to 2B this year, and our first chance to see what a Forgione / Afenir middle-infield looks like. I've been waiting for this, with my assumption being it is out best defensive alignment. Results mixed, need a bigger sample size after only two innings.

Cimber replaced Davis, only to surrender a lead-off single that was hit hard to LF. That at-bat didn't feel good, and I was right. Another single, fielders choice (failed double play by Afenir-Forgi), wild pitch and single made it 7-3 Dawgs. Cimber settled down and retired the next two, including the top "runner hitter DC Leggs to end the inning tho.

Three up, three down.

RHP Brigham has been battling some arm problems this year, only just now getting in the "rust breakers"-early season innings to knock the rust off - that the rest of the staff put in a month ago. His command is still not honed in yet, but his velocity looks great on his fastball. His slider isn't snapping off yet either, pointing to some stiffness still lingering in his arm. A mid-week start might be just what he needs to find that release point and get comfortable repeating the same delivery every time; right now his delivery is inconsistent.

OK, I want to know who scored this hit to the right-center gap an error on Caleb Brown. It was a line drive that Brown dove for, only to have it knocked out of his glove when he hit the ground. If an outfielder has to dive for a ball, gets a glove on it but just can't make the difficult play, it's a hit, not an error- Brown was not in the process of trying to take the ball out of his glove nor make any other "baseball play" besides a sideways diving catch..... Even though he should have had it, most outfielders would not even have been in position to attempt a catch on that ball.

Even though it took him awhile, Brigham put the game in the books with no hits or runs and two Roadrunners stranded. Have patience, he will be fine; Dangler is working some magic this year.