Share All sharing options for: Cal Poly Blows Over Washington In Series Opener

Since Fangraphs doesn''t think college baseball is important, well big enough to make charts and graphs for, one has to get creative. You know, actually do some research. I'm never satisfied with the box score; I want to know what happened, learn from it and add to the database. I can't take over the world until I have mastered baseball...

Baseball cannot be mastered. In the Game of Math only one player has a miniscule chance in every game to be perfect, and here is a list of how many times that has happened. Physics, nature and humanity meet at static diamond-cone ballparks, the particle accelerators of lazy Sunday afternoons. Variables abound in the balanced chaos, and rarely will the results be the same.

We have statistics & sabermetrics; records, averages, percentages and every combination of numbers conceivable with any correlation whatsoever to baseball. Yet in the end, all we are doing is recording the results; making what was once an advantage of smart and knowledgeable coaches viewable in numerical text for the masses. Not that I discount sabermetrics; I love the fact that baseball is finally starting to evolve.

Only when we incorporate exact measurements of weather conditions and human performance will we really start to understand baseball on paper like coaches, managers and players do. Projections right now are based entirely off what has already happened; the next step is to actually incorporate a particle of Future, i.e. RPI finally becoming relevant once data from the current season is injected into the formula.

In almost every memory I can recall the smell of the air, the weather, wind direction and strength; how the conditions affected the game and teammates' mindsets, what the mood of the team was that day. These are the variables you can only learn to understand from playing the game. The catcher takes part in every pitch, almost every play and is the only position to have a view of the entire game and how the ball flies. Catchers also make the best Skippers...just some food for thought.

Cal Poly Baseball is to wind, as Seattle Football is to sound. Explanation after the jump... 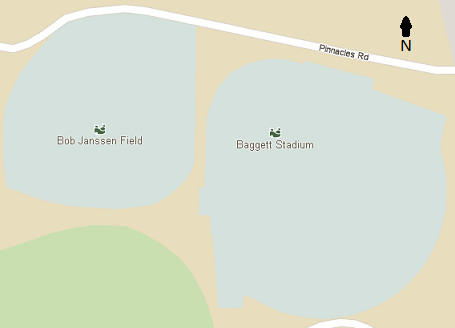 Its windy in the coastal city of San Luis Obispo, California this time of year, and the fine folks scoring errors and hits at Cal Poly know this apparently. Talk about home cookin', they knew what they were doing when they decided on the layout of Baggett Stadium; the wind almost always goes from home plate out to center (see map image above, compare to wind chart below). They are Cal Polytechnic State University after all.

Windfinder says March is the third windiest, behind May and windiest-est of 'em all April in San Luis Obispo. That's not the song I learned in grade school, and we know when the wind storms hit the Sound. Last night the Dawgs defense played like curveballs were hurling towards them. Combine that with the, how to describe it, eccentric broadcast descriptions and it is clear Loki was the puppet master, to our detriment. Damn you Loki, find some other shape to shift into shape.

Cal Poly scored 6 runs and won again. Talk about a magic number. UW lost in all phases and was doubled up perfectly: 6-3 runs, 10-5 hits, 1-2 errors. Washington only had 2 errors, but should have had 4-5. The Mustangs only needed two pitchers, with the offense not being able to generate anything after the first inning. Wagman started to tire after the 5th, losing velocity on all his pitches, but he didn't lose command and the Dawgs had no answer. Washington had a chance in the 9th until another rookie mistake on the base paths doused all hope.

The Dawgs had a very good chance to break this game wide open at the opening gun, leaving the bases loaded and scoring 2 runs. Ray lead things off with a walk, and Meggs laid down a sac-bunt, 1 out runner on 2B. Pehl singled for his only hit of the contest and Lamb walked, loading the pillows. Berry hit a little dead ball reminiscent of Ichiro perfectly down the 3B line for an RBI infield single. Anselment did his job as the LH bat and hit another RBI single through the right side, but Camporeale and Santy both struck out on 1-2 counts to end the inning. At least put the ball in the outfield guys, that really hurt...

West came out on fire again, getting a fly ball to LF and a 0-2 swinging K before going full with the third batter Haniger. Two outs, 3-2 count is not the time to hit a batter. Runner on first now instead of inning over.

Cal Poly true Freshman RF Torres can swing a bat. I came away very impressed with his performance at the plate, being the first hitter to really give West trouble this year consistently like he did. He had 5 RBI's and really did the only damage for the Mustangs. Take him out of the lineup and we win this game handily. Torres ended up a HR shy of the cycle, and hit his double here in the bottom of the first to LF on the first pitch he saw, driving in the bean job; 2-1 Dawgs.

If you want to hit Aaron West, you have to swing early and aggressive. West won't surrender walks (had none again today) and will get ahead with fastball strikes inside quickly. It might be time to start changing things up, leading off with some offspeed stuff low or outside maybe...

The Mustangs went ahead for good in the 3rd, capitalizing on the two successive Dawg errors to lead off the inning. Forgione had another throwing error to give him three on the year already, and Santy surprised with one of his own. Mustang leadoff hitter Miller is one fast kid, and he was sitting on base ready to score every time Torres came to the dish. Miller reached on the Forgione error that must have had Afenir pulling his hair out, swinging on the second pitch. Aggressiveness at the plate; it helped win the game for Cal Poly.

The next batter laid down a bunt after one pitch, but Santy muffed the throw for his one error a year and its runners on 2B and 3B before you can blink after the next batter grounded out on the first pitch he saw. Torres up next, and absolutely drills the second pitch he saw to the opposite field for a 2 RBI triple down the RF line that landed just fair. If we don't have those two throwing errors, this inning mostly likely would have been harmless. Instead, Dawgs down 3-2 for good.

In the 5th Miller caught Lamb sleeping at third and dropped a beautiful bunt down the line for another leadoff batter on base for the Mustangs. Another defensive miscue, and another run for the Mustangs. Miller is fast, but Santy can't even get the ball out of his glove on the subsequent steal attempt, no throw easy steal, runner in scoring position. West went back into his '11 form in this game earlier, going for the strikeouts and not relying upon his defense. He went to his money pitch, inside fastball, and got the batter Haniger to strike out looking afterwords. Turns out he was right this time, sadly.

The next batter is Torres the Terror again, and this is where he receives the biggest gift of the evening. My notes are not pretty for this play, and must be censored. Torres takes a ball, then hits a high fly ball, easy can of corn to shallow right-center field. All three defenders, 2B Pehl, RF Camporeale & CF Ray watched the ball fall between them (they were all 2 feet apart!) for the classic miss-communication play. Pehl supposedly called for it, which would explain Ray not going for it. Worst part? It was ruled an RBI single.....TOTAL BS. That hurts our stats and helps them far more than the right call; I don't think they wanted to decide who was at fault, so they made an easy, cop out decision that makes Cal Poly look better. 4-2 Mustangs.

I wish I had something to write about regarding the offense, but my notes are nothing but inning after inning of quick outs. Mustang pitcher Wagman had our number all night long. The Dawgs did get one more in the 7th, with Anselment and Santy pairing singles to keep hope alive. 4-3 Mustangs.

Its Miller time once again for Cal Poly in the 7th with Wright on the mound, and this is where the wind really comes into play. Ray has shown to be a great fielder with good angles and wheels so far. I cannot see how he lets not one, but two balls hit his glove and miss the catch. Hard to explain, but it happened. Miller hit the deepest drive to CF all night long for either team and Ray had it covered, reaching over his right shoulder to make the catch. It rolls to the wall, Meggs tosses it in and Miller has a triple. Without video it is hard to determine what really happened, but given the facts I have to assume it was well hit and Ray did his best. Miller scored on a sac-fly from the next batter, and in 14 games has scored 20 runs! Kid has a nose for the dish.

Next batter is another triple off Rays glove in CF. The broadcaster is beside himself with disbelief, as another out rolls to the wall. I think Ray had a cold. Or the California Bird Flu or something; ouch. Torres calmly slaps one to Lamb who has no shot to get runner at home, 6-3 Mustangs, final score.