It's been a few weeks since our last construction update and these guys aren't wasting any time. The construction crews have basically finish the demolition process, the only thing still to be torn down is the old scoreboard, which they started dismantling this week. They have finished excavating the west endzone area and are now working on excavating the area under the south stands. The amount of dirt being trucked out of the stadium is mind boggling.

With the demolition being finished, the construction process for the new stadium is well under way!! The construction teams have been busy working on the foundations of the football facilities building and the new tunnel. A special thanks to kirkd for helping me find the design schematics that were released in January, 2011. Unfortunately the schematics don't show the addition of the 30,000 square foot sports medicine facility under the south stands. I'm left to guess what changes have been made, as they progress on the excavating of the south side it should be come more clear.

Below are the usual pictures showing the current progress on the stadium, courtesy of the Husky Stadium webcams at http://oxblue.com/pro/open/huskystadium. Also included will be a few pictures of the design schematics, followed by a picture I've doctored up to help give you an idea of where the new facilities will be. Don't forget to click on the pictures to get the full size version, and as always, comments and questions are appreciated, I can't get enough discussion of the new stadium!

Picture #1 - West endzone and future football facilities building. They have poured concrete for the north half of the upper wall and are busy prepping the footings and walls for the lower foundations. At the bottom of the picture is the foundation for the new tunnel. 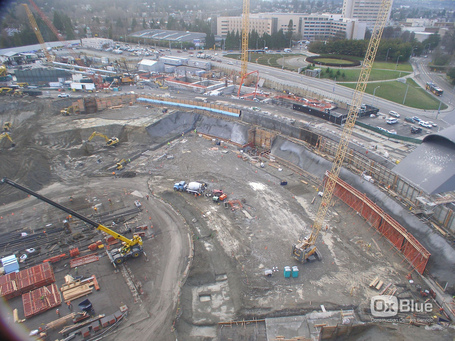 Picture #2 - Design Schematic of the football facilities building. I know the picture is upside down, it seems easier to make a mental picture when the pictures are facing the same direction. 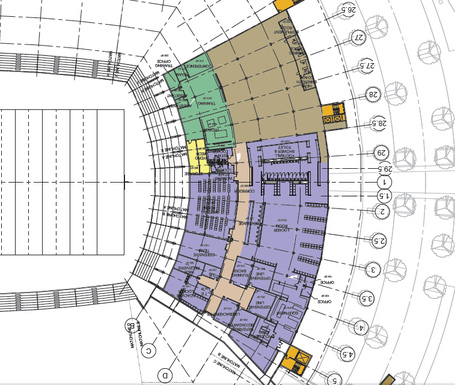 Picture #3 - A copy of picture #1 with the main areas from the design schematics drawn in. The dark blue is the locker room and team meeting rooms, the brown area is the weight room, green is the trainers area, and the white is the tunnel. The light blue is where the underground parking garage will be located. The red and purple area's are where I start guessing. My best guess (as of today) is that the purple area will be a second tunnel and the red area will be the visiting team locker rooms. The schematics don't show anything in that area, but they've excavated it down to field level which wouldn't be necessary unless they've moved things around to facilitate the sports medicine facility. 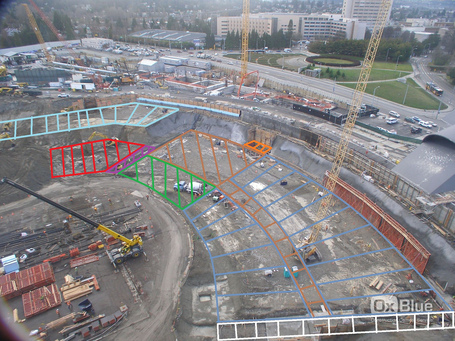 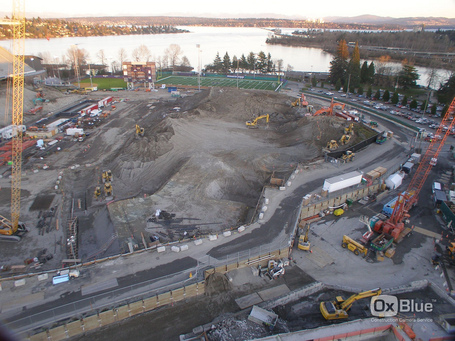 Picture #5 - Design Schematic of the underground parking garage that will sit under the south stands. 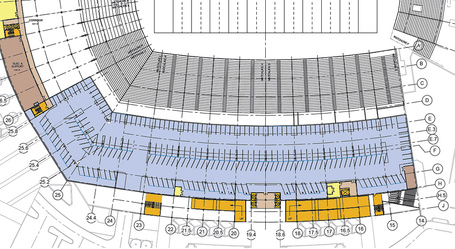 Picture #6 - Another one of my hybrid pictures attempting to combine pictures #4 & #5. The blue area is where the parking garage will be, and the brown is the weight room again. The red and purple areas are not depicted in the designs, but there is no need to dig that far down if there won't be anything there. 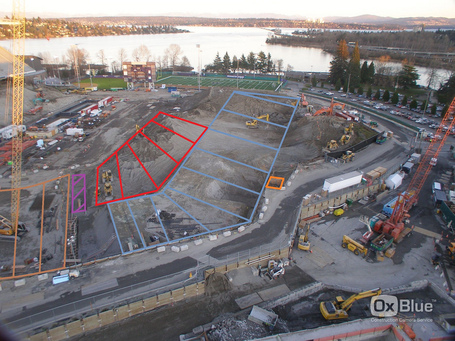