The Husky Stadium construction crews have been at work for 16 weeks now and they are getting the job done! It's amazing to see how much dirt they have moved and how quickly they are getting the foundations set for the new stadium. Below is the usual set of pictures from the Husky Stadium Webcams, with a few quick pointers on the progress at the stadium. I find it rather exciting to see how much they have already built, it won't be long before they start putting up the steel skeleton that will become Husky Stadium!

Here is a great picture showing the entire construction site from www.huskystadium.com. Don't forget to click on the images to see the full resolution image. 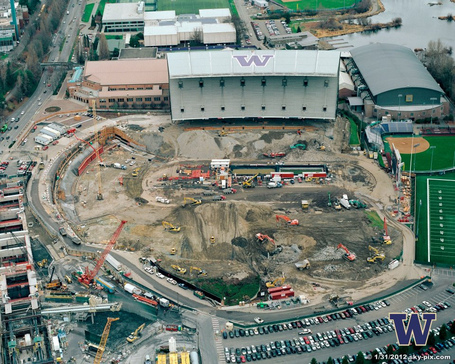 Camera 3 - February 25th: This is where most of the action is at. Footings have been poured, and a probably half of the foundation walls have been poured. There are a large portion of foundation walls that are ready for concrete, I expect to see a concrete pump running all day on Monday. At the bottom of the picture you can see that the new tunnel is taking shape rather quickly. There are two sections of wood currently built into the walls, the larger one is going to be the main doors into the Husky locker room and meeting rooms. The smaller door leads into a room that isn't on the design schematics that I have, I'm guessing it will be a supply room or something similar. If you look closely, you can see the rebar that angles up from the tunnel walls, which will give you a good idea of where the stadium seats will sit. 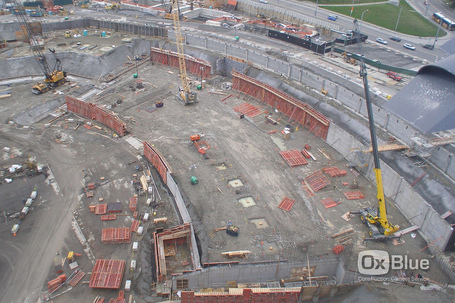 Camera #2 - February 24th: It has been great fun watching the excavating crews move further and further east, then watching the foundation crews work further east. The area under the south stands is really beginning to take shape, it's amazing to see the foundations and concrete slabs that will support the future stadium. I've been quite impressed with how precise these guys can get when digging with tractors, the lines and edges are so crisp, clean and straight. The second tunnel is now clearly visible, I'm still rather curious where exactly the visiting locker rooms and the sports medicine facility will sit. Lucky for me, things seem to be come more clear with each passing day. 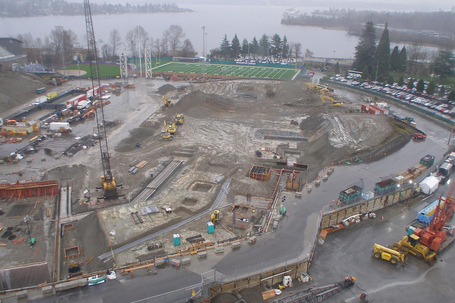 Camera 1 - January 12 - What use to be the south stands. Take a good look at how high the dirt went, then compare it to the next picture to see how much earth they have moved! 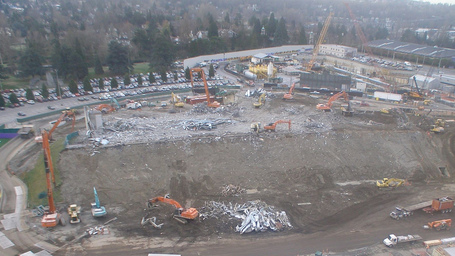 Camera 1 - February 25th: The major part of the excavation is nearing completion. Depending on which part you are looking at, they have dug down anywhere from 27' to 36' to make room for the parking garage and other underground facilities. There is still some large excavating to be done on the east (left side) end of the south stands, but you can see where they have been doing the very precise digging on the west end of the south stands as they prepare to lay the foundations. 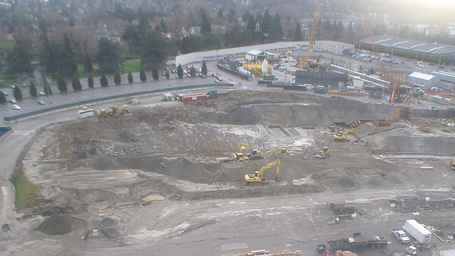 Camera Angle 1 - February 13th: This is the same area as the two pictures above it, but it's from one of the new camera's installed in early February. Again, take note of how high the dirt is on the left side of the picture and compare it with the next picture. 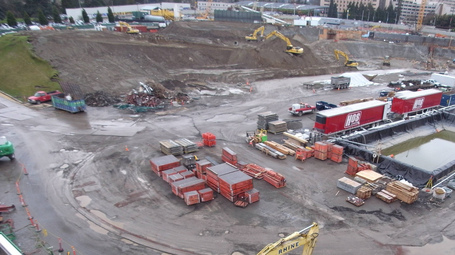 Camera Angle 1 - February 25th: A great comparison to see just how much dirt they moved in two weeks time. Most of the area under the south stands will be excavated within 8 feet of field level. I'd love to know how much dirt they've trucked out of the site! 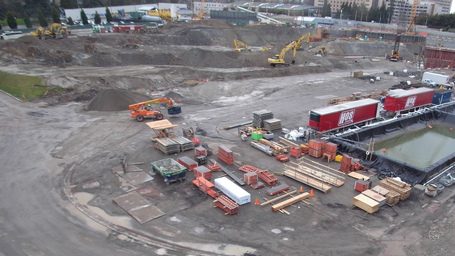