Share All sharing options for: UW 9–10 SDSU; Aztecs, Smith Get Walk-Off Win, Still Don't Get Even

--I'll post a match-up preview on Tuesday that can be a game thread if needed.


Berry tried to win it again for the Diamond Dawgs, who went into the top half of the 9th for the second consecutive game tied 8-8. He blasted an opposite field triple to the center-right wall, becoming the go-ahead run on a sacrifice fly later in the frame by RF Camporeale. Saturday the Dawgs rallied for 4 runs, while on Sunday they could only muster up one. Saturday the Aztecs only scored once in the 9th, and would have had 4 on Sunday if not for the game officially ending after the first "winning" run touches the plate.

CF Cody Smith, A Louisville Slugger All-American last year, had the two clutch hits on Sat. that tied the game back up in the 6th and 8th, only to watch his bullpen teammates help the Dawgs win just like the night before. Sunday, he got his chance to make the walk-off hit, and knowing the Dawgs couldn't respond this time, he laced a shot over short that bounced to the left-center wall with the bases loaded that would have cleared 'em. Third time's a charm, ballgame over.

The Aztecs may have exacted some small bit of revenge and uplifted down spirits, but the Dawgs took the series 2-1 and learned some big lessons along the way. Hopefully how to lose in walk-off fashion and brush it off is one of them.

Posting a 3-0 record going into Tuesday's contest against rival Seattle U at home was a best-case-scenario result of the road trip; going 2-1 in the weekend series' over the course of the season usually is a recipe for post season play. The Dawgs are right on track coming back home with 2 wins.

Starting pitcher Austin Voth set a horrible tone from the first pitch, and it cost Washington the opening series sweep. We really need to shore up a few pitching slots, and quick. Not to say we need different personnel; I think Voth is better than he showed in his first start of the season, and just needs to pitch with a little more confidence and a better handle on the different release points for all of his pitches. He only lasted 2 1/3 IP, giving up 6 H / 5 R / 2 BB. The Dawgs were down 5-1 before they had 13 plate appearances. With the way the Aztecs hitters were performing in the day game (weather played a big part in this series) this game almost looked wrapped up.

It was, to an eye accustomed to the pro game, where they actually put good pitchers in the 'pen on purpose. The bullpen is the "little league outfielder" position for college pitchers, and when you have to call in for backup in the second inning...All you can do is cross your fingers. Meggs did, and picked the right straw in FR RHP Tyler Davis, who came in to shut down the first 6 batters he faced, 4.1 IP / 2 H / 3 R / 2 BB / 6 K's, with a wicked +curve ball that was on point striking out batters, and retiring 'em 1-2-3 in the 4th and 6th innings. Yes, he gave up 3 runs, but he shouldn't have. Coach Meggs made a mistake here, and should have given Davis the hook to start the 7th. He chose to keep him in, and it cost 2 runs. Regardless, we would not have been in position to win this game at all if Davis didn't come in and completely swing the momentum. He shut the door Voth left wide open, and is the game MVP.

Nick Palewicz gave up 2 more for the Dawgs, doubling his total to 4. Only this time he did it in a save situation in the 9th to get his first loss of the season. The Skipper said he was impressed with Palewicz in the preseason, and he does have great stuff, but he has not thrown a pitch anywhere near the mid-90's Coach said he posted over the summer. Only problem is his control from an inconsistent release point, caused by bad footwork, as shown by the red and green arrows in this freeze shot. This is during Palewicz' first pitch to Cody Smith, who only needed 2 pitches to get the one he wanted and end the game. Both pitches had the same view. 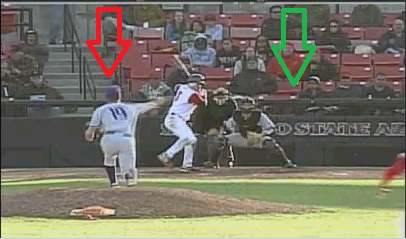 A pitcher needs to be fluid in his delivery and "falling forward" straight at home plate. His left foot is planted in a direction 30 degrees off to the left, causing his momentum to fall glove side, opening his hips earlier than his upper body can catch up to, causing a stiff arm from the rotator cuff to elbow that prohibits rotation of your forearm "up-over-around", forcing a much harder to aim side-arm delivery and minimal wrist snap. Look at his head, he is looking across his body to the catcher. This is a classic example of trying to throw as hard as possible, with so much effort your not in full control. Guess where a majority of his pitches landed? Right hand side of the plate and/or high in the zone. Guess where pitch number 2 was? Belt-high on the right side of the plate, and Smith went the other way with the hanging outside fastball for the game winning double. All from a toe point; "Toe pick!"

After getting rocked the night before, Coach Meggs wanted to boost Palewicz back up while reinforcing his belief in him, and gave him the chance to get the save and lock up the win and let Fredendall rest. It was a very risky maneuver, and it backfired horribly. Palewicz should be fine once he works the couple kinks out that I'm sure Coach Dangler has noticed.

Aztecs starting RHP TJ Kendzora, on the other hand, had the game on cruise control. He left in the 7th up 6-2 after surrendering a lead off single to Camporeale, sprinkling 4 hits / 6 K's / 1 BB but also hit 2 batters and tossed a couple wild pitches. Even with Campo scoring to give him 3 Runs allowed, his offense had doubled us up 6-3.

Only problem was, the Aztecs bullpen still hasn't received the memo that the season started on Friday. The Aztecs bullpen surrendered 6 more runs Sunday, to bring their weekend grand total to 22. Yikes. We had 15. I didn't like the way our 'pen performed at times, but we didn't average 7.3 /game, only 5...Their 'pen only has one good arm, and by finally using him for the 8th and 9th innings SDSU announced his ascension into the closer role to the world, replacing the rattled and embattled Crabb, who hasn't been the same pitcher since taking a batted ball off his head.

RHP Cederoth, the same one who dominated the Dawgs Saturday, did it again on Sunday, almost setting us down in order in the 8th with only his fastball. Even though he gave up the tying run in the 9th on a Berry triple, that hit was his only mistake. Berry made a great, effortless/smooth swing on a 4-seem fastball that stayed up in the zone on the outside half of the plate, flicking his quick wrists out and going with the pitch to the opposite field with power. I went over this yesterday, and Berry did a nice favor by providing visual representation.

This guy is gonna get more than a few saves this year for the Aztecs if he stays healthy. Great power, low-90's fastball, looked like he used a 4-seem and 2-seem to help very speeds/looks, good cutter but change-up needs work, uses his tall frame to full effect with an over-the-top delivery to create maximum downward angle and "easy" command. Stays balanced most of the time and has a strong push off the rubber, smooth windup with nice wrist action (read: speed of forearm/wrist downward snap), but he can get his upper body out of sync with the lower at times, causing him to hit right handed batters up high; he sailed one at Berry who just barely ducked in time in the 9th inning triple at-bat. Cederoth needs to develop another "out" pitch or 2, preferably a sinker/split and curve ball. With his delivery he could drop both "off the table" and become really, really nasty.

We didn't do anything offensively in the first 2 frames, and if not for an E4, the first of 4 Aztecs errors, our first 7 batters would have been retired in succession. SDSU scored 3 runs on 3 hits, on their way to 14 hits to overcome said errors.

Joe Meggs didn't get any hits on paper going 0-4, but he hit the ball hard 3 times, 1 a sac fly here to break the pair of eggs on the scoreboard next to WASH. Forgione, after his effort the 2 games before, got his first collegiate start, at SS batting in lead-off slot B, and leading off the 3rd frame. He struck out weakly his first at bat, and this AB he went down a quick 0-2 strikes. Kendzora hits him, give Erik credit for fouling a couple off to get that bean job, and Forgione is on. Ray, who is hitting .429 to start the season (second on the team to Berry - .615), then singles to right, where Aztec RF Romanski is getting his first start. He started at catcher the first 2 games. He makes an error, runners 2nd and 3rd 1 out. Meggs sac fly to score Forlione, 3-1 Aztecs.

Haynal, making his first start at catcher, hit very well today, and singled to center. 2 more singles later, and Voth is pulled for Davis the Conquistador, who proceeds to slay Aztecs quickly with bullets that go around corners, and goes down fighting right as reinforcements arrive in the 7th.

The seventh inning was long. We batted around, sending 11 to the plate. After getting shut down for so long, they were like wolves after prey once the bullpen opened. Here are my notes of the seventh, it's faster:

Campo: single through left side

Pitch Sub: Kendzora 6 hits, 6 K and gets the hook to Miller

-couldn't get runner in pickle in first game, wild pitch during intentional walk in 2nd, Haynal misses plate 3 key mistakes by Aztecs this series that have opened flood gates - commentator

=Crabb in to pitch to Berry AGAIN right after giving up HR, he wants revenge I assume; throws fastball, split, slider, but gets rocked again by the Dawgs. Has lost closer job.

Allen subbed in: hit by pitch

Spirk: RBI ground ball single up middle to make it 1 run at 8-7

=Davis gets hook for Kim

Munoz: 3-0 count, Kim needs to settle down, single hit just over the jumping glove of Ely

on 3-1, tie ballgame with first Aztec hit for Munoz

=Acker in for Kim, has over he top high/stiff arm delivery, ++curveball, needs work on RH out pitch

wicked inside curve to sit lefty Smith down looking, did job. 8-8 going into 8th.


They played an 8th frame? I don't see it on the card...O wait, there it is. Haynal crushed a triple, then disappeared, last seen near 3B. Second straight game, 8-8 going into the 9th.

Insert everything you read about the 9th inning above, here.

Next up will be the weekend notes and scouting report on the entire roster.