Hello, Dawg fans! First I'd like to wish everyone a Happy Veterans day! As most of us know, nothing in life is free, especially the freedom we enjoy here in the greatest country in the world. A big thank you to everyone who has served our country in the Armed Forces and to their families who also sacrificed greatly so they could serve. We owe you more than we could ever repay!

This past Wednesday was the one year anniversary, marking the day they broke ground on the Husky Stadium Renovation. It really is amazing how far they've come in just one year. Here is a really quick recap: First they removed the old field, tore out the lower bowl, dropped the roof, demolished the entire south side of the stadium, they dug, and dug, and dug, and dug, until there was no more dirt to move, built foundations, built walls, poured concrete floors, put up layer after layer of steel supports, built most of the Football facilities building, built the south upper deck, built the roof, put up the steel for the east stands and have started to build the lower bowl. Not bad for one year, huh! The next few months will see the south lower bowl take shape, the continued pouring of concrete risers, more digging down of the field and a lot of unknown work on the interior of the stadium.

There are some new pictures to check out at Husky Stadium's Whosay.com website. There isn't anything you haven't see before, but they do a great job showing the size and scale of the work being done. Below is the usual set of pictures, arrows and descriptions. I'm sure you know by now, but just in case, keep an eye on the web cams for yourself! Or, check out all sorts of information at www.huskystadium.com. But, before we get started, I have an anniversary present for all our Dawg Pound faithful. Here is the first time lapse video since the upper deck went into place: 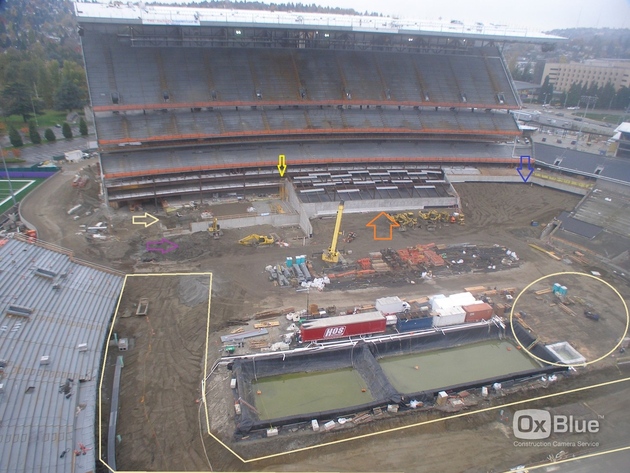 As you can see, there is quite a bit going on! The tan lines show where they have dug down to the new field level, the tan circle was filled with construction equipment on Friday, which leads me to think it's the next area to lose 4 to 5 feet of dirt. The blue arrow (SW corner) is where all the dirt is being moved to, they just started covering the mini tunnel with dirt. The orange arrow is the now mostly finished exterior of the sports medicine facility. The Tan arrow is where the visiting locker rooms will be at the same level as the rest of the lower level, and the purple arrow right below it is where the visiting locker rooms will be down at field level 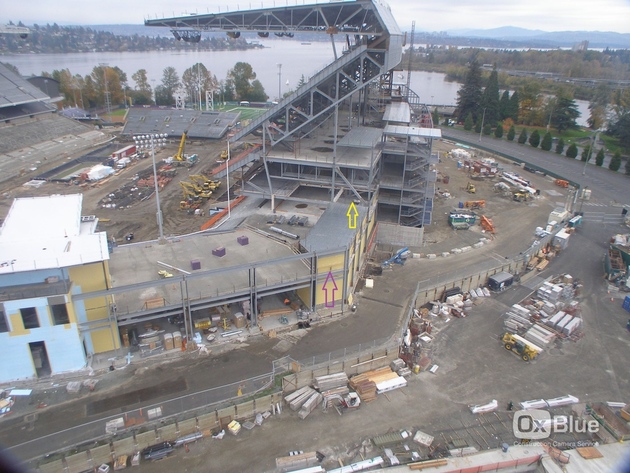 Most of the work in this area has moved inside. The purple arrow is where they have started putting the skin of the building up on the upper level. The yellow arrow is pointing to another area where they are building interior walls (you'll have to click on the picture and have good eyes to see it). 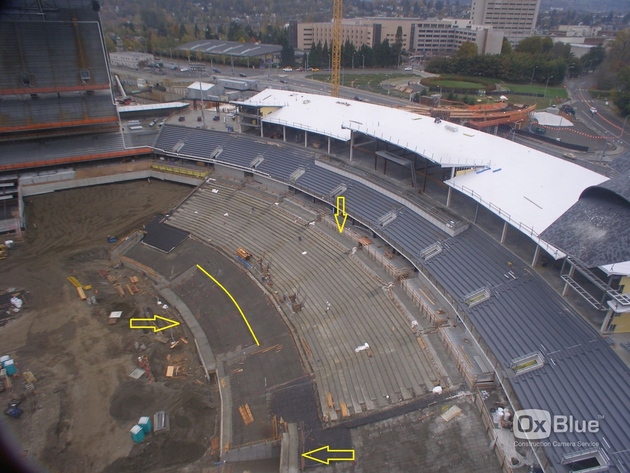 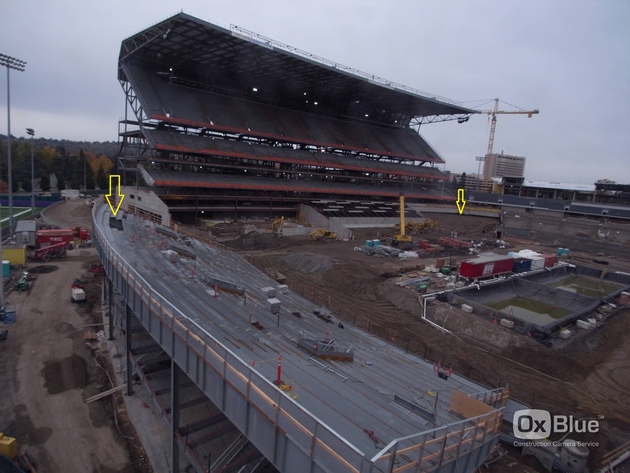 A great view of the east stands and the work being done under the future south lower bowl. You can see where the back filling of the SW corner has progressed above the mini tunnel (arrow on the right). You can also see the one little section of the east stands that haven't been finished (arrow on the left). I made a call to Scott Woodward to ask why it hadn't been finished. He commented off the record that some guy with the last name "Mojo", welched on a million dollar gift. They are currently trying to find an additional donor so they can complete the east stands. 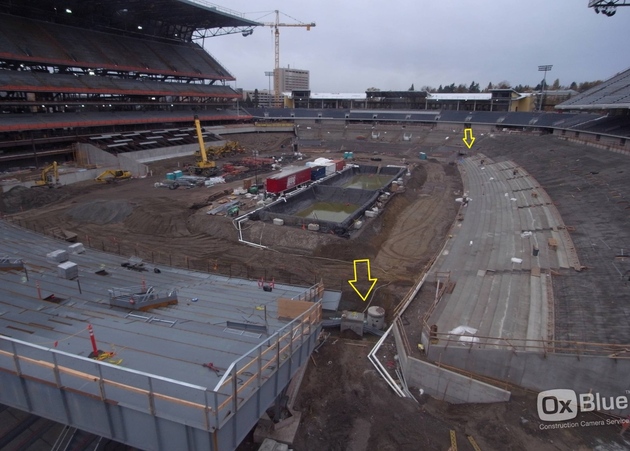 I don't know about you, but the future view of the stadium isn't looking nearly as fuzzy as it was a few weeks ago! By the time the next update comes out in two weeks, a very good portion of the lower bowl should have basically taken it's final shape (just needing concrete risers and such). The upper arrow is pointing to the area where they just started pouring concrete risers above the tunnel. It should be fun to see that corner take shape and connect the north lower bowl to the west lower bowl. The lower yellow arrow is pointing to where they have installed some rather large drainage and electrical equipment. They might not look big, but when a worker is standing next to them, they seem to be about 6-7 feet tall. 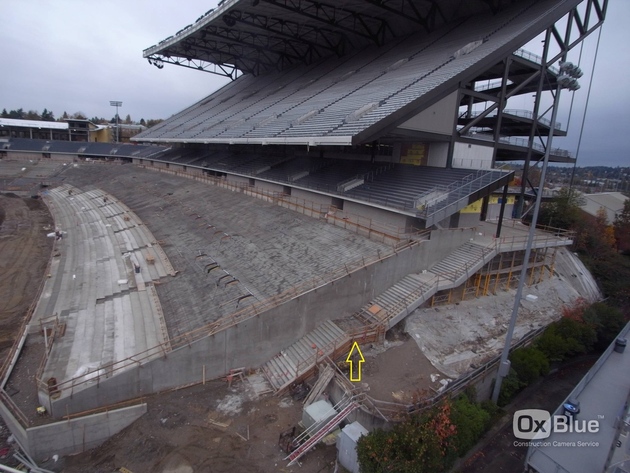 The stair case on the east side is really taking shape, there is only one level section left that needs to be completed (yellow arrow), then any ramps or stairs to connect the staircase to the lower bowl and field level. If you look at the east side of the Don James center, you can see where they have patched up the whole in the wall that was created early in the construction process.

That's it for this week, I can't wait till they release some pictures of the interior work, I can only imagine how much is getting accomplished that we don't know about. Check back in two weeks for the post Thanksgiving, post Apple Cup update.