Husky Stadium Update - Kicking Off The Second Half

Husky Stadium Update - Kicking Off The Second Half

Share All sharing options for: Husky Stadium Update - Kicking Off The Second Half

Hello, Dawg fans! It's been a wild week for the Dawg Pound Nation. This has been a week of new chapters; first our founder, the Dawgfather of the Dawg Pound hangs them up. Then, the Stadium Construction Crews hit the halftime mark of the construction process. That's right, this week marked the halfway point in the renovation of Husky Stadium; you can see Sark's halftime speech to the construction crews here.

I'd like to thank the Dawg Pound members that have been emailing me pictures and links to pictures of the stadium construction. One of our readers sent me this flickr link, which includes 150 pictures from a private tour of Husky Stadium. These are, by far, the best pictures from INSIDE Husky Stadium! I'd also like to thank Regant Denali for passing on quite a few of his own pictures; every picture you see in this update that isn't a webcam picture came from Regant Denali.

The last bit of business to take care of before getting on with the update: As I mentioned, this week has been a week of new chapters, I will also be entering a new chapter here at the Dawg Pound. With John's departure from the blog, combined with other factors, I've decided to take a step back as a contributor at the Dawg Pound. I was rather close to hanging it up all together, despite objections from John, Gekko, Kirk, and Ben. It wasn't until I saw Sark's video linked above and his comment's about finishing that inspired me to stick it out and complete the Stadium Update series. That being said, the Husky Stadium Updates will now be my only focus at the Dawg Pound, it's too unique of an event to leave unfinished. Now, let's get on with the update! 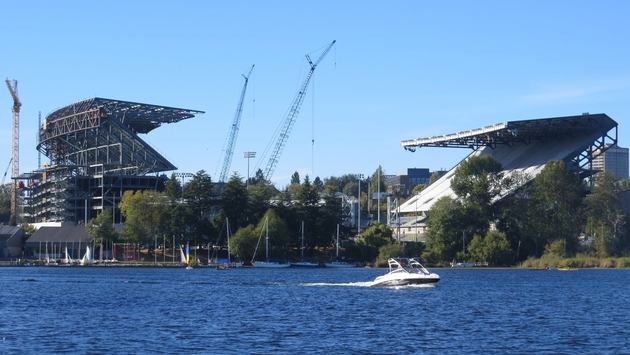 This is a picture from Regent Denali, it IS the reason why Husky Stadium is HUSKY STADIUM. This picture will now be the face of all future stadium updates! 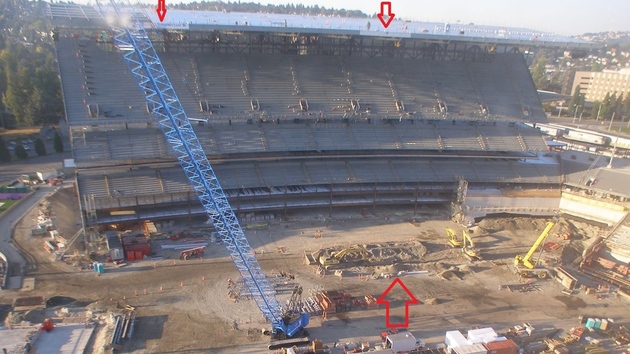 Yes sir, the steel erection of the south stands is complete!! Well, 99% complete. There is still some small sections left that will form part of the south lower bowl. The lower red arrow is pointing to where they've begun working near the front edge of the south lower bowl, the next chapter of the construction process. The upper arrow on the right points to the steel beam that has a purple W and a whole lot of signatures on it, including Coach Sark's. The upper arrow on the left points to the steel beam shown in the next picture. 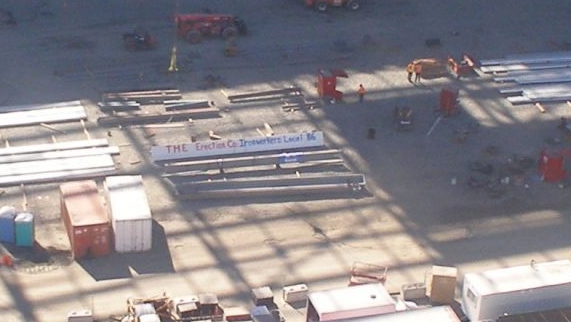 Here is a picture of the beam before it is lifted in place and the easiest picture to read it. A big tip of the hat to THE Erection Co. and all of the ironworkers who put together our beloved Husky Stadium. You guys did a fabulous job, in lightning fast speed. It was an incredible experience getting to watch you do your job! 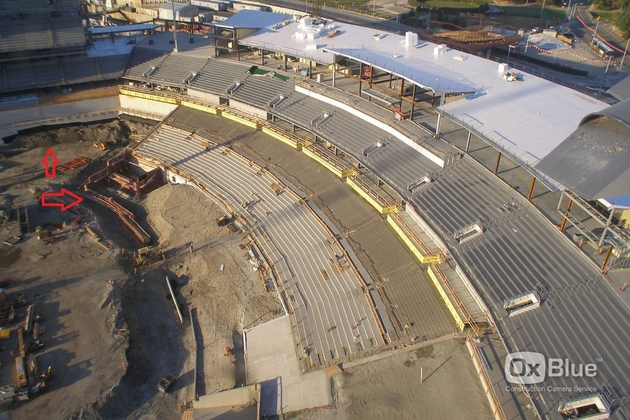 The west endzone stands are really starting to take shape. The larger arrow is pointing to the south end of the west bowl, now you can get a real sense of what the west bowl will look like when finished. They should be pouring concrete Monday morning, then working on the roof of the mini tunnel and that smaller room later in the week. After that they'll continue back filling the lower section of the lower bowl and will be able to pour the lower area of the concrete risers. 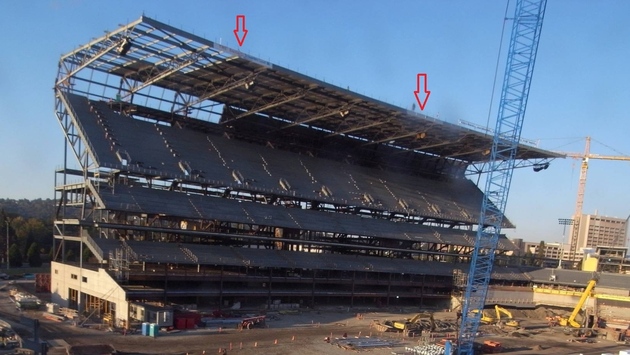 The roof is in place! The only thing they have left is a little over one section of the corrugated metal to add to the top of the roof and three more sections of the "backsplash" area. The red arrows are pointing to the commemorative steel beams mentioned above. 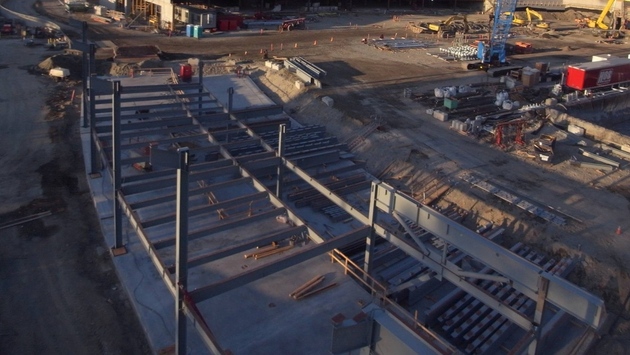 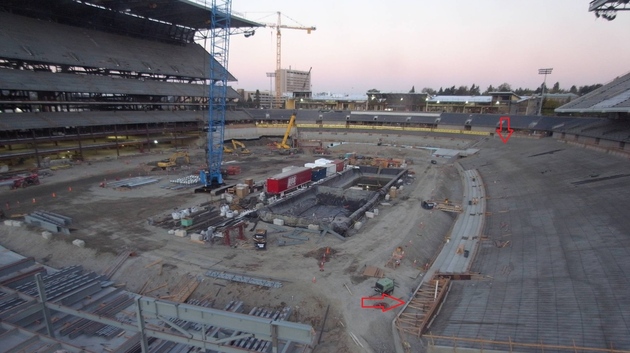 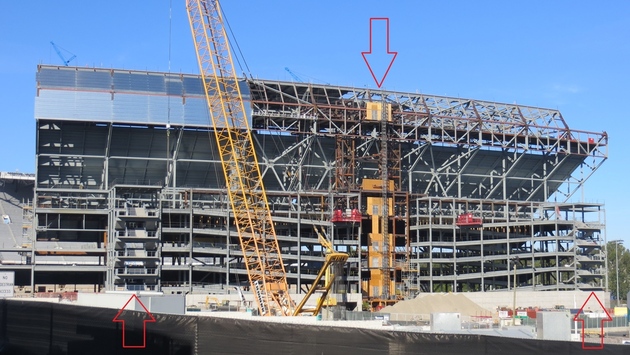 Here is a great view of the backside of the south stands, courtesy of Regent Denali. The upper arrow is pointing at the area that will become the elevator shaft leading from the bottom floor, all the way up to the press boxes. The lower arrows are pointing to the staircases at the of the stadium ramps. You'll have your choice, ramps or stairs? Knowing my high school track coach, it would be run up the stairs and down the ramps. Repeat until he is happy! 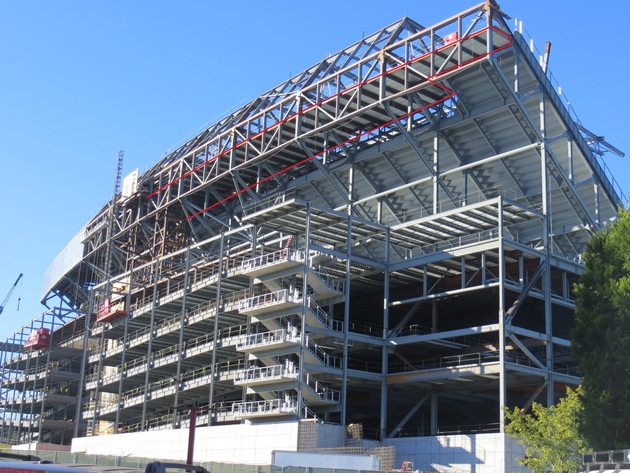 Here is a great view of the SE corner and the SE staircase. The red lines outline the floor of the press boxes, which will extend across the entire upper deck. 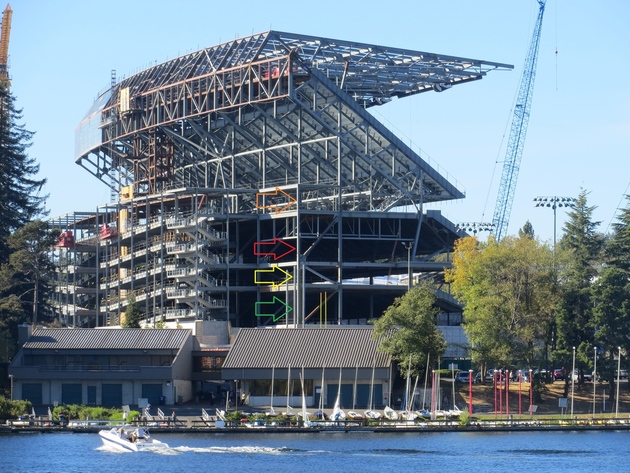 Another great view courtesy of Regent Denali. The Orange arrow is pointing at the upper concourse. The red arrow is the luxury suite level, the yellow arrow is the Club Husky level and the green arrow will be the main concourse. 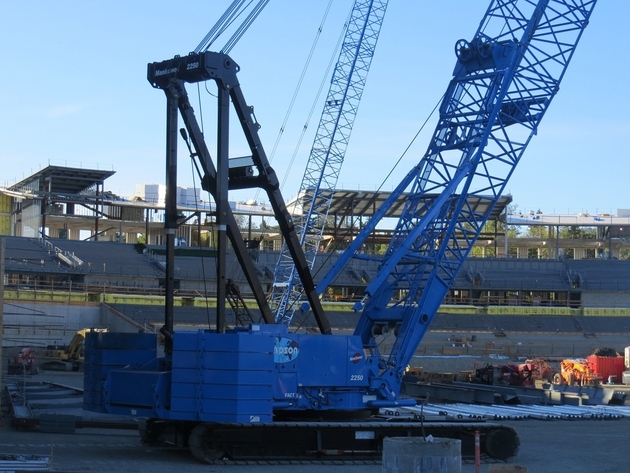 I'll wrap up this week's update with another salute to the Ironworkers who did such an awesome job of assembling Husky Stadium. This is a close up of the big blue crane that was brought in to build the south upper deck and roof. Big Blue: the war daddy of the construction equipment! GO DAWGS!!!