Hello, Dawg fans! This week's update is in honor of our Bi-Polar football team; they knock off top 10 teams at home, but get humiliated on the road. Sounds like a Cougar joke I know: What do Cougars and possum's have in common? They play dead at home and get killed on the road!! The good news is that we have SEVEN home games next season, all of which will be in the brand new Husky Stadium!

The construction progress is forging on through the rain and wind that is rather typical for this time of the year. Although it has created more work, it doesn't seem to be slowing down the construction crews. Now that the steel work is mostly complete, the amount of visual change from week to week has fallen off and the weekly stadium updates will officially become bi-weekly updates. I was meaning to get this update out much earlier today, but for some weird reason, my employer has decided that I actually need to fly on occasion! What is the world coming to!!!

On to the update! As usual, be sure to click on the pictures to see the full resolution images, which will be rather helpful on the pictures I've added some details to. Don't forget you can always keep an eye on the Oxblue Web Cams yourself, or visit the Husky Stadium website for all the fun details of the construction process. If you are a web cam addict, like myself, I highly recommend the Oxblue Web Cam app for iPhones. I recently purchased my first iPhone and absolutely love being able to check the web cams anywhere I have a cell signal! 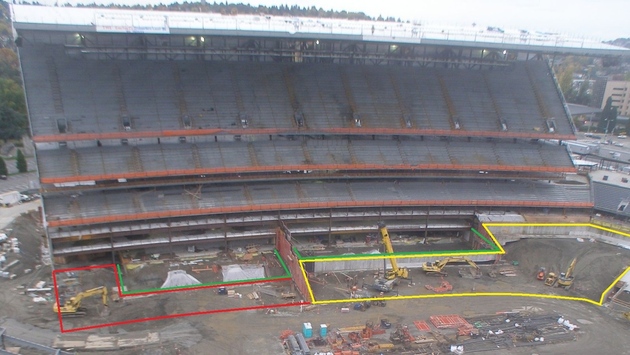 The most visual changes are taking place around the south lower bowl. They have finished building the outer wall of the sports medicine facility (green lines on the right side), and have started digging down to build the visiting team locker rooms on the east end of the south stands (left side of the picture, red lines). This is a little different than what I mentioned in the update two weeks ago. From the plans I have (20 months old) the back fill area was going to reach all the way to the east end of the stadium. Now that they have started digging down below the floor of the lower level, it's clear that the steel structure will continue out to the lower edge of the lower deck. I expect it to have the same steel structure/concrete risers make up as the west lower bowl. 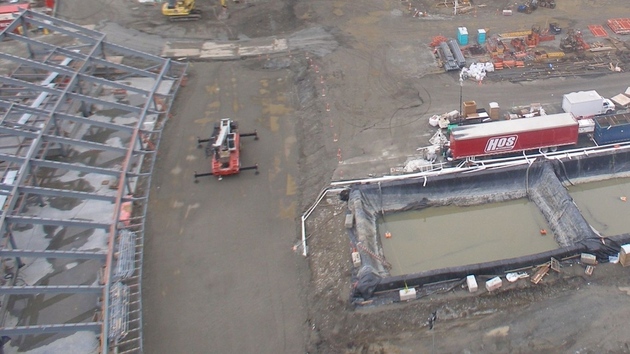 This past week saw the first signs of the new field level. After digging down several feet, putting down a barrier layer (like black visqueen), they spread a layer of topsoil (not sure exactly what type) over the area. You can see the crane sitting on that new area - the view from the other web cams really helps to show how far down they dug (4-5 feet, I think). Given they just moved that crane in front of the east stands, I'm expecting to see them start working on the metal flooring of the east stands this week. 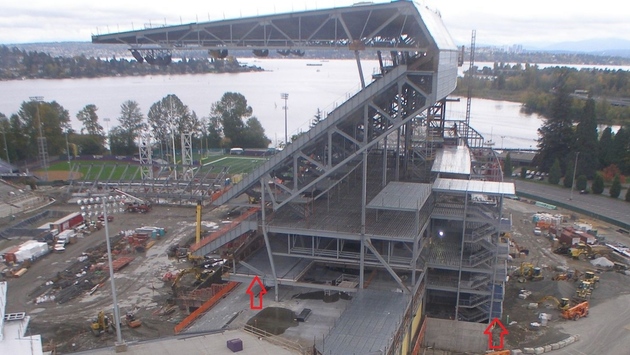 Not much has changed from this point of view, but there is still a lot of work happening. The red arrow on the left is showing where they have been pouring concrete for the Luxury Suite level. The red arrow on the right is pointing at the lower two sections of the stair well. You'll notice the lower two sections have been painted to match the middle deck that runs through the west stands. It seems like they are working their way up the south stands, both with concrete and paint. 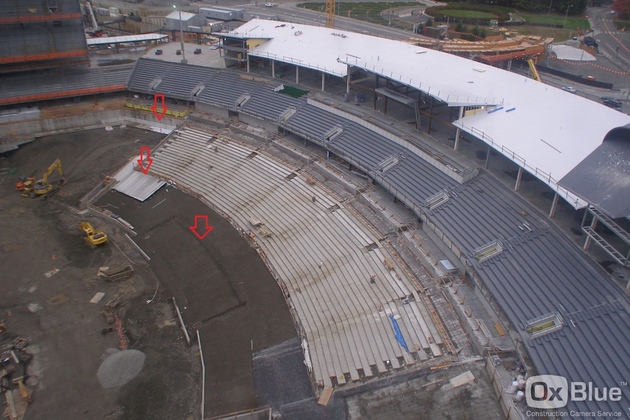 They are quickly reaching the top of the lower deck with concrete risers. It won't be much longer before they've reached the top and start working on the lower section of the bowl. The upper red arrow is showing where they have begun sealing the roof of the mini tunnel and up the wall, meaning more dirt is on the way. The middle arrow is pointing at the now complete roof the mini tunnel and adjacent room. The lower arrow is pointing to the lines in ground, which just happens to be right about where the Husky Marching band section will be. 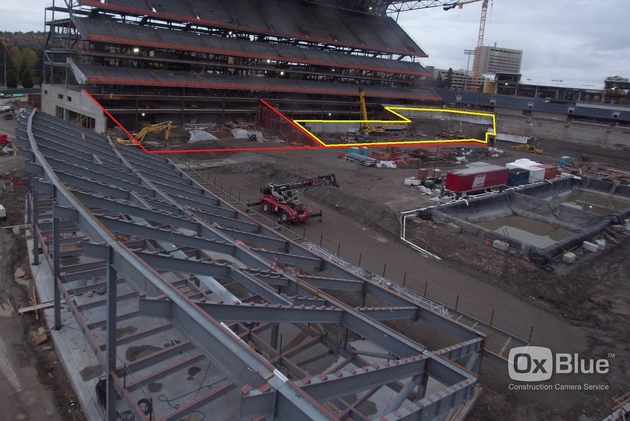 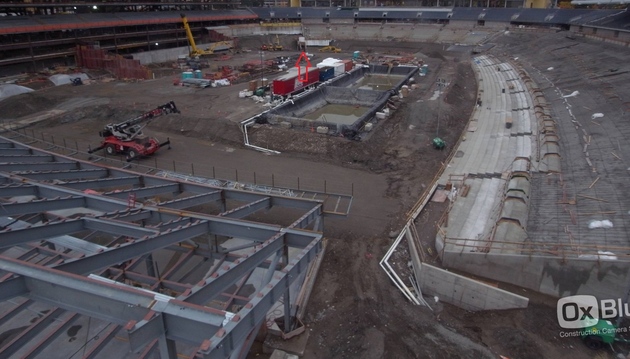 The concrete risers of the north lower bowl continue to move up hill. Now that the rain has returned, they cover the concrete for several hours after it has been poured. The red arrow is pointing to the now complete mini tunnel on the south west corner of the stadium. 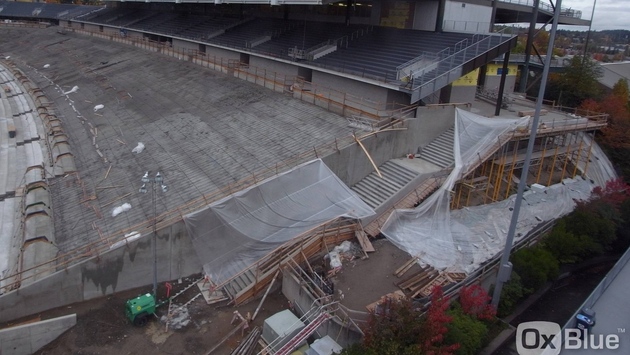 It was awfully nice of the wind to blow the plastic off of the east staircase, giving us a good look at their progress. The upper two sections appear to be complete and they are now working on the lowest section. This is also a good view to see some of the painting that is going on. The metal floor appears to be a dark grey color, the stairwells to the main concourse are being painted a white color, and the outer surfaces of the stadium also appear to be dark grey.

That's it for this week's update. I'll have another one for you in two weeks. If things go as planned, I should have a good time lapse video to add to it!