Mid Week Debate - Why Do Oregon Fans Envy Husky Fans So Much?

Mid Week Debate - Why Do Oregon Fans Envy Husky Fans So Much?

Share All sharing options for: Mid Week Debate - Why Do Oregon Fans Envy Husky Fans So Much?

Last Week's Results: The short version - Just about all of us were wrong! Sometimes it is GREAT to be wrong!!! 28% of us thought Stanford would win big, 25% of us thought Stanford would embarrass us, and only 22% thought we would win a close game. I tip my hat to the 22%, I'm not sure if you are a bunch of homers or are just football experts, but this week you called it! GO DAWGS!!!!!

This week's debate: On to our list! Here is a collection of reasons why I think Oregon fans hate us so much. It's up to you the great Dawg Pound faithful to decide if it's any of these reasons or all of them combined. Let's hear it Dawg fans, outside of being the greatest fanbase, why do Oregon fans get riled up by us so much?

Husky Stadium > Autzen Stadium: Yep, there is no denying it, our stadium is bigger and MUCH better. Oregon fans will tell you size doesn't matter, of course they would, that's all they hear from their girlfriends! Oregon fans will claim they can make as much noise as we can, they are wrong. We have PROOF that we can create 133.6 decibels WITHOUT the aid of any noise makers. Not to mention our stadium is on a lake with the most beautiful mountain off in the distance. Autzen Stadium is a zoo, it has a bunch of stinky animals that pick their butts and then eat it.

Washington > Oregon: I could go on and on and on about how Washington is better than Oregon, but why waste my time, you'd be a fool to think anything else. Microsoft + Boeing + Amazon + Starbucks + an NFL franchise + a MLB franschise, + Lake Chelan, + the San Juan Island >>>>>> Mt. Hood + Crater Lake + Nike. End of Story.

Seattle > Eugene: This isn't even a competition, unless you like to smoke pot Seattle is far greater than Eugene is every way possible. Eugene is so bad, most Oregon fans will try to compare Seattle to Portland instead. We have Lake Washington, Lake Union, Lake Sammamish, the Puget Sound, the Space Needle, Pike Place Market, the Waterfront, Elliot Bay, SafeCo Field, Century Link Field, we even need two major airports within 5 nautical miles of each other. They have weed. When was the last time a TV show or movie was based in Eugene??

UW > UO: It's not even a debate, check any university rankings ANYWHERE. Our academics are better, our city is better, and our campus is one of the most beautiful in the world.

2 National Championships > ZERO: We have two national titles (and a third #1 ranking), they have ZERO. If they EVER win one, they are going to have to redo everything, including their school logo! Their stadium is an eternal reminder of how many national titles they hold: 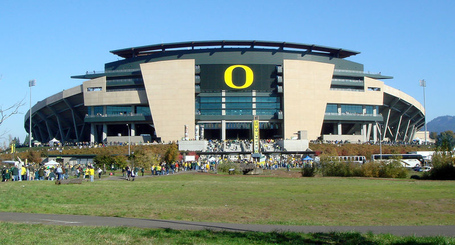 Purple and Gold > Marijuana Green and Highlighter Yellow: We are proud of our school colors, they are the color of royalty. They are embarrassed to the point of using as much black, grey, silver and white as possible so they don't have to see their school colors any more than absolutely necessary.

I could go on and on, but my unlike Oregon fans, I have a job and a life, so I've got other things to do today. Let's hear it Dawg fans, why, even in the midst of this record winning streak, do they envy us so much???