Hello, Dawg Fans! Sorry for the delayed Stadium update, unfortunately life (or work) can occasionally get in the way of one's hobby. As a pilot, October is the month when I can expect my job to require more work to accomplish the same task. Once the weather starts to head south more planning, preparation and time are required to do the work that used to be quite painless during the summer months. The same holds true for the construction teams working at Husky Stadium.

Now that the rain has returned the progress is going to be slower, especially when it comes to pouring the concrete risers for the lower bowl. You'll see in a few of the pictures that they will be putting plastic over the areas where they are pouring the concrete, mainly to keep the surface of the concrete looking nice and smooth. What used to be quick and straight forward, will now take extra time, some extra planning, and a lot of extra work to get the job done. That's not necessarily a bad thing; it's not great, but having the sunny weather for as long as we did had to help a tremendous amount. This week also saw the removal of the other big blue crane. I'm a little sad to see them go. It was great fun watching the ironworkers do their job!

As I have been mentioning, the visual progress will be slowing down very soon. With that in mind, one of these weeks I'll start going to a bi-weekly update, instead of the usual weekly update. That week might be next week, but I won't know for sure until I see how much the construction crews get done. I might even try a mini update, but only time will tell. Don't forget to click on the pictures to see the full resolution images, especially on the images that I've added details to. I'll mention it, even though I'm sure you all know well enough by now, you can always keep an eye on the Oxblue Web Cams for yourself! Or visit the Husky Stadium website to see more details; I especially enjoy comparing the web cams to the Virtual Venue at the Husky Stadium website. 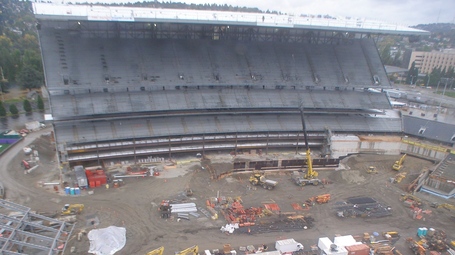 Now that the steel structure for the upper deck and roof are complete, the construction crews have begun working on the south lower bowl. They have really picked up the pace on back filling the south west corner of the stadium - the dirt is almost up to the top of the mini tunnel that it will eventually cover. You can also see where they have begun building the forward most wall of the sports medicine facility. I've taken this picture and added some details to help show how the south lower bowl will be constructed. 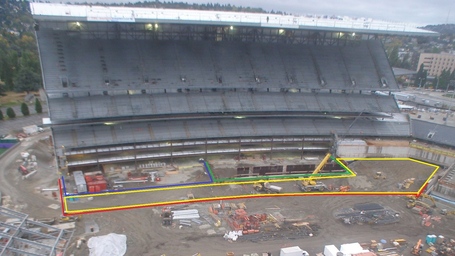 The red lines show the lower edge of the south lower bowl. Notice that the red line is actually a decent distance from the front wall of the sports medicine facility (the green lines). The blue lines show where the visiting team locker rooms will be. The yellow area is going to be back filled and then the concrete risers will be poured on top of the ground, just like the entirety of the north lower bowl. 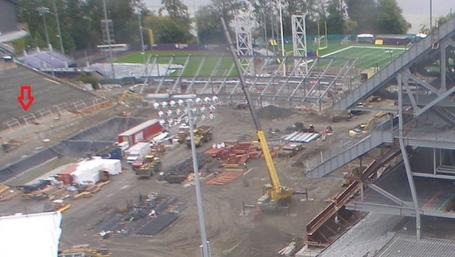 Not much has changed from this view, unless you zoom in and get a good look at the new east stands. As I mentioned last week, it didn't take long at all to get the steel in place for the east stands. That being said, it doesn't look like they are in much of a hurry to begin working on the flooring and walls. Which is understandable, they have almost a whole year to complete that section! 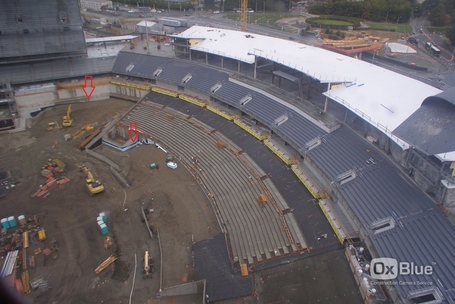 The work on the concrete risers continues, although as I mentioned above, I expect the progress to slow now that the rain has returned. The arrow on the left is pointing to the southwest corner that is being back filled with dirt. It's up to the top of the mini tunnel, which I expect will be covered with the GeoFoam that is sitting near the middle of the field. The other arrow is pointing to where they are preparing the concrete to be covered with dirt as they begin to back fill the lower section of the west bowl. I still find this view rather deceiving with the concrete risers starting 35% of the way up the lower bowl. Once they pour all of the concrete risers, this section is going to seem MUCH, MUCH bigger. 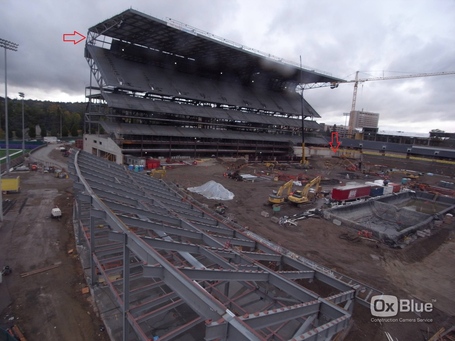 A great view of the east stands, with the new south stands in the background. The upper arrow is pointing at the last section of "backsplash" that needs to be added to complete the roof. The lower arrow is pointing at the southwest corner that is being back filled. If you zoom in on the full resolution image, you can get a good idea of exactly how much dirt has already been added to that area. If you can use your imagination, you can see how much more dirt is going to be need to finish back filling that area: it's A LOT. 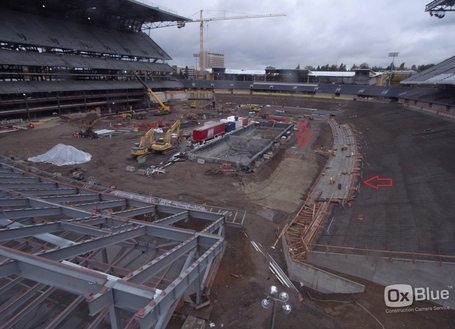 When these new web cam angles were added a few months into the construction progress, there wasn't much to see. Funny how things change! The red arrow pointing down is showing where they have begun taking the field area down to the new field level (approximately four feet). The other red arrow is pointing at the supports that have started going up around the north lower bowl. They will be covered with plastic to create a shell over the concrete risers as they pour the concrete and finish the surface of each row. Looks like a LOT of work. Welcome to Seattle, right!?!? 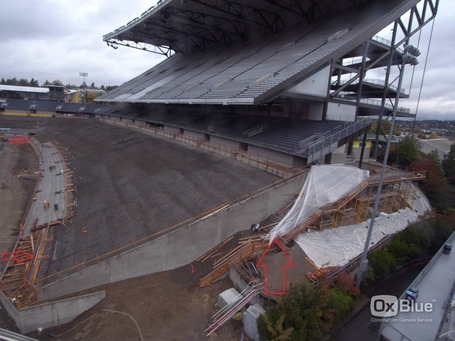 The final picture of the update (as usual). The two red arrows on the left side of the picture are pointing to the areas where they have just started pouring concrete risers. Now they will be able to pour concrete along the entire length of the lower bowl. The upward pointing arrow is showing where they have started pouring the concrete steps on the east side of the lower bowl. You can also see where they had put plastic in place to cover the concrete as they poured the steps.

That's it for this week Dawg fans; depending on the amount of visual change, there might not be an update next week. If there isn't, I'll be sure to get one up every other week. GO DAWGS!!!