Harry Husky and His 12-Pac: The End Edition

Share All sharing options for: Harry Husky and His 12-Pac: The End Edition 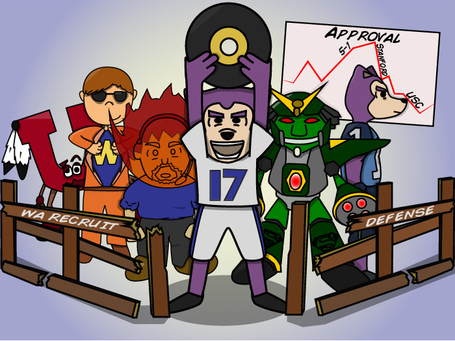 And just like that, the 2011 College Football season was over.
The book on the 2011 Washington Huskies has officially been closed. The verdict? At least they replaced Jake Locker.
I was a Jake Locker mancrushlovehimwishhedidnthavetoleave fan through my college years. My years at the UW coincided with that of Jake and I thoroughly enjoyed watching him through 4 years. So after the two of us (you know, Jake and I, best friends) graduated from the UW, I was left wondering who would lead me through the next few years of enjoying Husky Football. Then came Mr. Price.
Amid all of the stories, negative and positive, surrounding Husky football this year, none was more surprising than the emergence of quarterback Keith Price from Compton, California. He broke the season touchdown record with 33 TD passes and, more importantly, solidified his leadership in the hearts of not only his teammates, but also Husky football fans. While we have not hesitated to criticize Keith at times, I think as a whole, Husky nation has been blown away by this kid.
An explanation of the above picture after the jump!
So that's my biggest story of the year. What's yours?
Others I considered as candidates:
1. The firing of Nick Holt - Fresh in our minds are the 67 points scored on us with ease by the Baylor offense. I am still not sure how to feel about Nick Holt, but am looking forward to what the future with Justin Wilcox brings.
2. The subsequent hiring of Tennessee defensive coordinator Justin Wilcox - To be honest, I didn't know anything about Wilcox before his name came up in the rumor mill. But his resume is impressive. This year, LSU shut down Oregon with their supreme physical talent. On the other hand, Wilcox's Boise State Broncos outsmarted and outcoached Oregon. Remember when Tyrone said that the Nickel 3-3-5 was the solution to Oregon's spread? I think we are finally past those days with this hire.
3. Beating the Utes - Ok, this wasn't really a big story. But this was arguably the biggest win of the 2011 Husky football season. I, personally, didn't give the Huskies a chance and they blew me away. So much so, that I decided to make a comic strip about the Huskies after that. The rest is history...
4. Getting beat by RoboGunner3000 and the Baylor Bears - I still don't want to talk about this one. It hurts...
5. The departure of seniors Chris Polk, Ta'Amu, and Dennison to the NFL - Polk helped build a mentality within this Husky Football team that emphasized toughness and effort. His contributions will be missed. But hopefully, he won't be going too far away from home in April's draft...
6. The rise and fall of our expectations - It was tough seeing this team seemingly regress (or at least, fall back to earth) after such a strong start. I think for a lot of Dawg fans, the 2-5 finish has left a very bitter taste in their mouth.
Thank you all again for enjoying Harry Husky and I look forward to seeing you again down the road. Cheers!