Tweet Your Way To Houston With SB Nation and Samsung

Are you interested in going to the Final Four in Houston this year? We can show you how you can still get that accomplished. Samsung is sponsoring a contest in which fans can win a fully paid trip to Houston plus tickets to the Final Four.  To enter the contest, all fans need to do is Tweet a picture of themselves in their fan gear.

This is actually a perfect opportunity for T-90 to grab a free vacation. Check out the threads that he sports when going to Husky games! 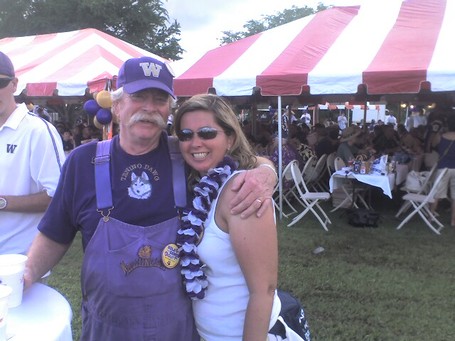 Great news from the mothership:

SB Nation has partnered with Samsung for "The Pride of March Tweetstakes." The campaign is running from March 15th through 24th, and we're asking fans to submit (via Twitpic or another similar platform) a picture of you in your best fan gear. The more you stand out, the better.

All you have to do is Tweet the picture of yourself with the hashtag #SamsungTV for a chance to win travel, tickets, and accomodations for two to the Final Four in Houston, TX. SB Nation editors will hand select and announce the winner from the contestants.

(Check out the official rules here .) Good luck, and here's to a trip to Houston!