Share All sharing options for: Venting Seven Years of the Ultimate Frustration

So is this the year that Washington finally beats Oregon?

It could be. The setting and timing is certainly right since it is the last game in old Husky Stadium. The 1991 National Championship team is going to be honored at halftime, the Dawgfather is in the house, and the seniors are all being honored so emotions should be running pretty high.

The Ducks and their fans are treating it just like any other game. Most of them aren't even old enough to remember when Washington annually pounded the Webfoots and traveled with enough fans to fill Autzen Stadium.

The Duck athletic department used to survive on the proceeds of the UW game and the Civil War because all the rest of the games were so poorly attended. I guess that is understandable since the Ducks regularly lost more than they won back in those days.

Those glory days are probably gone forever. Oregon is now the dominant program and with all the investments the school (Phil Knight) have made in the athletic infrastructure they have the ability to stay on top for a long time. If you are going to beat Oregon you need to rise up to their level because they probably aren't headed down.

Washington under Steve Sarkisian is headed in that direction. The 6-2 Huskies are bowl qualified for a second consecutive season. He already has a number of signature wins in the two and a half years he has been at Washington but real Husky football won't be officially back until he beats Oregon.

I have quite a few good friends who went to Oregon. I'm happy that they are happy about the recent success of their football team. Contrary to popular belief there actually are a handful of good people who went to that community college on the shores of the Willamette River.

I have no problem reminding them that the current all time record of the series has Washington ahead of Oregon 57-40-5. I love to discuss with them why they haven't won a Rose Bowl since 1917 and how incredibly cool it is to win a national championship as opposed to losing one on national television.

If you are a true Duck fan the facts of the past mean little because you are living in the present and the present is pretty good. In fact the present has never been better (except that possible probation thing...see below). When your history of being a competitive football program dates back only to 1994 the past is something you don't really need to focus on anyway.

The future however is a little scary for the Ducks because NCAA probation is looming right around the corner. The true Duck fan will tell you that it is utter nonsense...nothing is going to happen says the typical Quacker. Chip Kelly must believe it too because that is what he is telling his recruits (see Lane Kiffin on how to recruit well on the eve of double secret probation).

The common Duck fan will tell you that Chip was just being generous and courteous rather than simply buying players through cash payouts to Texas street agents. Chip Kelly will tell you that...(well he actually can't tell you anything because his and the UO attorney's have advised him not to speak to the media about it until the NCAA investigation is completed). 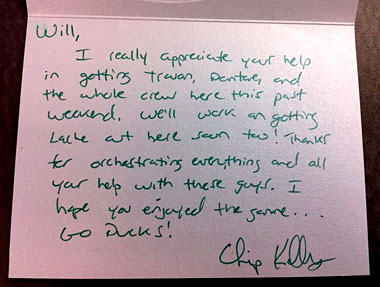 You have to admit that the man does write a pretty nice thank you note! Willie Lyles was impressed enough with it that he showed it to the writers at Yahoo and the investigators at the NCAA.

So that brings us up to this coming Saturday for the renewal of one of the nastiest and most bitter rivalries in the country. The Ducks want to pay back nearly a century of Washington arrogance and indifference by saying that is is just another game. Chip Kelly preaches it and if Chip Kelly is preaching it the Ducks fans are all lined up singing it in the choir.

The reality though is that beating Washington is much better than losing to Washington. Beating Washington badly (26.5 point average margin) as they have over the past seven years is even better. The Ducks love it as much as we hate it and no amount of phoney indifference is going to hide that over at the dens of sin like ATQ.

Washington needs to win on Saturday and make this rivalry relevant and competitive again. The Dawgs needs a signature November win to signal that the program is truly back and ready to climb to higher levels. They need to knock the Ducks out of the national title race and help prevent them from winning a third consecutive conference title.

You have to score points to beat Oregon and the Husky offense should be able to put up some serious points on the Duck defense. Chris Polk is going to be able to run on these guys and Keith Price (second start against Oregon) has a real good idea of what to expect from Oregon and how to exploit it.

Defense is the biggest key and Washington needs to figure out a way to control the line of scrimmage and take away the big play. If Washington takes away the big play I think they have a good chance to win....but there is that speed...that incredible Oregon speed...how do you handle that?

So I ask you all once again.

Is this the year that Washington finally beats Oregon?