Share All sharing options for: Harry Husky and His 12-PAC: Arizona Doubleheader!

It's the weekend.  We have World Series Baseball, a big Husky Football game, Seahawks Football, and last (and least), Sounders Playoff games!

Heading into this week, the biggest storyline around Husky Football has been the performance of the defense. Why has this defense been so bad? Yeah, the talent isn't there, we know that. But there is no reason why we should rank 100+ in the nation in so many defensive statistics.

Before I introduce today's 2-PART comic, I'd like to share a little bit about my excitement for being a part of the UW Dawg Pound.  One thing I really like about the UWDP is the friendly atmosphere and the interaction that happens between sports fans.  Not only Husky Fans, but Sports fans.  I feel like SBNation, and more specifically, UWDP, is one of the few places where it's possible to have a (semi) civilized discussion with opposing fans about the teams we love.  This is something that our hero, Harry Husky, has yet to fully experience.

Without dragging this topic on, I'd just like to say thanks to everyone who has offered feedback for the past 3 comics. I've really appreciated it and it has motivated me to continue to contribute to this community.

So here he is, everyone, Harry Husky and his 12-PAC. 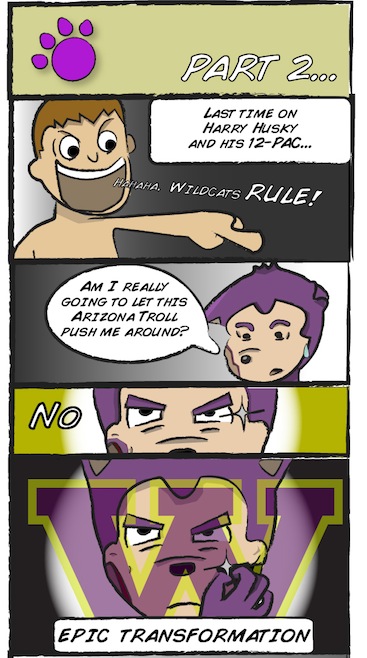 AUTHOR'S NOTE:  Harry's true identity is not Nick Holt. He simply transformed into him to use his "Fire"-power.  So you don't have to worry that Harry is going to wear grandpa glasses and talk like a chain smoker.

ALSO:  Sorry if the puns and wordplays made your head explode.