I don't think anyone anticipated last nights 48-12 butt whipping which was administered by Arizona to UCLA. Usually when a coach gets fired it signals the end of the season and the beginning of a coaching search. That didn't happen last night. Arizona showed up and proved that they actually cared two weeks after Mike Stoops was dismissed.

UCLA obviously did not. It wouldn't have been surprising to see Rick Neuheisel get the axe this morning but Bruins AD Dan Guerrero said late Thursday night that replacing Neuheisel after Thursday's loss isn't even a remote possibility. Maybe replacing both Dan and Rick at the end of the season is the way to go?

This is some really funny stuff from the Dawgman Fark Board....Rattlehead is a genius! 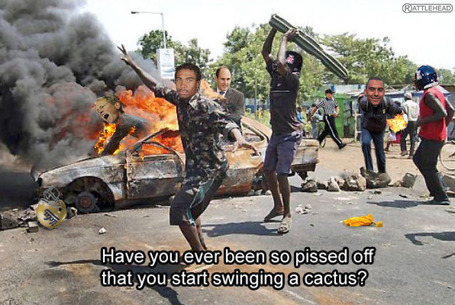