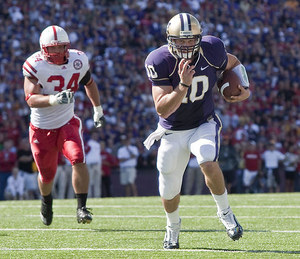 It seems everyone has something to say about Jake Locker's day vs. Nebraska. I don't. Not really. I had no intention of analyzing how he played. Originally, I had planned on starting with the O-line. But what changed my mind were some of the comments about Locker over the weekend and the past few days, many of which I thought was unfair. So without really giving my opinion, I decided to analyze him and give a blow-by-blow account of his day as it happened. This way, people will have not just the full picture, but an accurate depiction of how Locker played. They can say whatever they like about him then.

Jake Locker had a bad day. In fact, it was his worst statistical game of his collegiate career. A 4-for-20 passing day. He deserved a lot of the criticism that he received. Just not all of it. Not to make excuses for Locker or to apologize for him, the fact is, it was not only because of him that he had a bad day. It was many things. The whole offense struggled in the passing game. There were some inaccurate passes, the receivers were having considerable difficulty getting open, Locker made some questionable decisions,  he faced considerable amount of defensive pressure, and an amazing - I mean, an AMAZING set of defensive backs.

The moral? Looking at Locker's play, he did not have nearly as bad a day as people perceived him to have.

The Huskies started off their first drive quite successfully, with Polk rushing for 5 yards on first down on their 20-yard line, and Bruns getting an end around for 4 yards, setting up a favorable distance of 1 yard on 3rd down.

Huskies break the huddle with a two-TE, two WR Ace formation. The TE on the right, Marlion Barnett is lined up on the LOS with Habben.The TE on the left was behind and offset the LT.

The play was a quarterback sneak. Schaefer dominated this play. The two games prior, Schaefer struggled in run blocking against DT's who were capable of consistently getting in the backfield. Unable to achieve a consistent push against them, he at least held his point more often than not, and didn't allow them to penetrate the backfield consistently. On this play, it was Schaefer's day. He was the proverbial unstoppable force. Schaefer engaged, blew, and downed his man, Baker Steinkuhler  two yards off the LOS immediately after he snapped the ball.

What made this impressive is that Steinkuhler had actually found the the chance to root his feet, yet it did him no good. Schaefer mauled him. It wasn't as if his DT was undersized, either. Steinkuhler is 290 lbs.

Schaefer's dominance allowed the interior line to only tuck close to Schaefer and let Locker charge in two yards for the first.

What followed after three consecutive successful plays during the opening drive was an extremely dumb, dumb pass by Locker.

UW broke the huddle with a 3-WR I-formation. Nebraska is set in their 4-2-5 defensive formation.

The ball is snapped. Locker gets beautiful protection - a picture-perfect pocket, one with a big hole up the middle if Locker so chose to scramble and one that wasn't going to crumble any time soon.

It is play-action, with Locker hastily executing a fake hand off to Polk. Aguilar, who is the slot receiver, seems to be running a go route, but meets double coverage. Instead of looking to see what the coverage was on anyone else, in which case, everyone was covered, but only Aguilar was in double coverage, Locker immediately reads the LB coverage, both of who were playing QB spy, but one of them picks up Polk in his zone, and the other covering the hole that the O-line opened for Locker. Hardly a split second later, Locker targets Aguilar, and for reasons best known to him, fires to Aguilar. Only, the pass was underthrown and way off to the left where Aguilar had absolutely no chance to catch it. A bad decision and a bad throw compounds each other and results in a turnover.

The perplexing aspect about this decision is that Locker decides to take a chance against a defense that he knows that excels in taking away passing options and leaving only the tightest windows open. Being that it was a first down, the decision should have been to throw away the ball and live for another down or two.