The morning starts off with the bad news received last night that RB Deontae Cooper will undergo knee surgery to repair his ACL which was injured on Saturday night. Cooper was having a great camp and was challenging for the back up position at TB. He would have also been a fixture on special teams this year. Deontae will red shirt this season and have four remaining years of eligibility.

The rotation behind Chris Polk became noticeably thinner with only four healthy scholarship tailbacks on the roster. Johri Fogerson is the backup like last year but the coaches were carving a different type of niche for him this year which would have lined him up sometimes at FB, WR, and H-Back in addition to TB.

Demetrius Bronson who spent some time at FB this past spring is now obviously going to spend the bulk of his time providing depth at TB. Bronson who redeemed himself during the spring game still has problems protecting the ball.

Jessie Callier has looked great since stepping on campus this spring and he is my bet to assume the back up position behind Polk.

No official word on WR James Johnson's ankle injury suffered on Saturday but at the very least he will miss time this week. Cody Bruns, Jordan Polk, and Kevin Smith will get shots at working with the one's during his absence.

Bruns and Polk have both had a strong week at camp. Smith has been impressive and he brings something the later two don't have and that is size.

Austin Sefarian-Jenkins will announce where he will be going to school later today. ASJ is one of the top HS TE's in the country and will decide between UW, Florida, Texas, and UCLA. The press conference which is being held at the Gig Harbor Yacht Club is open to the public.

I continue to hear from multiple sources that Austin will pick UW today. ASJ has been spotted at three UW practices this past week after visiting Texas last weekend which is a pretty good sign.

Twenty months ago this kid had no interest at all in going to Washington. Steve Sarkisian and his staff have done an incredible job of closing the gap during his recruitment.

Dawg Pound Editor "Purple Reign" aka "Adam" was at the stadium on Sunday for picture day with his family. Here are some of his comments:

Good time down there today. I go every year and this was BY FAR the largest crowd I've seen since '02...pretty impressive, considering it was well-over 90 degrees when things started at 11:30 and it only got (much) warmer from there.

The new home jerseys look great; they're clearly several shades darker than those from last year, I bought one of the jerseys from last season during the online auction after last season, and these jerseys are much darker than the one I bought. They're going to look great on TV, but I'm almost worried that they'll show up as close to midnight blue in a night game.

Here is a shot at Jake Locker testing out his writing hand. If you wanted to spend some time with Jake the wait was estimated to be about an hour and a half. 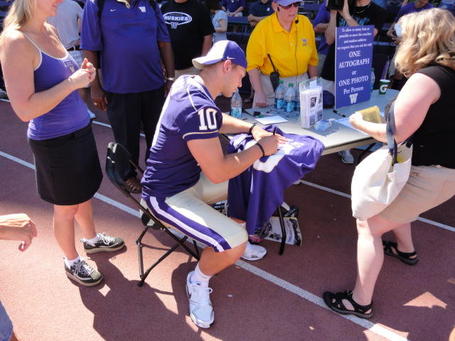 Here is a shot of Nick Montana hanging out with one of his favorite fans. Picture Day is just as big a day for the players as it is the fans. You can tell that everyone in attendance is enjoying themselves. The players always get a big kick out of this event. 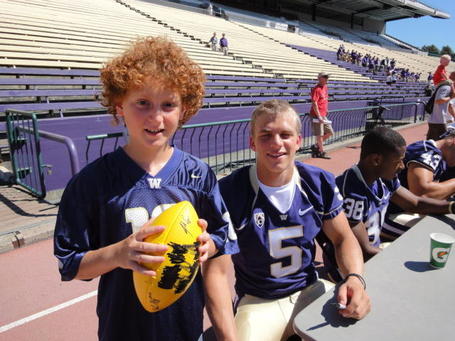 Check out the one with Potoa'e and Porter. Those kids are beasts and if you're interested in knowing if they pass the "eye test", um, yes. Potoa'e is probably about the most physically impressive guy I've seen since Donny Mateaki...I'm not a small man, and his biceps are quite literally about the size of my thighs. 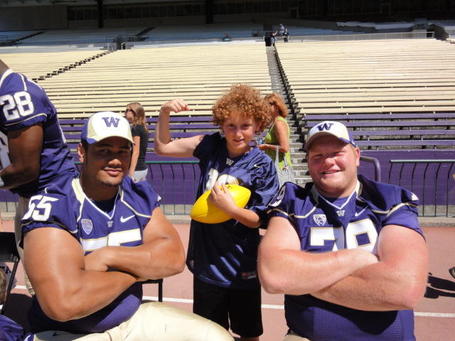