Street Agents having an impact on football recruiting

Share All sharing options for: Street Agents having an impact on football recruiting

One of the biggest challenges going on in college recruiting is the emergence of what are called street agents. A high school coach or a so called longtime friend of the family takes on an advisory/father figure type role in helping to decide where the PSA is going to go to college.

At first glance it doesn't seem like a bad thing to have this type of advisor hanging around especially if you are a single mother trying to raise a family. The relationship usually starts early in junior high school. The street agent spots the talented PSA and develops a relationship with him and his family.  Gifts such as athletic equipment, meals, travel, and event tickets are all part of the mentoring/investment in developing the PSA.

Once the recruiting process starts the agent is involved in negotiating which schools the player will go to camp at, unofficially visit, officially visit, and finally commit to. Once again at first glance it doesn't sound like a bad deal for the PSA because he is taking advice and getting support from someone who is familiar with the process, understands that it is a business, and is supposedly looking out for the welfare of the PSA.

In some cases this is all on the level, and the best interests of the PSA, and his family are protected. In many cases though the street agent gets paid every step of the way by individuals associated with the schools the PSA and the agent have interest in. Going rates at some places are rumored to be $3000 for a camp visit. $12,000 for a commitment, and $36,000 or more for the signature on letter of intent day.

Paying money for a player to go to your school isn't exactly a new practice. Just for example Hall of Famer Hugh McElhenny once remarked that he took a pay cut when he graduated from the University of Washington and entered the NFL. Bidding wars between schools for players were common back in those days. QB Bobby Cox actually left Washington to transfer to Minnesota because he simply was offered a larger financial package to play there.

Under the table slush funds have been prevalent in the game since its inception. The old PCC the forerunner of the PAc 12 dissolved in the late 1950's because of it. The street agent however is a newer part of the puzzle because the money typically goes to him and not the PSA and his family.

The street agent is the middle man in the entire process. Some of the bigger one's out there run it like a legitimate business under the cover of a recruiting consulting service, skills camp, or a non profit foundation to support inner city youth. By setting up the business that way they can receive payments/donations from interested parties/boosters and it looks like a legitimate transaction with no direct linkage between the program and recruit.

Up until recently most street agent activity in recruiting was centered around college basketball. AAU coaches seemed to be the biggest culprits in the process. They were around the kids for most of their young lives and in a lot of cases brokered where they were going to attend college. Shoe money is always rumored to be a big part of the process.

Football was a tougher nut to crack for the street agent but it has become a very prevalent part of the recruiting equation in the Southeast and it is beginning to spread across country. Texas, particularly the Houston area is a hot bed for street agents. Ever wonder how a top rated kid from the Houston area spurns the University of Texas, the Big 12, and the SEC to head 2000 miles to the Northwest to go to school? Typically that is the work of a street agent.

The recruitment of LaMichael James (Texarkana), Lache Seastrunk (Temple), and now LB Anthony Wallace (Dallas) by the University of Oregon from the state of Texas has raised more than a few eyebrows as of late. Wallace recently chose Oregon over 40 other offers including virtually every premier program in the nation.

Will Lyles and Baron Flenory are the top street agents in Texas. Lyles is more established and works out of Houston while Flenory is newer to the game and works out of Dallas. Both have been allegedly brokering deals sending players to the SEC, Big 12, and out to the West Coast to play for schools like USC and Oregon. With USC on double secret probation because of recruiting improprieties Oregon allegedly has become the biggest beneficiary of the street agent system on the West Coast.

Flenory is a former employee of Scout who now runs a series of skills camps for college football players. One interesting footnote about Baron Flenory is that he played football at the University of New Hampshire for a guy named Chip Kelly who now happens to be the head coach at the University of Oregon. Flenory was supposedly instrumental in Oregon's successful recruitment of Anthony Wallace. Judging from the picture below (Flenory is on the right) he has a pretty good relationship with the Oregon coaching staff past and present.

Lyles has been at the game a lot longer than Flenory. Here s a photo of him taken with former USC head coach Pete Carroll. Lache Seastrunk was one of his clients and it seemed like he was a lock to go to USC until switching gears to head to Oregon once rumors leaked that the Trojans were going to be penalized severely in the spring. 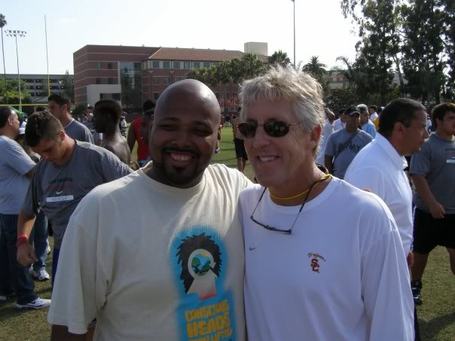 Is Oregon doing something wrong or are they getting top national recruits because they earned it by their performance on the playing field? A good argument can be made either way and I am not going to tell you that Oregon is paying middlemen to recruit football players. What I can say is that they seem have at the very least a cozy relationship with some of the biggest names in the street agent game.

As I alluded to earlier, street agents were once pretty much confined to basketball. Shoe money is a driving force behind AAU basketball. Nike is the company that invented the concept of shoe money and their founder Phil Knight just happens to be one of the largest single athletic donors in the country.

Could money be coming from shoe companies to help fund football street agents? Probably not directly, but it does flow into summer football camps, and 7 on 7 tournaments across the nation in the form of sponsorships. Where there is smoke there is fire and the NCAA will be taking a much closer look at the relationship between street agents and athletic programs over the coming year.

The Cam Newton incident at Auburn this fall really opened some eyes. He was being auctioned off to the highest bidder by his father but supposedly no money could be documented ever being received. The NCAA ruled that since Newton did not receive benefit and was unaware of what his father was doing this he could remain eligible and Auburn would not be punished.

Obviously there are some holes in the NCAA by-laws regarding third party relationships that need to be addressed more closely over the near term. I think it will be very interesting to see how the NCAA adjusts its rules to combat street agents.

For more information on the subject: