Share All sharing options for: Husky volleyball recruit rated top in the nation

Gatorade recently announced Krista Vansant of Redlands East Valley High School as its 2010-11 Gatorade National Volleyball Player of the Year. The prestigious award not only rewards Krista as the best high school volleyball player in the nation, but also recognizes her exemplary character off the court and strong academic accomplishments in the classroom. 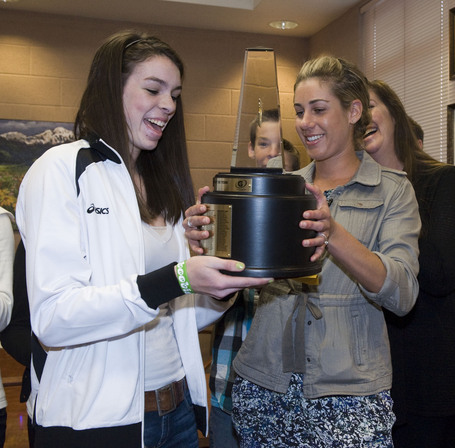 Krista was surprised with the announcement by World Champion and Pro Beach Volleyball player April Ross, who earned Gatorade National Volleyball Player of the Year honors in 1999-00.

Rated the nation's No. 1 recruit in the Class of 2011 by PrepVolleyball.com, Krista recorded 589 kills, 299 digs, 33 blocks and 26 service aces this past season while posting a kill percentage of .557. She has also been recognized as an Under Armour All-American and the California Interscholastic Federation Southern Section Division 1A Player of the Year. Krista has signed a National Letter of Intent to play volleyball on scholarship at the University of Washington beginning in the fall of 2011.