LSU players have been raving about something they are going to run this season called the "Wildcat". The "Wildcat" is the old single wing with a some new twists brought in to modernize it. Arkansas used it with great success a couple of years ago and David Lee who was with the Hogs back then brought it to the NFL last season for the Miami Dolphins who had success running it.

The "Wildcat" is a variation of the offense that was once used by Tubby Raymond when he was at Delaware. So it isn't something that is exactly new. That offense gained a lot of popularity with HS teams and in the smaller divisions of college football. Jake Locker ran a version of the Delaware Wing T while at Ferndale HS.

The "Wildcat" offense's key trait is that either the quarterback, running back, or wide receiver can receive a direct snap. ( You heard it right...the QB won't always receive the snap. Hence the difficulty the defense has reading the play.)

Bob Condotta of the Seattle Times covered the press conference yesterday and one of the LSU players made this comment.

"It's a killer," offensive lineman Ciron Black said of the formation. "It's going to gash a lot of people. They're not going to see it coming. The scheme that coach has got in right now is phenomenal."

The first advantage of course is deception because the defense has to read who has the ball. The most important advantage is you have an 11 on 11 blocking situation rather than a 10 on 11. In most offenses once the QB hands off or passes he is done for the play. In the Wildcat he is still out there blocking.

Defending a well run "Wildcat" is no easy task.  The only real defensive strategy is to lineup up in a man to man accountability zone that pits each player against one from the offense. To be succesful you have to have the same type of discipline you use when you go up against the triple option. One defensive option is to simply stuff the box when going up against the "Wildcat".  Solidifying the middle and forcing everything inside is a key component to stopping this package. Usually you put a man directly over center and punish him because he has to have his head down on every snap. Most teams then line up tackles directly over the guards which seals the interior. The LB's play close up and force everything inside.

In the initial version of the Wildcat used in college football by Arkansas (later adapted by other college and pro teams), the "Base Wildcat" is an unbalanced set with a guard, an eligible tight end, and a slot receiver on one side of center, and a guard, two tackles next to each other, another receiver, and quarterback on the other side.

In the QB Counter the hand off is faked and the one taking the snap (usually a running back) runs in the opposite direction with the ball. 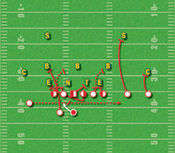 In the sweep the lefthand slot receiver or a TB is handed the ball while sweeping. Look for LSU to try to run a lot of this to take advantage of their speed. You think that may want Trindon Holiday to receive theball in this manner at least a couple of times? 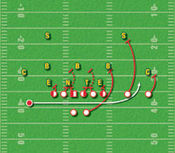 In "Split Zone", a basic inside zone run is used with the one taking the snap running directly upfield or cutting.