Share All sharing options for: The Monday Morning Wash

The first holiday of summer is almost over and, for most of us in the Northern climes, it is time to let our hair down a bit and enjoy the outdoors. For a college football fan, the next big marker on the schedule are the annual on-campus camps, typically yielding a few verbals.

Steve Sarkisian's first camp in late-June should have quite a few notable recruits from up and down the West Coast, presenting a strong departure from the regime of Tyrone Willingham. Tyrone had a major challenge attracting even the top local kids the last couple of seasons.

All eyes this June are still on a QB from Syline HS by the name of Jake Heaps. Recruiting analysts believe it all will come down between UW and BYU; if you listened to the Softy show the other day, however, Jake kept saying "we" in reference to the Huskies.

Feel free to read that in one of several ways. The most obvious to the Husky faithful, however, would be that he considers himself a Husky. The kid has been a Husky fan all his life; like most of us we do use the "we" vernacular when talking about our favorite team. Let's hope that "we" gets more solid later in the month.

Our editor Adam and his son Jared met new Husky mascot "Dubs" this past week while on a walk at a Seattle-area park. Dubs and Jared, two up-and-coming Dawg fans, were more than happy to share a hug! 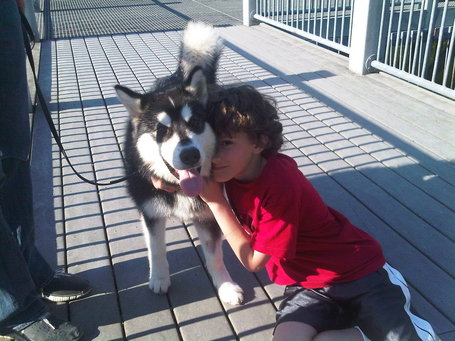 UW AD Scott Woodward raised some eyebrows this past week by suggesting the Pac 10 move to a revenue sharing model in the mold of the Big 10, Big 12, ACC, and SEC.

Since Washington is traditionally one of the have's in the conference why would they ever want to do something like that?

The reason is a conference is only as strong as its weakest link.

Conference commisioners who oversee leagues built on revenue sharing understand the ease in managing and creating revenue growth for all the members under a strict revenue sharing program.

One conference commisioner said that getting things done in the Pac 10 is difficult because of all the self-interest on the part of member schools.

For the record the Pac 10 is actually driven by the have not's rather than the have's. The dog eat dog mentality has slowed down or eliminated countless possible gains in overall revenue over the past two decades.

You wonder why nothing ever seems to get done in the Pac 10 in comparison to other conferences? The reason is the lack of a united front on almost all issues.

Woodward is from the SEC, meaning he has witnessed first-hand the success of revenue sharing. The SEC just happens to be the #1 revenue-producing conference int he country. The Pac 10 has always done well because of geographic isolation and lack of competition out West .  However, change is needed if they want to keep up and continue to lead the other BCS conferences.

One may agree or disagree with Woodward, but it is just another example of Woodward's continued thinking outside the box.

Have a great Memorial Day!