Husky Crew Prepares for the Head of the Charles

Share All sharing options for: Husky Crew Prepares for the Head of the Charles

It is the largest 2-day regatta in the world, with more than 8,000 athletes rowing in around 1750 boats in 56 events. It attracts about 300,000 spectators throughout Regatta weekend. The Head of the Charles Regatta is run by an office of 3 and approximately 1,500 volunteers. The regatta is hosted by Cambridge Boat Club, a rowing and social club founded in 1909 that lies just before the Eliot bridge, on the Cambridge side of the river.

The course is 3.2 miles long and stretches from the start at Boston University's DeWolfe Boathouse near the Charles River Basin to the finish just after the Eliot Bridge and before Northeastern University's Henderson Boathouse. The course is renowned for being challenging for crews to navigate without incident or penalty. The course contains 6 bridges to pass in order.  The Weeks and Eliot Bridges fall at sharp turns in the course, and collisions occur here more than any other part of the course.

Washington picked its men’s eight for the Head of the Charles the way it always does - by letting the oarsmen do it themselves. Everyone took the water in pairs at daybreak Tuesday at Montlake Cut for a 6,000-meter race, with the top four getting tickets to Boston.

"We’re leaving some very talented guys at home,’’ says coach Michael Callahan, whose varsity-of-the-moment will be bidding to become the first college crew to win consecutive championships here since Navy earned its fourth straight in 1983. 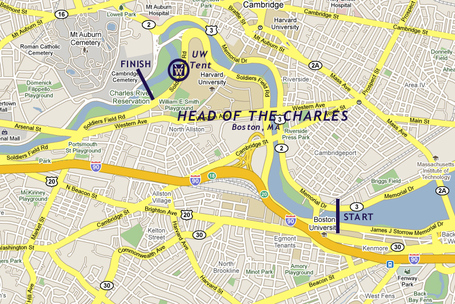